A storm is brewing in the United States following the publication of test results that claim to highlight flaws in Tesla’s Full Self Driving (FSD) software. The tests, carried out by an organisation called The Dawn Project, alleged that the system failed to detect and subsequently hit a child-size mannequin.

The tests were organised by Dan O’Dowd, founder of safety campaign group The Dawn Project. O’Dowd has been publicly critical of Tesla and its Full-Driving software, and even paid for a television commercial showing the results the tests.

In the ad, which urges the US Senate to ban the software, O’Dowd says: “This [Tesla FSD] is the worst commercial software I've ever seen. We need regulations that prohibit self-driving cars from driving on our roads until the manufacturer proves it will not mow down children in crosswalks.”

The safety test of Tesla’s Full Self-Driving was conducted at the Willow Springs International Raceway and test track in Rosamond, California on June 21, 2022. The vehicle used for the test was a 2019 Tesla Model 3 with Full Self-Driving Beta 10.12.2. This version, which was released June 1, 2022, was the most up-to-date software available from Tesla at the time of The Dawn Project's safety test. The tests were carried out at 24, 27 and 25mph, according to the report.

Although Tesla made no official comment following the release of the video, industry experts have been quick to highlight what appear to be serious flaws in the tests. During an analysis of the video footage released by The Dawn Project, Fred Lambert of American electric car channel electrek.co noticed that while the driver attempted to engage Full Self Driving, the system was not showing as active as the car approached the mannequin. Had the system been active, the display on the car’s main screen (which is visible throughout the test) would have featured a blue line in front of the car graphic.

Lambert explained: “The explanation is likely quite simple. Tesla FSD Beta still relies on map data, and this test was performed on a closed course at Willow Springs International Raceway in Rosamond, California.”

What’s more, Tesla’s instructions for FSD clearly state that the system is a Beta version and that drivers should always keep their hands on the steering wheel. The instructions, issued to drivers who use the Beta (test) version of FSD states: "Use FSD Beta only if you will pay constant attention to the road, and be prepared to act immediately.”

The Dawn Project has responded to questions by stating that the driver of the car, former Porsche test driver Art Haynie, had signed an affidavit confirming that he had engaged FSD during the test. The organisation also released additional footage that appeared to show the system was active during the test. However, in the additional footage, the screen displayed a series of warnings (telling the driver to re-take control) that only show when the car is travelling at speeds under 20mph. This, according to Lambert, is at odds with the organisation’s claim that all three tests were carried out at speeds above 20mph. 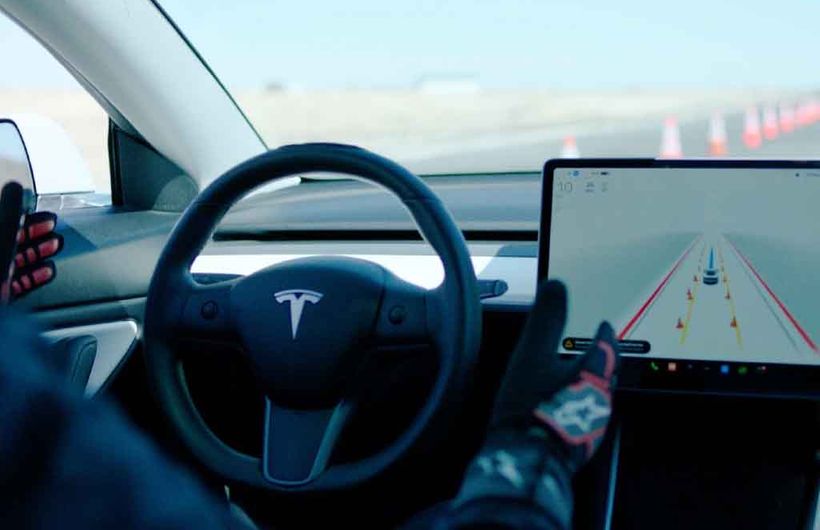 In-car images clearly show the system wasn't fully engaged, according to experts challenging the test findings
Continue the conversation in the Electrifying forum