“The e-C4 is another really useful, practical pure electric car that feels a little bit expensive when you compare it to its traditionally powered stablemates. But that doesn’t stop it being really very good at what it does. It’s a lovely place to spend time.”

“I like the fact that Citroen has managed to build a sensible five-door hatch but give it a really stylish feel inside and out. The range is good and the driving experience is wonderfully relaxed. This would make a fine family car.” 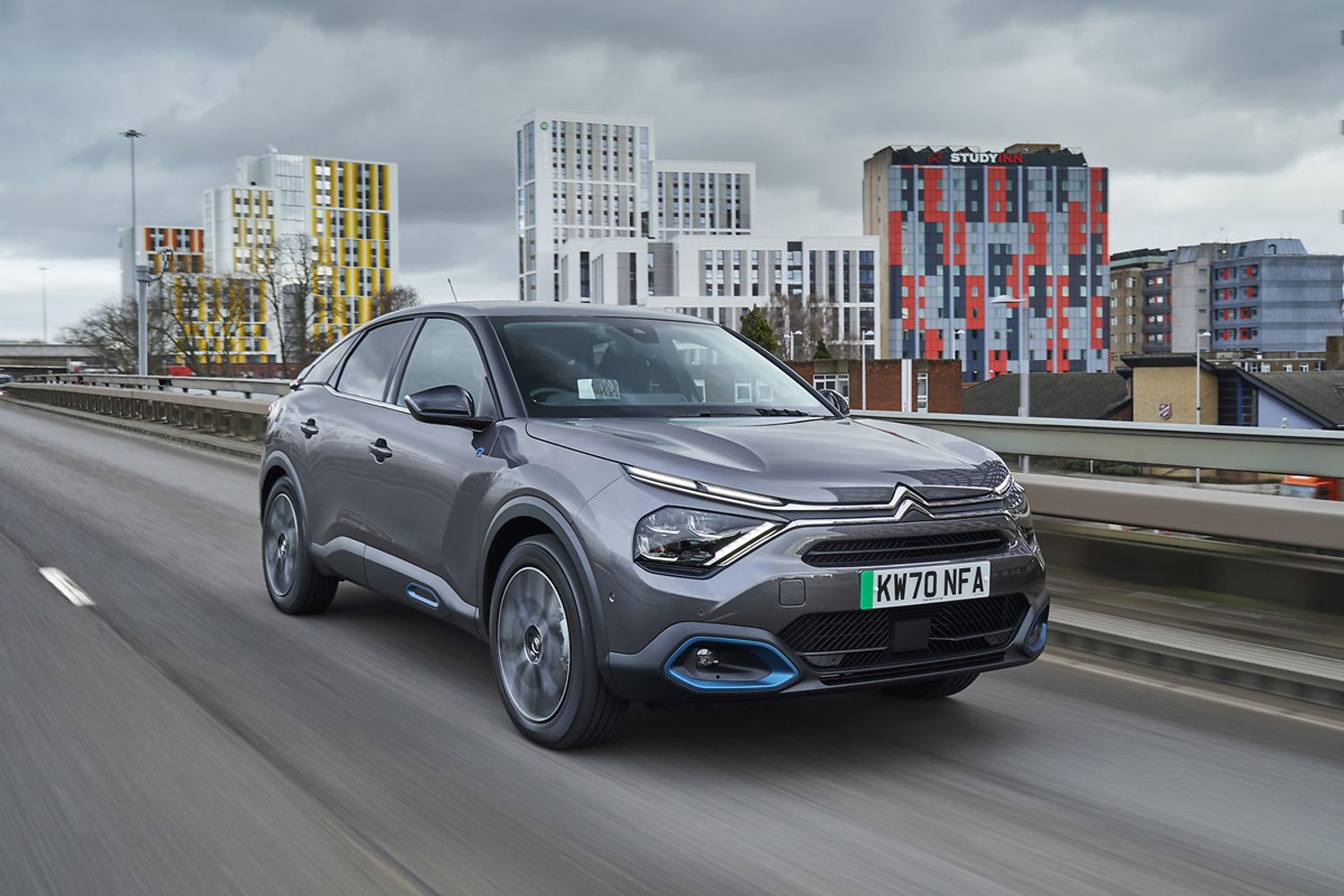 In the race to become the first mainstream car maker to really build an affordable electric family hatchback Citroen hasn’t exactly been troubling the scorers to date. Apart from a handful of plug-in hybrids that have been there or thereabouts and the crazy Ami city car, Citroen has seemingly been happy to watch stablemates Peugeot, DS and Vauxhall (the three other brands owned by the PSA Group) jump on the electric car bandwagon.

Citroen, finally, has its own fully-electric contender with a WLTP tested range of 217 miles. Cleverly, it’s pitching its newcomer – the snappily-titled e-C4 – not as yet another SUV, but as a family five-door hatchback. This might sound like marketing suicide given the car industry’s obsession with SUVs, but we think it’s something of a masterstroke. That’s because a quick look at the best-selling cars in the UK will tell you that the Volkswagen Golf, Ford Focus and Vauxhall Astra actually account for way more sales than SUVs do.

Prices for it are more in the family car sphere too, with the e-C4 starting at £29,995, Citroen offers the e-C4 with three trim levels: Sense, C-Series Edition and Shine Plus. LED headlights, head-up display, 18-inch alloys and climate control are standard on all models, as is the neat touchscreen infotainment system and reversing camera. Higher spec C Series Edition models add privacy glass and creature comforts such as keyless entry and heated steering wheel. Shine Plus adds leather trim, a better sound system and heated front seats.

In terms of design, the e-C4 strikes a neat balance between conventional and wacky. It’s daring enough to mark you out from the crowd, but not crazy enough to have kids laughing at you at pedestrian crossings. The swooping rear roofline gives it an almost coupe-like profile and the designers have done a great job in disguising the car’s height. The blue-rimmed vents at the front and side are particularly pleasing details in what is one of Citroen’s sharper pieces of design.

Vision seems to be pretty good, although the C-pillar is a bit thick, meaning there’s a chunky blindspot. Thankfully, the split rear windscreen isn’t as much hassle as the design suggests. It doesn’t really affect the view through the rear view mirrors, and that’s a good thing.

Another impressive aspect of the e-C4’s driving experience is the ride quality. Thankfully, Citroen has resisted the temptation to follow the herd and give the e-C4 a ‘sporty’ driving experience. The suspension set up has been deliberately skewed towards comfort, using what it calls ‘progressive hydraulic cushions’ that stay firm in the corners, and floppy on the bumps. The system was originally invented for rally cars, but here it works… really nicely. Better than in other modern Citroens, in fact, but don't expect it to be as soft as a classic Citroen.

Match that to the squishy seats, and the e-C4 feels genuinely relaxing - and yet when you drive around a corner, it doesn’t wilt, or flop about like overcooked pasta. Top job Citroen spring people.

Overall, there’s a lot to like about the e-C4. Comfortable, easy to live and nicely made, it does all the boring things very well. Which, when you’re trying to persuade drivers to make the switch to electric, is essential. But where the e-C4 really stands out is its design and attention to detail. This feels like a car that a team of designers and engineers genuinely enjoyed putting together. The exterior design is clever and contemporary while the interior strikes a lovely balance between style and practicality. It’s a decent package, but check out rivals such as the VW ID.3 and Kia Soul/e-Niro too.