If you need to move eight, or even nine people around using power from a plug, the ë-SpaceTourer and its differently-badged brethren are pretty much your only choice. Just as well it's good, then.

“The rules around tax liability for company cars and vans means that the ë-Spacetourer makes a lot of sense if you can run it through the company books. A recent price cut means it could make sense for private buyers too.”

“Ok, so it’s not got street cred and it’s more likely to be used for airport taxi duties, but if you happen to have a large tribe and want a pure electric vehicle that can haul them all, then you’re lacking options. The Citroen is one.” 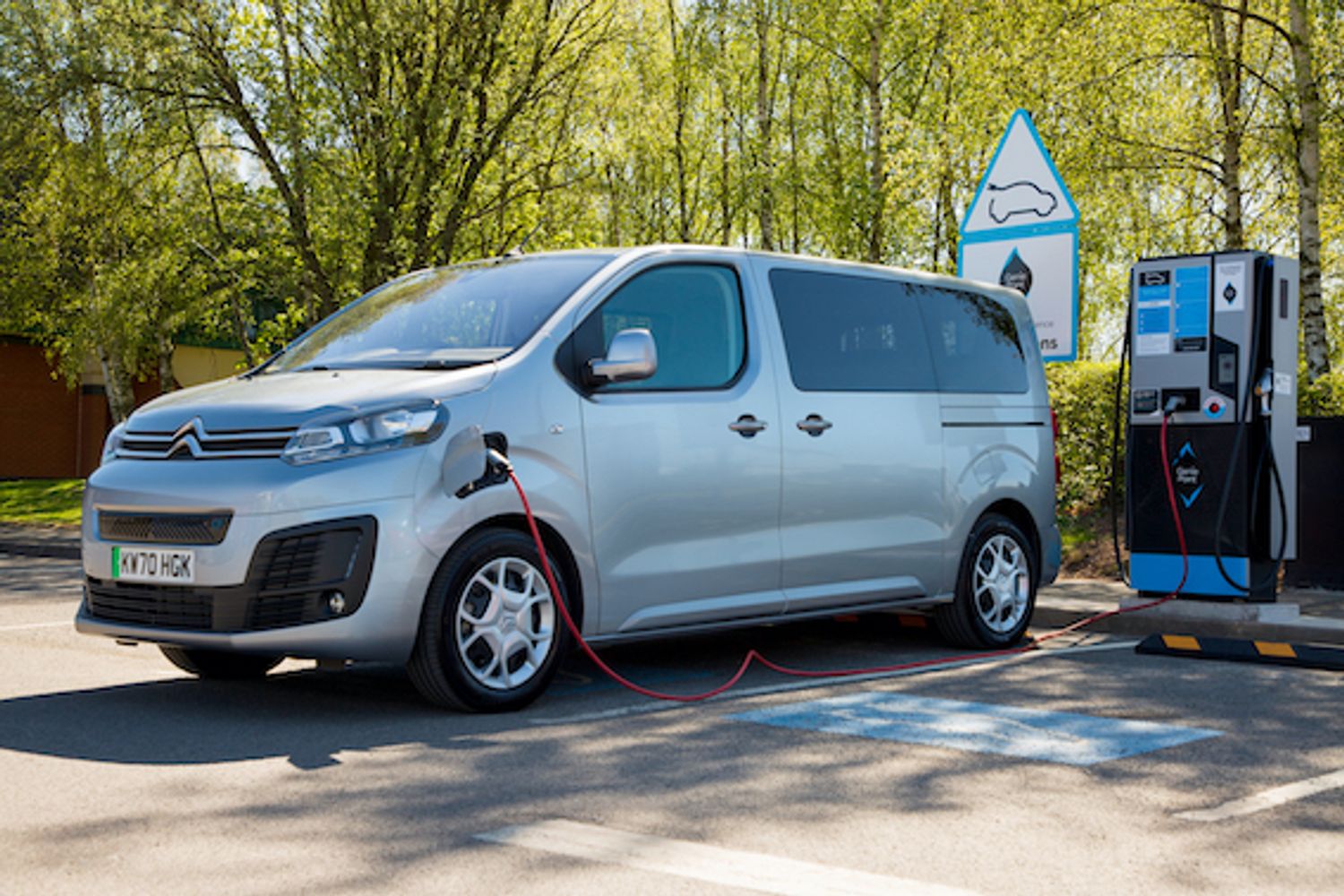 One of the most frequent questions we gets asked at Electrifying.com is about electric seven seaters. Even if you don’t have five offspring, the ability to take kids’ friends or family in one car is undeniably handy.

There are now a few fully-electric seven seaters available, but here is a car which goes one – or even two - better. The Citroën ë-SpaceTourer can seat up to nine people, and is capable of travelling up to 136 miles on a single charge.

There’s no escaping how Citroen has managed this feat of packaging: the ë-SpaceTourer is based on a van rather than being a car like SUV or people-carrier.

In this case that’s not necessarily a bad thing, as we’ve been impressed by the commercial version - which doesn’t have windows and seats in the back - when we tried the Vauxhall-badged version.

There are some compromises of course. Other than the boxy looks, there’s no escaping the Citroen’s commercial origins when you are sat in the ë-SpaceTourer. It’s comfortable enough, but the lack of carpets in the ‘Business’ version we tried and hard plastics are meant to be hardwearing rather than luxurious (although there is a plusher 'Flair' model).

There are various seating configurations available, including the option to have a three seat bench across the front row to make this a nine-seater – if you don’t mind getting up close with the other occupants.

The three second row seats come as standard with Isofix fitting points, making it one of the few cars which can accommodate families which three younger children. Disappointingly though, curtain airbags are an option rather than being standard. For a vehicle which is designed to carry people and especially families, that seems crazy.

If you’re not carrying anyone at all, the rear seating can be removed without the need for tools, increasing load space up to a maximum of 3,968-litres. That’s about double what you’d find in a large estate car. Accessing the boot space is tricky though. The ë-SpaceTourer has a tailgate which is simply huge, meaning you need to pull out of a parking space to access your luggage or put shopping in.

The driving experience is van-like too, but that’s not all bad. You sit up high looking down on SUV owners, but are further forward than in a car. This can be a strange feeling, especially if you’ve chosen the longer wheelbase version as there’s a lot of van behind you and it takes some getting used to on tight bends or when parking.

As with all van-based vehicles, the ë-SpaceTourer feels a little happier and less bouncy when it has some extra weight – in this case, passengers - on board, and as it is powered by electricity there’s no feeling that the performance tails off when hauling a load. You won’t need to rev an engine or slip a clutch to get this bus off the line cleanly which on a hill – you just take your foot off the brake and accelerate silently.

The ë-SpaceTourer is powered by a 50kWh battery connected to a 134bhp electric motor. This is the same set up which is used across a raft of cars and vans produced by Citroën, Vauxhall and Peugeot. As with those cars, the ë-SpaceTourer has three driving modes which allow you to cut the power and get more miles out of the battery, or choose a Sport mode for more acceleration and responsiveness. The differences aren’t as pronounced as in the cars we’ve tried and we suspect most owners will be happy to leave it in the default ‘Normal’ mode.

According to the official figures it can cover 143 miles on a charge, and our experience suggests the real world figure is nearer 115-120. That’s not hugely efficient – the Citroën is a big vehicle after all, and is never going to go as far as a Corsa on the same power – but it is plenty for a lot of business and private users, who will know what journeys they do on a daily basis.

When the time comes to charge, the ë-SpaceTourer can take a feed of up to 100kW for DC rapid charging, meaning an 80 per cent charge will take around 30 minutes. If you’re not in such a hurry, a 7kW domestic wall box takes 7 hours 30 minutes to completely fill the battery. There’s no option for faster AC charging, which may be a drawback for commercial users who have access to three-phase supplies.

It’s these business drivers who are likely to be the biggest customers for the ë-SpaceTourer. For taxi drivers, airport shuttles and courtesy bus operators it could well make sense to go electric though, as the diesel savings plus exemption from tolls and emission zone charges will soon add up. The better driving experience will just be an added bonus.