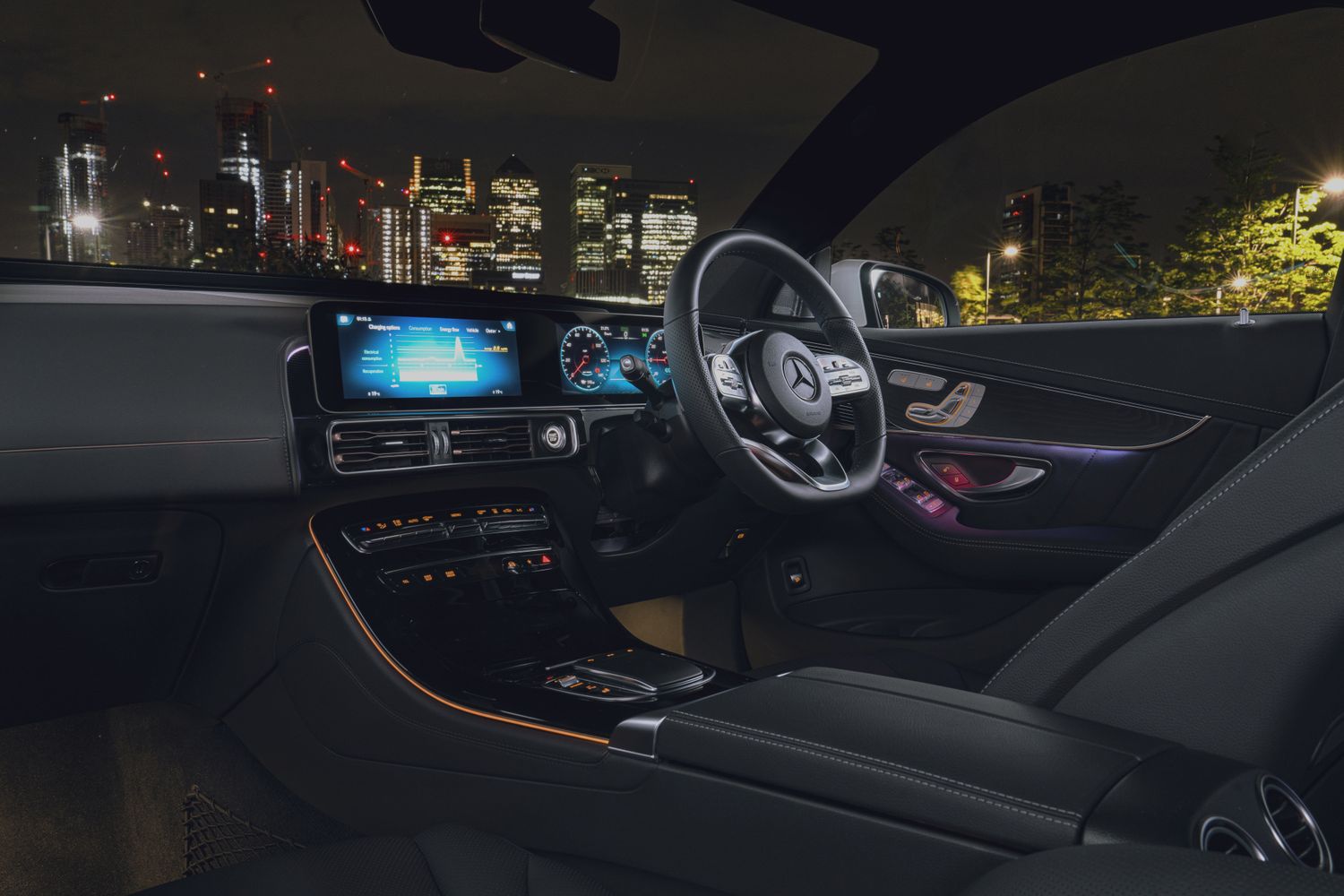 It might not be as big as some rivals, but the EQC should still be practical enough for most families.

The Mercedes EQC has almost all of the practicality you’d expect from a family-sized SUV. There are some compromises as a result of the batteries being housed under the floor though, with slightly less legroom for both front and rear seat passengers than you’d get in a petrol or diesel equivalent Mercedes GLC. It’s never uncomfortably cramped though, unless you are an adult stuck in the middle of the rear bench. It’s best to reserve this spot for kids or short journeys.

The boot is a perfectly respectable size at 500 litres and includes a couple of neat cubbies under the floor and to the side to store the cables. Press a button and the seats fold, giving you estate car-like load space and a neatly flat floor. While it will be big enough for most, it’s smaller than the Jaguar I-PACE or Audi e-tron and can’t get close to the van-like capacity of the Tesla Models S and X.

Mercedes has a reputation for pioneering technology on cars, with innovations such as airbags appearing first on the brand’s poshest models and a strong argument for creating the car itself with the 1885 Benz Cyclecar. The EQC is a bit of a tech showcase for Mercedes, with gadgets that are designed to make life with an electric car easier. There are plenty of screens inside of course and one of the best hi-fi systems you’ll find in any car, but rather than rely on the driver to constantly press buttons, the car learns to anticipate what settings you like over time, predicting the destinations for the navigation and changing the radio station from the morning drive to the evening shows you prefer based on your habits.

To make it even easier, the EQC uses voice activation (a bit like an Alexa in your house) to control many functions. It works pretty well, but isn’t entirely foolproof and can get confused.

The best tech though is the charging app, which links together most of the public charging points into one package for connection and payment, meaning you don’t have to worry so much about having the right card or connection to top up when you are away from home.

Mercedes has gone to some lengths to make sure the EQC is safe. The car is actually converted from the petrol/diesel GLC model rather than being designed from the ground up as an electric car (as with rivals such as the Jaguar I-PACE and Tesla Model X), which has meant the Mercedes engineers have had to work hard to make sure the passengers and battery are protected in a smash. One of the modifications actually involved making a steel box to take the place of the engine in the front of the car!

As you’d expect the EQC also has all of the electronic aids to help prevent an accident in the first place, and it will even read road signs and change the cruise control setting to match the speed limit. One neat technology which rivals can’t match is the PRE-SAFE system. This senses when an accident is about to happen and prepares the car to protect you by shutting the windows, tightening the seat belts and even playing a loud sound through the speakers to stimulate the occupant’s reflexes.