The Mission R is a technology showcase in the form of a future racing car. But much of what we see here will become the new Taycan and Boxster.

“It might just be a concept, but the Mission R is full of interesting innovations. I like the plant-based composites, while my son loves the idea of being able to take out the cockpit of a car and turn it into a simulator. ”

“A thousand-plus horsepower one-off sounds like just a little engineering fantasy. But there are styling cues for the new Boxster here - and apparently there might even be a Boxster-sized EV on the way. Not with 1000bhp, mind you.” 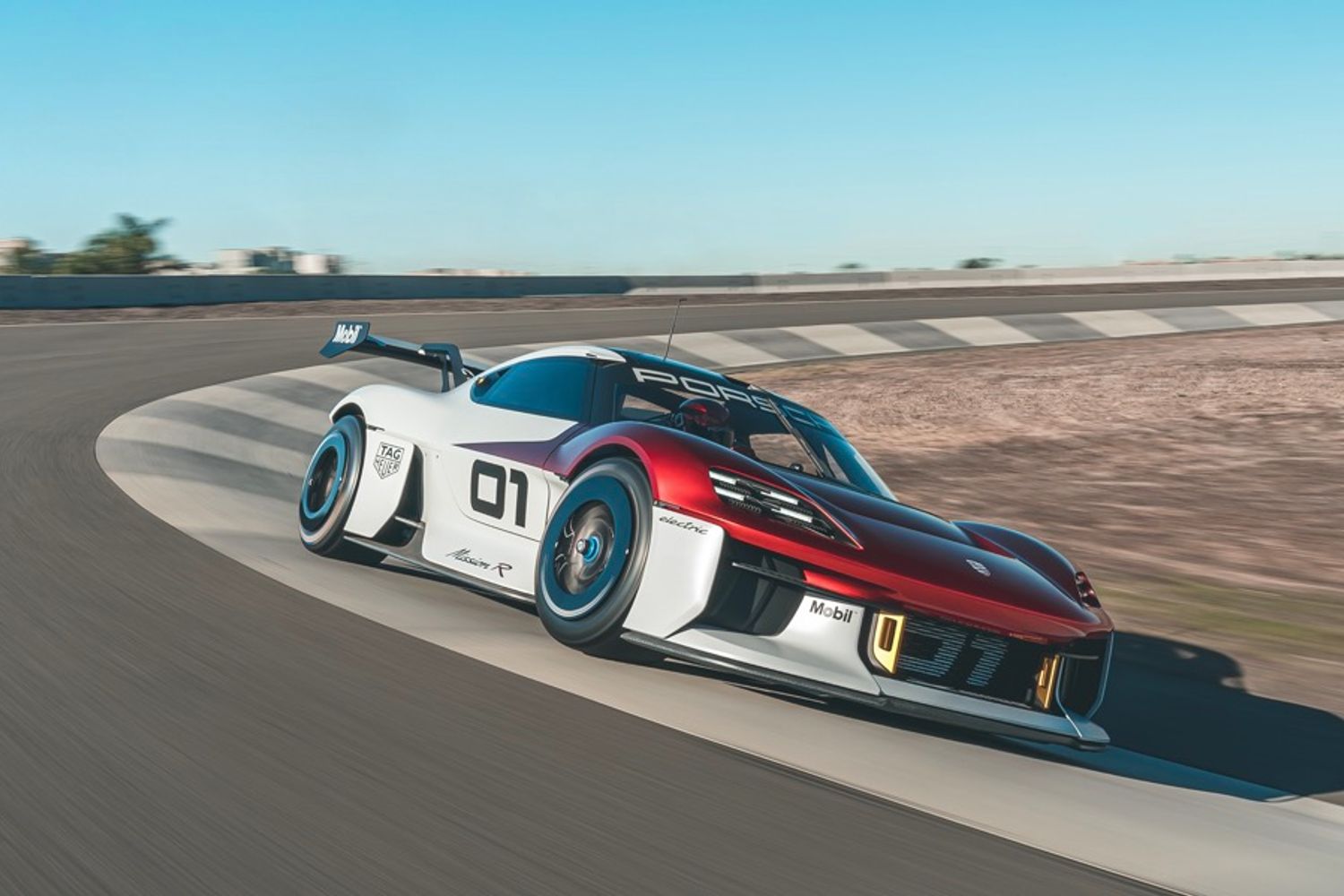 We’re at a Porsche test track in Los Angeles and there’s a race car out on the circuit. And yet there’s a surreal silence over the course instead of the usual roar of engines. The only noise is the occasional whirring and a woosh or air as a red and white streak sweeps through your field of vision every few seconds. This is the Mission R on its debut and it is being hammered around the handling course.

The Mission R is nothing but a race car, and doesn’t resemble any production model – yet. But Porsche revealed the Mission E in 2015 and it became the Taycan with very little change. Porsche doesn’t do show cars like this without a reason, and the rumour is that the Mission R – suitably tamed - is set to become the next Cayman and Boxster.

It’s a car which will need some taming before it can be unleashed on the public too, not least because they won’t be keen on the fireproof overalls the test drivers here are being forced to wear. The front and rear motors together produce a terrifying 1,100bhp in the most extreme ‘Qualifying’ mode.

Porsche has avoided the use of excessive electronics to help keep you – literally – on track too. While the Taycan is virtually a computer on wheels with the way it goes around corners dictated by an army of control units, the Mission R offers an almost analog experience: there’s no torque vectoring or stability control. Not even ABS and power steering are supposed to distort the driving experience. After all, this is not a PlayStation, but a track experience for the real world.

In the Californian sunshine this doesn’t matter much, as the Mission R is running race-spec slick tyres which stick like Blu Tak trodden into a carpet. There’s a full aero package too, which holds the car tightly to the track as the speed increases. They’re not going to save you if you make the most of the Mission R’s performance, but they make the cornering grip limits almost supernaturally high.

We are restrained during the first few laps, but as the temperature of the slicks increases, so does our confidence and pace. The car is perfectly in balance, and the sprints on the few straights become more committed, the braking points shift backwards and the times shrink lap after lap.Right, left, right, a few degrees of turn on the steering wheel is all that’s needed, so direct is the steering. And although the whole thing looks quite violent from the outside, it feels smooth and harmonious inside.

After just a few minutes you are in the flow.The whole car weighs less than 1,500 kilos thanks to a carbon body and lack of luxury equipment, meaning the 0 to 62mph sprint takes only 2.5 seconds and only comes to a halt above 180mph, the chief engineer promises. On our short circuit we will never find out, but we have no reason to doubt the figures – in fact Porsche has a reputation for under-reporting its real performance.

The battery is high performance too, with 82 kWh of capacity which is enough for 30 minutes of frenzy and can then be charged from ten to 80 percent within 15 minutes. This is all packed into a 4.3 metre long body made of carbon fibre and a new composite materials made partly from plants.

What about the silence of the electric car? It may be desirable in a Tesla or Taycan, but does not in Mission R! Where even the most powerful electric cars sometimes feel quite sterile, there is a lot assaulting your ears here and driving becomes a literally sensual experience again.

The structure is also innovative. Instead of using a metal roll cage as is the normal practice in a race car, Porsche have constructed crash protection made of carbon and made it part of the body as in an exoskeleton. Besides looking good, it saves a lot of weight. The interior does have a nod to the Playstation generation though: because the entire cockpit is designed as a module, it can be removed together with the chair and then used in a special seat box as a simulator for racing games. This allows Porsche drivers to train in the same environment in both the real and virtual worlds.

How will a production version fit into the future Porsche range? After all, it will surely be faster that a 911. That car is not yet ready for retirement, especially since Porsche is researching artificially-made E-Fuel to try and save the combustion engine for the brand's most important model. But how convenient that the 718 Boxster is slowly entering the home straight of its life and could take off in the middle of the decade as an electric sports car from Porsche.

It might not be quite as exciting as the Mission R once the realities of production and regulations have been incorporated, but it’s a good indication that driving enthusiasts have little to fear from electrification.