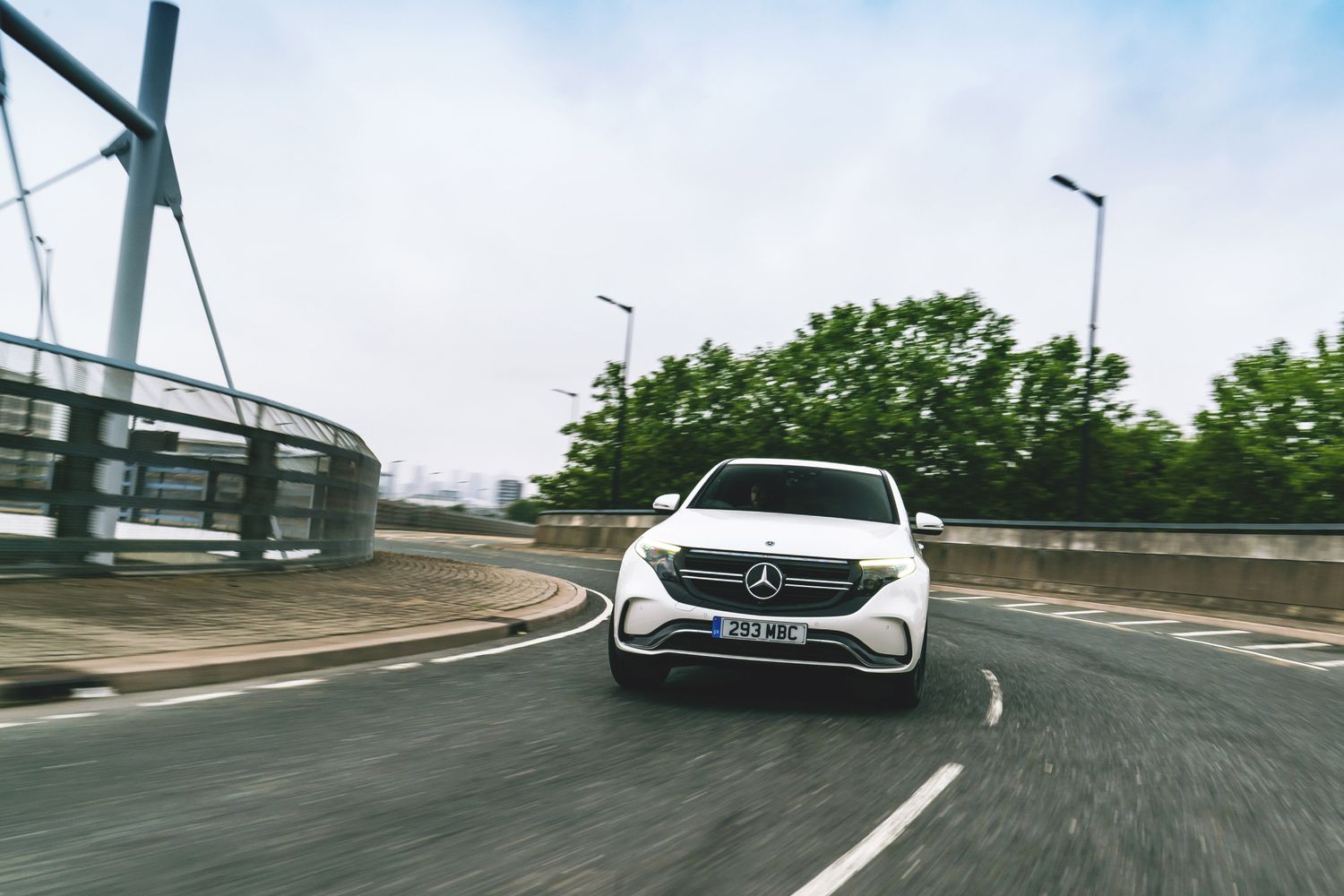 There doesn’t appear to be many EQCs available used yet – but ask around and you can find some. Used supply will undoubtedly increase as the model gets older and more common.

Nearly all manufacturers are currently underway with bringing their own electric models to market. We’ve seen this really ramp up in recent years, with companies that had initially looked a little hesitant to adopt a battery-electric powertrain now quickly making the switch to EV powertrains. One such company is Mercedes-Benz. Traditionally at the forefront of car technology, the German firm was unusually distant from solely electric vehicles for some time, rectifying that with the introduction of the car we’re looking at today - the EQC.

Launched under the branding of ‘EQ’ - Mercedes-Benz’s new electric-only sub-brand - the EQC is paving the way for a whole new line-up of battery-powered models and has already given us a bit of an idea as to the direction the company is heading. Despite being relatively new to the market, there are a few used examples of the EQC cropping up online - so let’s take a look at everything you need to know about this high-end electric car.

Since the EQC is relatively new to the used car market prices haven’t had all that much time to fall. A brand new EQC will set you back just over £65,000 and though there aren’t a huge number of used options for less than this, they are there should you look hard enough. We found cars with low miles for around £56,000, so this does represent a decent saving over a brand new option. There are currently no high-mileage EQC models on the market, given that it was only introduced towards the end of 2019. Since the pandemic affected many people’s driving habits during 2020, it’s little surprise to see that very few high-mileage EQCs exist.

However, since the EQC stands as one of the key cars in Mercedes-Benz’s electric stable, it’s packed with standard equipment. There are just two trim levels available - Sport and AMG Line - with the vast majority of used examples favouring the latter. This brings larger alloy wheels, but all cars do boast a large central touchscreen, digital dials and all manner of additional functions.

Mercedes went on a particularly futuristic path for the design of the EQC, bringing in a host of touches designed to make it look as striking as popular. It’s certainly been a successful process - the EQC is really head-turning out on the road. This is mainly down to the sleek front end, which incorporates headlights connected via a full-width light bar that looks particularly impressive at night when it’s lit up.

Around the back, there’s an equally eye-catching full-width rear light which gives the EQC a lot of impact at night.

Inside, the EQC uses the same ultra-wide screen setup that we’ve seen on some of the latest Mercedes models such as the most recent E-Class. Essentially, it combines two wide screens to form one section of glass, which creates a wraparound effect to the whole display. Here, you access media and navigation functions while ahead of the steering wheel is where all key information such as speed and range is displayed. It’s a really clever piece of technology.

You also get a central touchpad controller which you’ll use to select different menus and readouts. Then, on the multifunction steering wheel, you’ll find dials and buttons for the cruise control, as well as those to change the look of the drivers’ display ahead of you.

With one of the latest electric powertrains, the EQC really is at the top of the technology game. It uses an electric motor on each wheel bringing 408bhp, which is then linked to an 80kWh battery for a claimed range of up to 259 miles. The healthy amount of power that the EQC’s setup brings means that it’ll do 0-62mph in just 5.7 seconds and hit a top speed of 111mph, too.

The amazing thing about the EQC’s performance is that - like nearly all electric cars - it accelerates without any delay. Whereas with a conventional petrol or diesel car there’s nearly always a short pause between pressing the accelerator and moving forwards, there’s nothing of the sort in this electric Mercedes. It means that you get really exciting performance at slower speeds and gives you the ability to make the most of gaps in traffic or even when merging onto a motorway or dual carriageway.

As you’ll find with most electric cars, the type of driving that you usually do will have quite the impact on how much range they return. For instance, you might find that over longer distances on the motorway, the range will deplete more quickly than if you were just pottering around town.

There’s just one battery choice with the EQC - that 80kWh version - and given that it brings a range of 259 miles should prove to be more than enough for most drivers. Though this is just the claimed range from Mercedes, we’d expect that you should still see in the region of 230 miles during regular use. This could drop during colder weather, mind you.

Though the EQC is relatively new and, as such, there hasn’t been all that much time for issues to be raised, there has been a single recall. Issued in October 2019, this recall was sent out

because of a potential problem with a bolt in the front differential. Over time this part could wear out prematurely and would cause the car to essentially ‘stall’. Mercedes said that if broken bits of the bolt became lodged in other parts of the car’s differential it could cause the front wheels to lock and, as a result, it would be hard to control.

It’s then absolutely paramount that if you’re looking at a used Mercedes-Benz EQC that you ensure that this work has been carried out.

Charging an electric car is a crucial part of the whole experience and it’s in this area where the EQC is particularly accomplished. It’s capable of receiving up to 110kW of charge - a particularly rapid rate - which will deliver a 10-80 per cent charge in just 40 minutes. If, like the majority of buyers, you’re looking to top the EQC at home using a wallbox, then a 10-100 per cent charge conducted in this manner will take 11 hours. It’s quick enough that an overnight plug-in will leave you with plenty of range in the morning.

The EQC is an impressive first foray into the fully electric market for Mercedes-Benz. It brings all of the premium features you’d expect from the brand, but also delivers a cutting-edge electric setup with more than enough range for most drivers. It’s handy that it can be charged at rapid speeds, too.

It’s bound to prove to be a popular car for the firm too, which will result in more cars entering the used market. So as time goes on, the EQC will no doubt prove to be an excellent used car.