Mazda has revealed a new plug-in hybrid version of its MX-30 SUV, previously only available in fully-electric form. The new version, badged MX-30 e-Skyactiv R-EV, combines a battery-electric powertrain with an interesting source of petrol power.

Mazda’s historic connection to the Wankel rotary engine has seen the firm launch iconic sports cars using the pistonless combustion method in some of its most iconic sports cars, and has powered the firm to Le Mans 24 Hour victory too. Now, this unconventional power source has been revived for the electrified era.

Officially, the new MX-30 is a ‘range-extender’ hybrid. This means the petrol engine is not there to provide any direct drive to the wheels, and instead acts purely as a generator for the MX-30 R-EV’s compact battery pack, providing additional charge when required and ‘extending’ the range that would otherwise be possible.

The compact rotary engine isn’t even a litre in size, with a capacity of 830cc. It provides charge for a compact battery 17.8kWh in capacity (that’s smaller than the all-electric MX-30’s, about half the size), which in turn powers a 168bhp electric motor.

Were that 17.8kWh battery to be all by itself, Mazda says that the vehicle would have a range of just 53 miles. But, the 830cc rotary engine means that it can be intermittently charged while on the go, with a 50-litre fuel tank providing enough energy to recharge the battery several times over. Between plugs and pumps, the MX-30 RE-V can cover over 373 miles, claims the Japanese brand, while delivering CO2 of 21g/km.

This will be disappointing news for company car drivers however, as the figures mean it will be taxed for benefit-in-kind purposes at 8%, compared to the 2% of the pure electric and 5% of the most efficient PHEVs with longer electric-only ranges of over 70 miles.

It also means that, the MX-30's remaining 320 miles of claimed range using the petrol engine once the battery is depleted will be at an alarming 29mpg - that's the same as a petrol-powered new Range Rover.

Using a plug to recharge, the R-EV's battery will take around 50 minutes to 'fill' using a 22kW AC feeds, but plug into a roadside rapid charger and the battery can be fully replenished in around 25 minutes.

You can choose from three drive modes while driving the MX-30 R-EV. Normal is the default mode, and prioritises battery-electric running, before coaxing the small engine into life to provide additional charge for the battery. If you put your foot down, the engine will also be activated.

EV mode means the MX-30 R-EV will run on the battery and electric motor only for as long as possible, until the pack is completely drained. The engine will then fire into life, to keep you going, but putting your food down and the accelerator through the kickdown point will summon the petrol generator. A Charge mode means that you can set a threshold for the minimum amount of power remaining in the battery, before the generator begins to recharge it and maintain it at that level - handy if you know you need to drive in a city.

In terms of appearances it’s really no different to look at than the fully-electric MX-30, save for some unique wheel designs and badging. Pricing starts from £31,250 for the car in Prime-Line and Exclusive-Line trim - exactly the same as the fully-electric version. Makato trim commands a £450 premium over its electric alternative, from £35,945.

A special-edition launch version badged Edition R is exclusive to the MX-30 RE-V line-up, with just 400 coming to the UK priced from £37,895. These come with a colour contrasting roof in maroon, and with several nods to the car’s new rotary engine throughout the interior.

All versions of the MX-30 RE-V are available to order now, with Mazda targeting first deliveries in the summer. 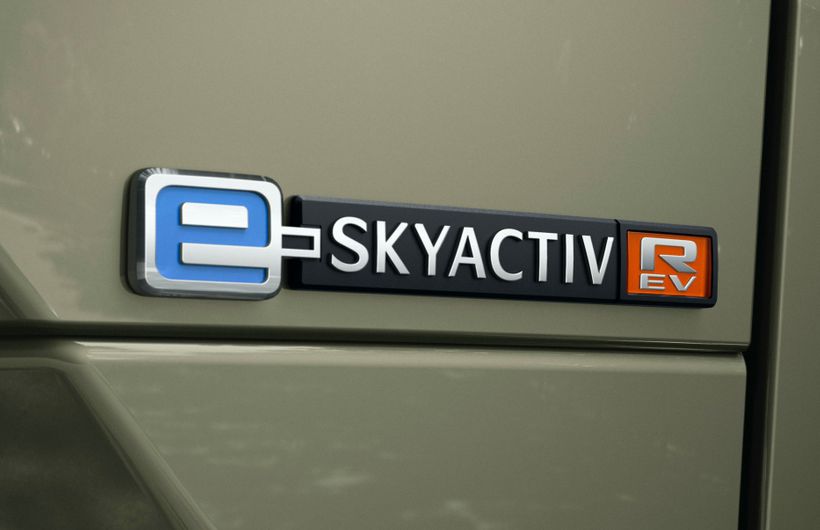