Audi's revamp of its big electric SUV has given it the range it needs to stay competitive and it is a thoroughly nice car to drive. Just don't expect great efficiency.

“After attempting a few long journeys in the old e-tron, I can see why customers demanded more usable range. Audi's solution - a bigger battery and more efficiency - is welcome but not revolutionary.”

“Another one of those big-manufacturer SUVs that tries very hard not to offend. Not as sporty as a Jag I-Pace, as challenging to look at as a BMW iX or as devisive as a Tesla, the Q8 e-Tron is for Audi SUV owners who don’t want to be intellectually challenged.” 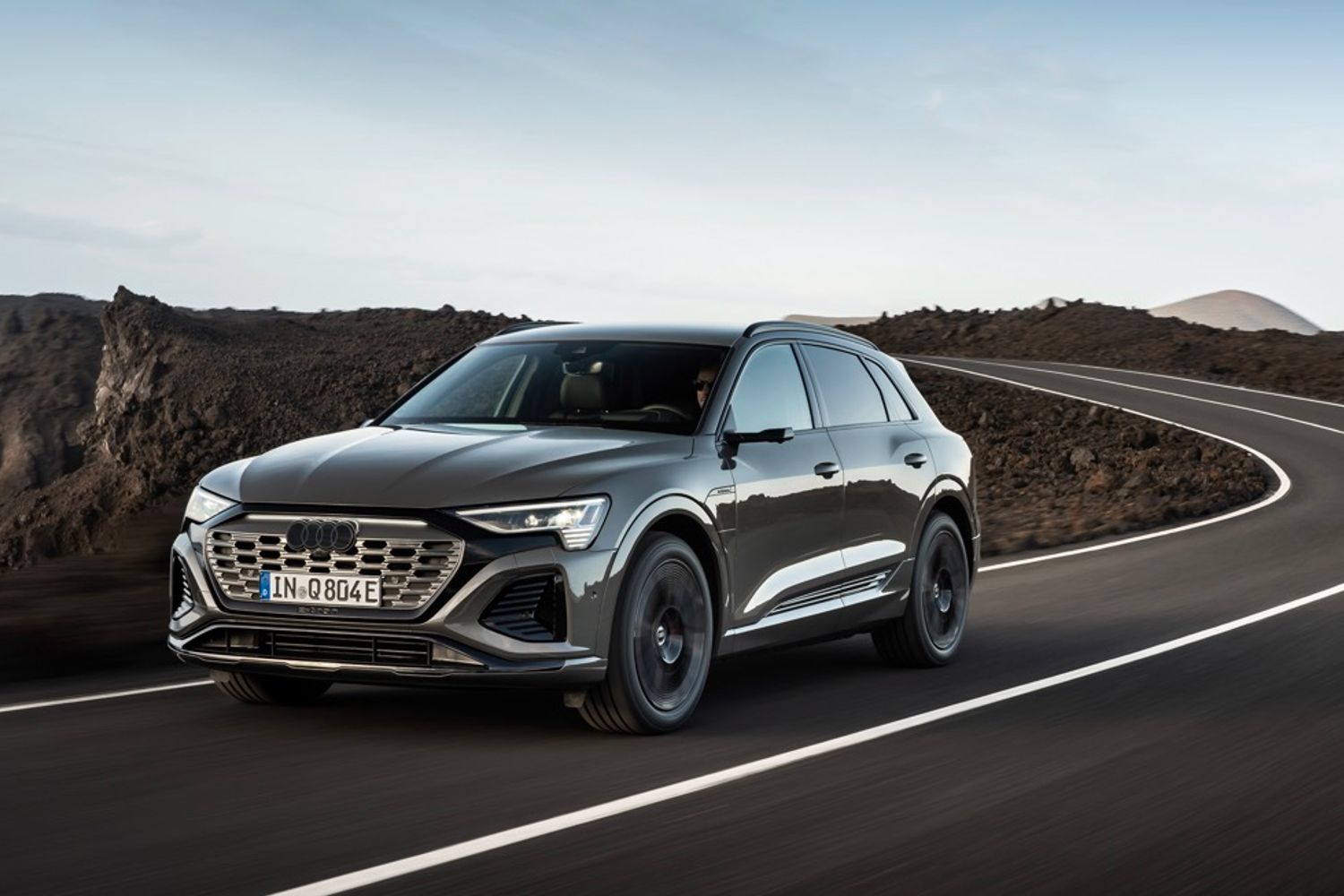 In the normal order of things, after a car has been on sale for three years or so it is given a mid-life facelift to keep it looking fresh. This usually includes a few tweaks to the looks and maybe an extra feature or two and possibly a small upgrade to the mechanical bits.

But in the world of electric cars, this is not going to be enough. Technology is moving so fast that sometime big changes are needed to keep a car competitive.

The Audi e-tron is a car which was falling behind the curve, and needed an upgrade. It wasn’t just us that thought the big Audi’s range and efficiency weren’t good enough – the company’s customers said so too.

The cheapest version of the outgoing model had a 64kWh battery which gave it an official range of 181 miles – but that was 150-160 miles in the real world. Buyers expect a big family car like this to be capable of distances beginning with a ‘2’.

The bigger battery version was better, with a range of 223 miles but even that would struggle to break the 200 barrier in normal driving. Considering it had a massive 89kWh power pack, this meant it was expensive to run and took an age to charge too.

As a result, Audi’s engineers have been beavering away to ensure the new car is much more competitive. They have crammed in more kWh into the same physically-sized battery and make the car more efficient with a series of little improvements to the motors and aerodynamics.

The entry level into Q8 e-tron ownership is the 50 Sport. With the bigger battery and other improvements, the price has inevitably risen compared to the old car, with this cheapest model now costing £67,800, up from the £62,785 of the outgoing model. The Sportback adds another £2,500 to the bill.

The top-end SQ8 e-tron and Sportback e-tron, priced from £98,295, are driven by three motors. Their boosted performance amounts to 496bhp, with a range of up to 284 miles for the SUV and up to 295 miles for the Sportback.

There are different trim levels of course and a whole host of other options which will push the price of a well-stacked Q8 e-tron easily into six figures.

Audi’s engineers showed us all sorts or graphs and charts to show us how and where they had improved the e-tron to become the Q8. These mainly centred around the steering and ride comfort, which were the areas current owners had complained about most.

They seem to have made a difference too. The steering certainly has good feel, although the heaviness suits the sportier SQ8 models more than the more relaxed nature of the standard versions. The ride comfort is well-judged too, with the standard air suspension’s computers working out the best way to soak up bumps and control body roll. There are different modes, including an automatic setting which is meant to use sensors to work out the best of all worlds, but in reality all three are automatic but just have parameters which favour comfort or dynamic ability.

Computers also look after the brakes, as there is no direct hydralic connection between the pedal and the pads. It is all done by computer, which allows the Audi to make the most of regeneration and only bring in the old-fashioned friction brakes in 'stamp on the pedal' situations. It’s so effective, the car has a ‘cleaning program’ to stop the discs going rusty by giving them a little rub once in a while.

Again, there is an auto setting on offer, this time for the regen. It takes some getting used to if you are a fan of one-pedal driving, but it makes sense. The car senses bends, speed limits and other traffic in front and brings in the regen accordingly. If you lift off on an empty road, the car simply ‘glides’ as this is better at preserving energy.

When you want top speed up again the Q8 feels perfectly fast enough, and the S Q8 has the extra punch you’d expect. It’s well-judged, without the sometimes shockingly sudden surge of a Tesla.

There are still some areas of irritation though. While the wind noise is hushed – at least with the cameras replacing the mirrors on the cars we tried – the Q8’s calm demeanour is slightly spoiled by tyre roar on harsher road surfaces. The motors are surprisingly noisy too, with an audible whirr especially at lower speeds in the tri-motored S Q8.

The Q8 e-tron’s range is now comparable or better than the obvious rivals in the class, although it does so using the blunt instrument of a big battery rather than exceptional efficiency, despite the numerous improvements in the new model.

The only real wrinkle in the comparison charts is the Tesla Model Y, which is cheaper and goes one mile further than the Q8's best effort on a smaller battery, making it cheaper to run too.

If you really care about the range, then you can specify the Virtual Door Mirrors, which replace the traditional glass with aerodynamic cameras and screens. This adds 2.5 miles of range, which might be welcome if you are 2.5 miles from home and the battery light is flashing, but is otherwise a nonsense. To recoup the cost in energy savings you’d need to drive 10,000 miles per year for more than a century, and you’d be driven nuts by cameras’ inability to show you where to place the car while parking.

All models have more sensible methods of improving the aerodynamic performance however, including ‘dynamic curtains’. This sounds like something hanging over the windows of your neighbourhood busybody, but is actually a series of blinds which close over air intakes when there is no cooling needed.

The charging performance has also been improved for then new car, rising from 120kW to 150kW for the lower models and 170kW for the 55 and SQ8 e-tron versions. 22kW AC charging is an optional extra, but at £1,750 you’d need to be really keen on getting the watts in quickly to specify it over the standard 11kW.

Those figures don’t look particularly impressive compared to the 200kW+ claimed by rivals, but the Audi engineers proudly point to a flat-topped graph which shows the Q8 can maintain that maximum for longer rather than peaking at a higher number for a short time. They promise this means you’ll not spend any longer at the charge point than key rivals.

On our test drive we weren’t going to get close to Audi’s claimed figures however. On hilly but not fast roads at a perfect 20 degrees Centigrade we were averaging a distinctly average 2.4 miles per kWh.

The Q8 e-tron is a big car as comes with the space to match. There’s plenty of space to get comfortable in the front and back, although it doesn’t have the airy feel of a Model Y or a BMW iX.

The Audi’s boot is big but seems shallow, although there is an inexplicably large space under the boot floor to hide things too. If you are so inclined you can fill this space with a temporary spare wheel for an extra £350 – a real rarity for an electric car.

The interior generally feels far more familiar and traditional than a Model Y, BMW iX of even an I-Pace, which might be viewed as a positive by some. The infotainment is easier to use than most Volkswagen Group systems too, mainly because there is a separate screen for the heating and ventilation. There are still bugs though, and the car can get confused if asked to do simple things like reroute the navigation.

The quality of the materials is impeccable however, as you’d expect, and there are enough cubbies and cup holders to ensure you lose your phone, keys or wallet.

The Q8 e-tron has had some improvements that look hugely impressive on paper and in the main these translate into a much better driving experience too. There’s no doubt the Audi is a nice place to be and now has the range to ensure that you shouldn’t need to stop for a charge on even short jaunts.

The fact is Audi has done just enough to keep its electric SUV looking competitive. Rivals are still more efficient, bigger inside and occasionally better value too. But add up the e-tron’s point tally and it still does well enough to deserve a place on a shortlist.