Bentley’s first trip into the luxury plug-in hybrid sector. Traditional Bentley craftsmanship without typical Bentley mpg… as long as you remember to plug it in.

“Massive SUVs really aren’t the best if you’re looking to go greener, but if you must have a posh, plush plug-in, then this is right up there.”

“Not the most desirable Bentayga - the V8 fits that bill - but a decent semi-electrified luxo-barge that allows for limited urban EV-only running.” 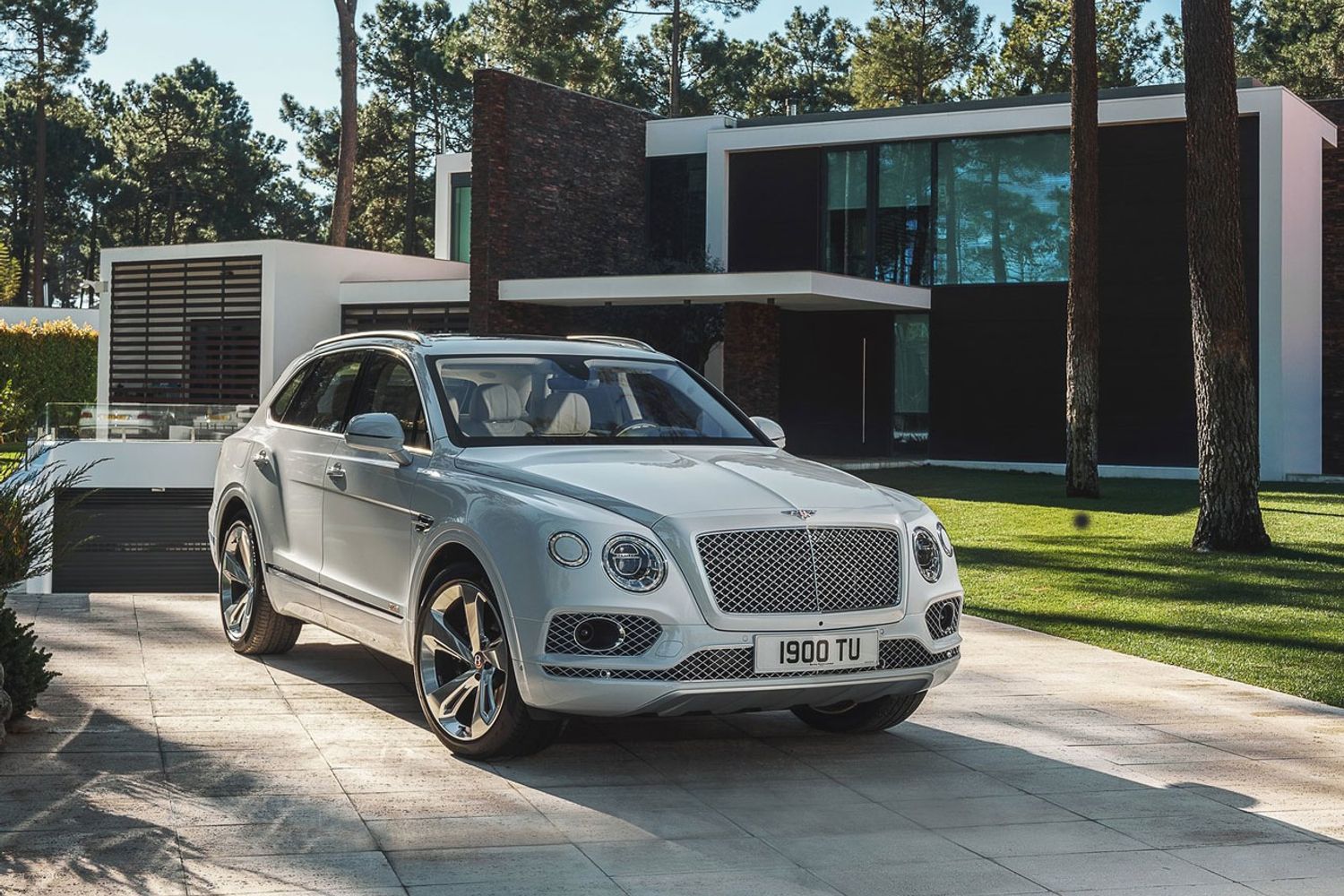 A hybrid powertrain in a Bentley might seem like asking for a side salad instead of fries with a gut-busting burger. But it has tax advantages, will save on fuel and might mean you can still drive into low emissions zones without having to give up your four-wheeled opulence.

Bentley calls the Bentayga Hybrid the ‘World’s first super-luxury hybrid’ and it is probably correct - although the Porsche Panamera Turbo S e-Hybrid is notably quicker and more expensive, it certainly errs on the side of sporting intention rather than wafting luxe. Still, you get a Bentayga with all the usual gorgeous craftspersonship front and centre, all the traditional tropes hand-stitched into the big SUV’s very being.

You also get a 126bhp electric motor wedged between the 3.0-litre V6 turbo petrol engine and the gearbox, giving the Hybrid a total system output of about 443bhp. If the maths don’t make sense, it’s because both powerplants don’t necessarily do their thing at the same time. That equates to zero to 62mph in 5.5 seconds and a 158mph top speed - so this block of high-end flats is certainly no slouch. There’s a 17.3kW battery wedged under the boot floor, providing an EV-only range of about 25 miles from a full charge (more like 15-17), which does the usual incomprehensible long-division of the efficiency figures to give a potential for 124g/km of CO2, or  - more understandably - roughly 80mpg. A figure even a light footed supermini would struggle to reach, and that’s from a 2.6-tonne, four-wheel drive salute to knurling. This actually makes more sense than it sounds like: big SUVs are popular in cities for some unfathomable reason, and anything that can make them hit a little less polluting is probably a good thing - if you don’t ban them altogether.

As long as you plug them in regularly, of course. The Bentayga does replenish the battery when driving - but only when braking, not from the engine - so gaining yourself extra EV-only charge takes quite a lot of mooching about. To drive, it’s good, but not great - and certainly not as eerily fast, stable and quiet as it’s pure combustion brethren - unless it’s in EV-only mode, at which point you may fear that you’ve actually fallen deaf. There are a few different modes to choose from, so if you want EV-only on demand, you can switch to ‘electric’ mode, and the car will exhaust its batteries before switching to petrol power - unless you push past a certain point on the throttle and then the combustion engine kicks in anyway. Or you can press ‘Hold’ which saves up the electric range until you really need it, or alternatively, whack your destination in the sat-nav, and the Bentayga will work out the best way to use the EV only juice. This is probably the most useful version we found - even if you know exactly where you’re going, you’re telling the Bentley how to plot its reserves.

So. The Bentayga hybrid is a good car, but feels like a first toe in the water. A bigger ev-only range would make it much more useful, and if you fail to plug it in, you’re essentially dragging around the heavy hybrid bits with a hard working 3.0-litre V6 petrol engine. And that 3.0-litre is the least Bentley engine ever fitted to a Bentley. But that’s exactly what this is: by 2023 there will be an an electrified version of every Bentley on sale, and the company says that in 2025, they’ll release a pure EV. But more than that, Bentley - a bastion of old-school - has made its Crewe factory completely carbon neutral. One hundred percent of its electricity comes from either on-site solar or renewable suppliers and the factory has 10,000 solar panels  - that’s about 7.7 Megawatts- worth - enough to provide energy for 1,750 houses.

The Bentayga Hybrid isn’t perfect, but it’s got all the right bones. If it’s used as intended - not a given, I’ll grant you - then it could give all those SUV-obsessed urbanites something to gad about in that provides the super-luxe experience without the planet-burning effects. Or some of them, anyway.