“I've nothing against the hatchback e-C4, but it's a car which is easy to forget as it's not really the best at anything, except maybe ride comfort. The addition of a boot will do little to change anything.”

“I really like the direction Citroen is taking with its bold designs and focus on comfort. But the e-C4 X feels like a car which is designed for another market and is just in the UK to make up numbers.” 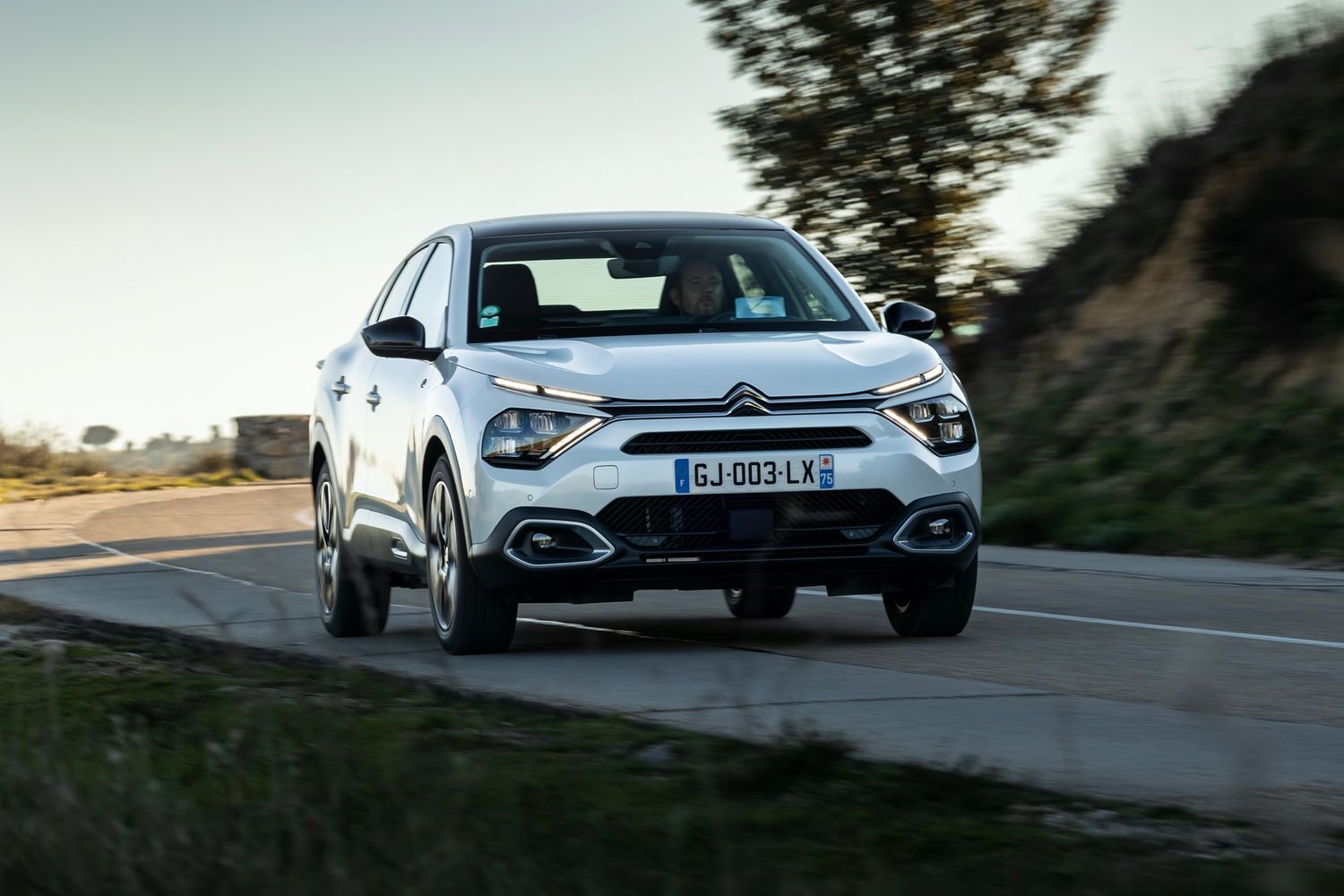 If you desperately need all the good points of an e-C4 hatchback but with a larger boot and rear seats that are more reclined, the e-C4 X could be ideal. However, due to its less versatile four-door saloon car body, it’s essentially a unique proposition and one that’s hard to see being popular in the UK.

Citroen is famous for building cars that don't fit into conventional moulds. The e-C4, for example, combines traditional five-door hatchback practicality with the style of a coupe SUV, to create an excellent entry-level family car.

​Then there's the Citroen C5 X plug-in hybrid. It's an interesting cocktail as it mixes shots of estate and saloon car with one part SUV, creating an interesting alternative to a Volkswagen Arteon Shooting Brake eHybrid or a BMW 330e.

Now Citroen is combining these two genre-bending, but nevertheless appealing, models to create the e-C4 X. Bosses are proudly calling it the first all-electric model to launch in the UK (although it launched first, the Ami, remember, technically isn't a car but a quadricycle) and one that fuses the 'elegant silhouette of a fastback with the modern look of an SUV'.

Styling is always a subjective thing, but we here at Electrifying feel the standard e-C4 hatchback is a good looking electric car, with enough Citroen quirkiness to feel different without being too odd. The e-C4 X takes the front half of the hatchback and adds a longer, lower roof and a large rear-end; it has the same wheelbase as the hatchback, but the extra length comes from that rather sizeable booted area.

That boot is accessed via a traditional door – in other words, the e-C4 X is a four-door car with a separate boot, and not a five-door car with a hatchback tailgate. That makes it rather unusual in the UK as Brits haven’t been fans of four-door saloons (other than premium executive cars like the BMW 3 Series) for a long time – it’s a very southern European, middle-Eastern and South American kind of thing. While Citroen has worked hard at integrating a large rump on the end and adding a more swoopy roofline, it’s a challenging looking car, we feel, and won’t be purchased because of its looks but rather the extra space that’s been created because of the body alterations.

Just like with the regular e-C4 hatchback, there’s a decent haul of technology that’s thrown in as standard. All cars get a large 10-inch touchscreen that’s relatively easy to navigate and operate, looks rather smart, and happily, important controls like the heating can be tweaked with large knobs underneath the screen rather than prodding around in sub-menus like in some Peugeot models that use a similar infotainment system. Wireless Apple CarPlay and Android Auto is standard equipment too.

Citroen also offers a smartphone app that gives the usual access to pre-conditioning and delayed charging.

Up front and the e-C4 X pinches the e-C4’s plush-feeling interior, complete with natty storage places and features such as a tablet holder in the dashboard. There are also a pair of tremendously comfortable front seats that feature extra foam padding for support; it’s a feature of many modern – and classic – Citroens and gives them a really lovely unique selling point for drivers who don't want a sporty feel the whole time.

It’s in the back where things start to change because while kneerom is exactly the same as the hatchback version, headroom feels a little more accommodating thanks to the rear seats being angled further backwards. Coupled with the extra comfy seats, and it’s a relaxing place to sit. Getting into the back seats, though, requires dipping your head more than the standard e-C4 because of that low roofline.

At 510 litres the boot is of a very generous size and even beats cars like the MG 5 estate car. The rear seats fold and split in a 60/40 fashion for even greater flexibility, but the elephant in the room is that the boot is accessed via a traditional saloon car’s boot lid. The lid itself doesn’t open terribly high meaning taller people will have to bend down to load items, and the aperture isn’t particularly tall either, although it is usefully wide.

It won’t come as a surprise to learn the e-C4 X uses the same battery and motor set-up as the e-C4 hatchback. That means a 134bhp electric motor powering the front wheels, giving a 0-62mph time of 9.5 seconds and a top speed of 93mph.

That acceleration time will be plenty fast enough for most people, but the e-C4 X is not one of many modern EVs that can sprint away from traffic lights with alarming speed. It’s moderately quick and is more interested in delivering a comfortable ride for its passengers.

The suspension features Citroen’s clever ‘progressive hydraulic cushions’ and, without wanting to bore you with a technical lecture, differs from the types of suspension you find in most other cars. Suffice it to say the ‘progressive hydraulic cushions’ do an excellent job at stopping potholes and bumps from spoiling the ride, and the e-C4 X wafts along in a style you’d expect from a very expensive limousine. It is a bit floppy in the corners, mind you, but the e-C4 X isn’t trying to be a sporty EV in the first place, especially with its rather numb steering.

There are few surprises under the skin as the e-C4 X uses the same mechanicals as the e-C4. So that means it has a 50kWh battery pack, 134bhp electric motor and the ability to charge at up to 100kW on a DC rapid charger, meaning a 0-80% rapid charge will take around 30 minutes. The e-C4 X can travel 222 miles with a full battery, Citroen claims – three more miles than the regular e-C4, probably on account of its more slippery shape. Realistically, though, that 222 miles will be more like 200 in everyday driving, and in colder months or on motorway runs around 180 would be likely.

However, time moves fast in the electric car world, and that 50kWh battery and 200-odd-mile range seemed rather impressive when the e-C4 launched in 2020, but now it seems pretty unremarkable. Citroen says the battery is of the right size for best efficiency and cost, but we’re a bit puzzled why Stellantis (the global car company behind Citroen) didn’t take the chance to slot in the new 54kWh battery pack that comes with the forthcoming Jeep Avenger which offers 250 miles.

The mid-spec Shine adds greater functionality to the infotainment system, 360-degree parking cameras, adaptive LED headlights, and a heated steering wheel. The Shine’s safety credentials are bolstered with night-time and cyclist detection, and Extended Traffic Sign Recognition. Shine Plus tops the range with its Alcantara upholstery and adaptive cruise control.

In many ways it’s refreshing to see a new car launched that isn’t an SUV. Citroen bosses have said they intend to pursue a future strategy of producing cars that straddle sectors and don’t fit into conventional forms, such as ‘small SUV’, ‘mid-sized SUV’, ‘estate car’ and so on. Citroen believes this strategy focuses on the needs of the customer rather than the manufacturer.

It’s a risky blueprint, though.The e-C4 and C5 X have been our first tastes of this new approach, and they have succeeded in being different from the norm but still offering plenty of appeal. The thing about the e-C4 X is that while it does have many of the standard hatchback’s very appealing driving characteristics and interior refinements, it’s essentially a high-riding electric saloon car and not quite the genre-bending car Citroen makes it out to be. If the boot had been a tailgate, it could have offered quite a lot to the UK buyer while also remaining relatively quirky.

The e-C4 X is primarily designed for markets other than the UK where booted saloon cars are still favoured by customers. While it is priced the same as the standard hatchback, a buyer would really have to crave a larger boot and rear seats that are reclined at a greater angle to opt for the X. We could see the e-C4 X being an ideal car for private hire companies or for drivers working for a certain ride-hailing company, but we guess it’ll be outsold by the more sensible e-C4 hatchback version.