Hummer has returned with a vehicle which is as outrageous as you'd expect. It's big in every way, and while the electric drivetrain may make it more acceptable, it's still driving to excess.

“I love a pick up and there is something appealing about the 'King of the Road' felling you'd get from the Hummer. But I'm not sure I could own one without feeling guilty - it's just to excessive in every way.”

“The fact that a car like the Hummer has gone electric might help convince the die-hards that EVs are the future. But I'd rather they'd used the resources to make four family cars instead.” 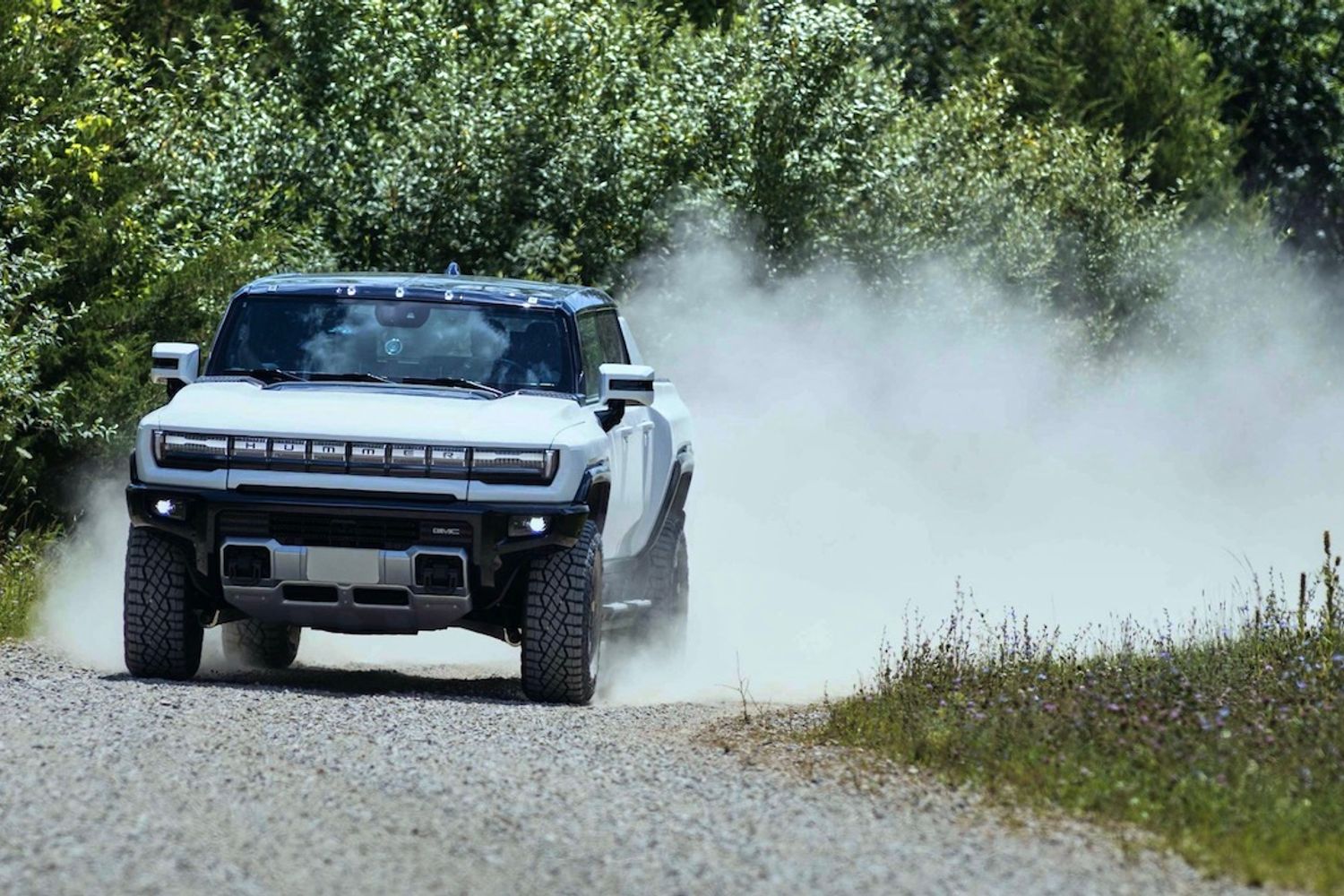 I'll be back – the phrase made famous by Arnold Schwarzenegger. And now the Terminator's favourite car is also celebrating a comeback too. After a break of a decade, General Motors is now staging a return for the controversial Hummer. The big, brash and politically incorrect supersize SUV is now more socially acceptable, as it has electric power.

Unlike the past, the company’s brand isn’t hanging onto its starring role in the Gulf War or music videos. Instead, it hopes buyers will consider it an alternative to the Rivian, the Ford F-150 Lightning, the soon-to-be-electrified Mercedes G-Class and at some point perhaps the Tesla Cyber Truck, if it actually becomes a reality.

Just as with the original Hummer, this is bigger and brasher than rivals. Although we expect the Hummer to be big, it is still a shock to see it in the metal. It’s more than two metres wide and six metres in length. For comparison, a new Range Rover is just over five metres long.

And when it comes to design, GM does not even dare to modernise the instantly-recognisable shape and just screws an LED strip with HUMMER lettering into the wide plastic grille as the only tribute to the new era.

But underneath the familiar-looking metal is something altogether different to the monster petrol and diesel engines of old. And while they don’t burn fuel, they are still of monster proportions.

The Edition 1 we tried has two electric motors, one front and one in the rear with together almost exactly 1,000bhp and more than 1,600 Nm of torque. Later there will be an 830bhp tri-engine version and then with a 625bhp twin-engine version costing around £80,000.

But in order to provide this powerhouse with the necessary juice, they have packed two battery packs in, stacked like the burgers on a Big Mac. Together, they add up more than 210 kWh, which weighs 900kg alone. It’s easily the biggest pack fitted to any car and around four times the size of the battery fitted in a car like the Volkswagen ID.3.

But the Hummer also needs those big batteries. Because even with a full charge, there is not much more than 310 miles of range in it. And to ensure that the large battery does not have to charge for days on end to get full, there is 350 kW charging capacity. It means you can add 100 miles in 10 minutes if you can find a powerful enough station.

But such powerful fast chargers are rare in the USA, especially in the wilderness. This is one of the reasons why GM has developed a mobile fuel cell that you can pull into the camp together with a few bottles of hydrogen on the trailer and recharge your Hummer with up to 90 kWh of charge while you fire up the barbecue.

With the charging done, we can talk about driving. To be honest, it's soon apparent that the Hummer is a bit silly. If you are on a Tarmac, you can activate the ‘WTF’ operation (yes, really) for maximum thrills in. straight line. According to GM’s marketing wags the abbreviation stands for Watts to Freedom and is GM’s response to Tesla’s Ludicrous mode. Hammer your foot on the accelerator pedal, and you almost can’t trust your senses. It’s like a wild rhinoceros has been stung by a hornet, and the Hummer throws its three tons forward with such power that the occupants feel as if they had been struck by lightning. The 0 to 62 sprint takes three seconds - which would be impressive even in a sports car.

But the pick-up, which will later be followed by an SUV with a closed back just like Rivian, is not made for the drag strip. It’s most at home in the dirt with over 400mm of ground clearance and 800mm of wading depth. Inclines are dismissed as if they don’t exist and mud barely slows the tractor-like tyres on their 24-inch rims. Where the giant's size could be a hindrance, it has all-wheel steering to help. It can turn around in a space smaller than a Tesla Model 3 as a result.

The driver follows all this on two huge screens coupled with half a dozen cameras. GM has even developed its own special washers for them, so that you don’t lose sight in the dirt. Of course, there are digital instruments, a touchscreen larger than a laptop and the most modern infotainment too.

And what about us Europeans? Officially, there are no export plans for the electric Hummer (yet). But just like Rivian with the R1T or Ford with the F-150 Lightning, electric powertrains naturally open doors that were otherwise closed by emissions restrictions.

The taxes and restrictions don’t (yet) take account of the resources used and emissions created when the car is built or while you are driving it – which is just as well for the Hummer. But even though the Hummer is far from being the most eco-friendly car, a dinosaur like this is better powered by electricity than a petrol or diesel.

But there are other restrictions you need to think of before you send your order in for a specially imported Hummer. Unless you have the right licence, you won't be able to drive one in the UK as it is too long and too heavy. Even if you take the special test (or are old enough to have entitlement) then it won't be allowed over some bridges or roads due to the weight.

Which means the Hummer is an interesting car, for sure. But, despite its reinvention as an all-electric vehicle, it doesn't seem to sit right in a world where excess is something we don't want to see revived from the 1990s.