One of the UK's most popular electric cars gets a new look, more space and tech. The figures don't look like much of an improvement, but it's better where it matters.

“I'll admit I wasn't hugely impressed when I first saw this car and some figures are a little off the pace still. But Kia has improved in most of the places that matter and created a really impressive package. ”

“Like Ginny, I was disappointed when I looked down the spec sheet, but after spending some time on the road I think the reborn Niro EV is a car which will just slot perfectly into the lives of many families. ” 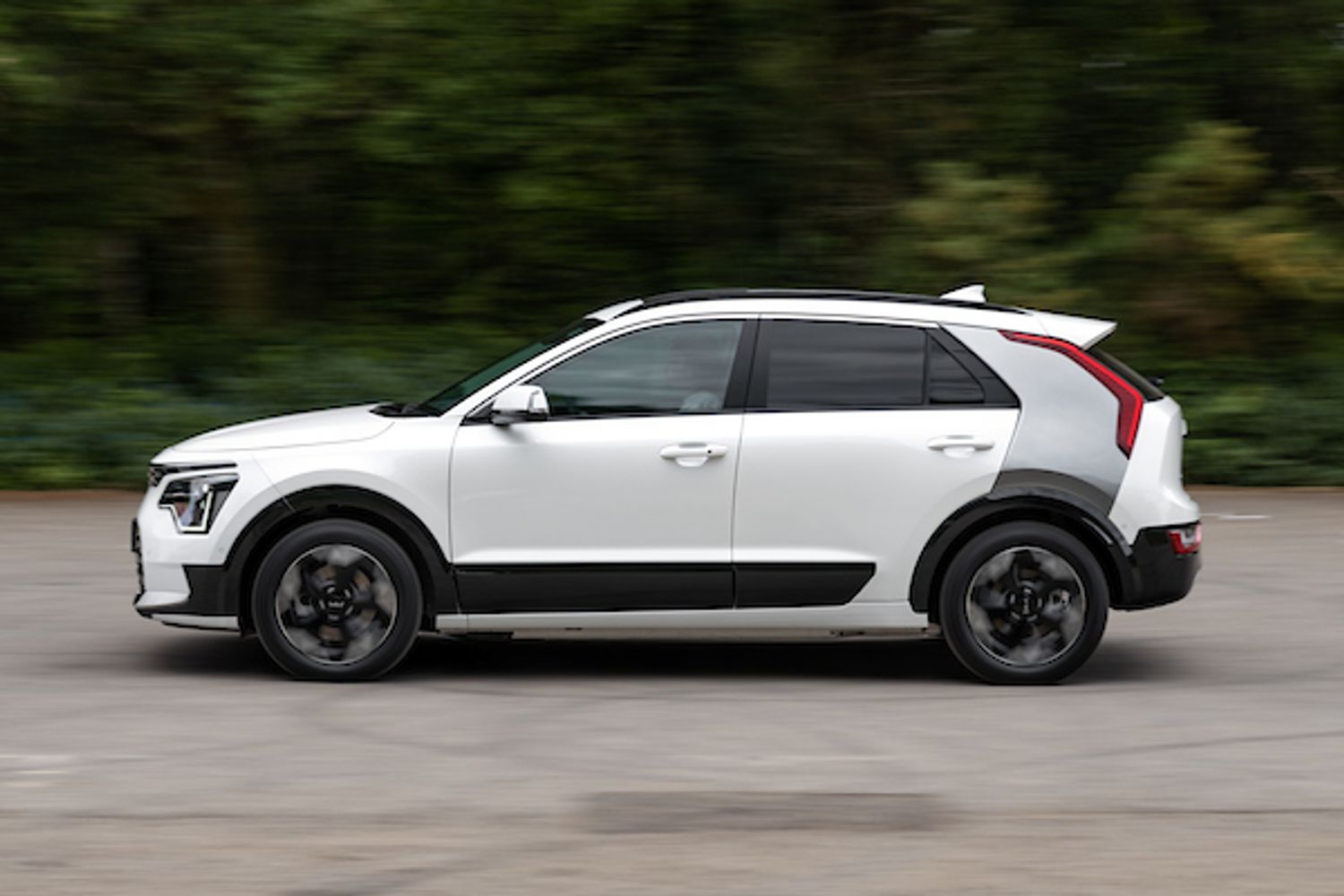 The Tesla Model 3 may grab the sales headlines every few months, but the UK’s second best-selling electric car is this, the Kia Niro EV. In fact, the Korean SUV has been a huge seller for Kia since its launch and has a devoted following in the UK. Fabled for its efficiency and loved for its affordable price, the Niro remains one of the best all-rounders you can buy.

And now, nearly four years after the original arrived, Kia is about to introduce a new version. Out goes the eNiro nameplate and in comes the Niro EV badge, along with a host of detail and engineering updates, the biggest of which is a new set of underpinnings. The new Niro is now built on what Kia calls it’s K platform, which sits underneath a host of Kia and Hyundai products.

This means that the Niro is more than a facelift. It might look like a reboot of the old car, but its actually substantially different. The bodyshell is actually longer for a start.

In terms of looks, the Niro EV reflects Kia’s growing confidence and reputation for bold styling. The front end features an evolution of what Kia calls its ‘tiger face’ and makes quite a statement with its unusually-shaped headlight clusters and shallow light strip that runs the full width of the car. The off-set charging flap of the eNiro has been replaced by a new centrally-mounted port while the new clamshell bonnet features Kia’s new logo for the first time.

The big talking, point, however, is at the back, where Kia has introduced a contrast panel that runs from the roofline to the back wheelarch. It’s the kind of feature that you either love or loathe and while we’re huge fans of brands who deliver bold designs, it's something that takes a little getting used to.

Inside, Kia has done a decent job in making the Niro a more rewarding place to spend time. Much as we love the outgoing model, the cabin was always something of a let-down, both in terms of layout and quality. The new dashboard takes some styling cues from the larger Sorento and Sportage models and feature a a long, sloping dashboard rail that houses both a digital instrument binnacle and an infotainment screen, both of which are 10.25” displays. As with the EV6, there’s a sensible combination of physical buttons and touchscreen controls and anyone switching from a traditional ICE car won’t be overwhelmed by the familiar layout. Kia is also introducing some new materials such as a headlining made from recycled wallpaper and door trims made from a solvent free plastics.

The switch to a new body has bought a decent increase in interior space too. This is most noticeable in the rear where six-footers will appreciate the improvement in legroom. Kia points out that in addition the new car’s longer wheelbase, the front seats are now thinner to allow for more knee space in the back.

In terms of practicality, the Niro electric offers an impressive 475 litres of space (up 24 litres) in the boot, which isn't that much smaller than an EV6's 490-litres. For the first time, there's a frunk too. Although it can only hold 20 litres, that’s enough for a well wound Type 2 cable and means that your filthy wet plugs don’t have to be stowed with the rest of your luggage in the back.

Customers can also specify a special ‘relaxation’ seat that reclines fully and allows you to catch forty winks during a charging break.

Downsides? Well, the smaller screens in the cheaper models look a little lost and the fake leather is particularly fake. While we don’t doubt its longevity, it doesn’t deliver the premium feel of its EV6 stablemate.

While much of the Niro’s design and styling features are new, the same can’t be said for its battery and charging set-up. The Niro Electric has a fractionally larger battery pack at 64.8kWh (0.8kWh bigger than the old model) and, bizarrely, a slightly slower rapid charge system. Where the eNiro was capable of DC charging at a maximum speed of 77kW, the new version maxes out at 72kW. While this seems something of a backward step – especially at a time when 100kW DC charging is considered the bare minimum –  Kia says that its new electronics allow the Niro to charge at a higher speed for longer. As a result, a 10-80% charge will take around nine minutes less at around 43 minutes.

We've yet to plug one in to test it, but Kia and Hyundai models to tend to charge at higher speeds than rivals over a longer period. The Niro will also precondition the battery so it's at the optimum temperature to accept charge if you enter the charging station into the car's sat nav.

As for range, this has also improved, albeit slightly. Kia claims a WLTP figure of 287 miles, which represents a five mile increase on the previous model. However, given the eNiro’s reputation for eke-ing out every last drop of energy from the battery, we’d expect that to translate to a solid 240-250 miles of real world range.

And if you’re wondering where the 39kWh version is, the bad news is that Kia has yet to make its mind up on whether to introduce it. Demand for the 64kWh model is considerably higher than for the 39kWh, and with the market shifting towards larger packs with longer ranges, the smaller model may well have run its course.

The new Niro does feel like it’s evolved once you start moving. It just feels like it’s just grown up a bit. It may have the same 201bhp motor as the old car - which always felt a tiny bit jerky and aggressive for a five-seat crossover - but the new one has been softened off to make it smoother and more friendly.

When you press the throttle, the Niro EV doesn’t jump forward and scrabble its front wheels like the previous version. As a result, the 0-62mph time goes up from 7.5 seconds to 7.8 seconds, but that is still more than adequate for a family car and you'll spend less time at Kwik Fit buying tyres.

There are three drive modes (Sport, Normal and Eco), and the Niro still has Kia’s paddle-operated regenerative braking accessed via paddles behind the wheel. This seems smoother and stronger than before, helping to recapture energy which would otherwise be wasted.

The Niro is also quieter, and with more supple suspension. It’s not perfect - it still thumps slightly over smaller bumps - but the faster you go, the better it gets. The steering also feels good - you can place the car really easily.

And the handling is safe and secure, with decent control of the body, so it doesn’t flop about all over the place. It feels calm and secure. This isn’t night and day over the old version, but the edges have been smoothed out, like the car has been to finishing school and ended up with better manners and posture.

The Niro Electric also offers buyers the opportunity to add a tow bar for the first time. Although it comes with a modest 750kg limit, it will appeal to owners who tow smaller trailers or who want a mounting point for a large cycle rack.

There are two new acronyms to get to grips with if you’re planning to become a Niro Electric buyer: RSPA and V2L. RSPA is Remote Smart Parking Assist. It means you can drive the car forwards or back when you are outside by using the key as a remote control. Handy if someone parks too close to you and wedges you in.  V2L is Vehicle to Load as we’ve already seen in the EV6 and means you can power external electrical appliances using the battery power. Handy if you need to dry your hair while camping or make coffee in a car park.

All are available in a choice of eight colours, with premium paint options charged at £595. Top-spec ‘4’ models come with an optional two-tone paint option for £150 when combined with the standard paint, or £745 when combined with premium paint option. This allows customers to specify the C-pillar in contrasting Steel Grey or Black Pearl, depending on the chosen body colour. The Niro EV ‘4’ is also available with an exclusive lighter grey interior, Steel Grey body cladding, and White Pearl paint for £745 over the £41,745 base price.

Whatever you think to the more sci-fi styling, you can’t get away from the fact that pretty much everything else Kia has done to revise the Niro has made it a more functional, desirable and useful car. On paper, it might look like it’s gone backwards, but it really hasn’t. Add to that a big seven-year warranty package and it’s looking decidedly rosy. The name might have changed, but the Kia Niro EV remains an Electrifying favourite.

FAQs »
Own a Kia Niro EV or looking to buy? Tell us about your experience