This SUV version of the EQS, has all the luxury of the saloon in an SUV package. It sits firmly at the top of the range of electric vehicles produced by Mercedes, but is less efficient than the saloon.

“If the EQS saloon is anything to go by, Mercedes will have a superb luxury SUV added to its growing electric range. Whether it is better than the BMW iX remains to be seen though, especially considering its more expensive price tag. Would it tempt you out of a Range Rover?”

“Not the smallest of cars at 5.2 metres long, the EQS SUV should offer luxury motivation for up to seven of your closest friends. Expect the same tech as the saloon, with AMG stuff following later. Posh competition for the BMW iX. ” 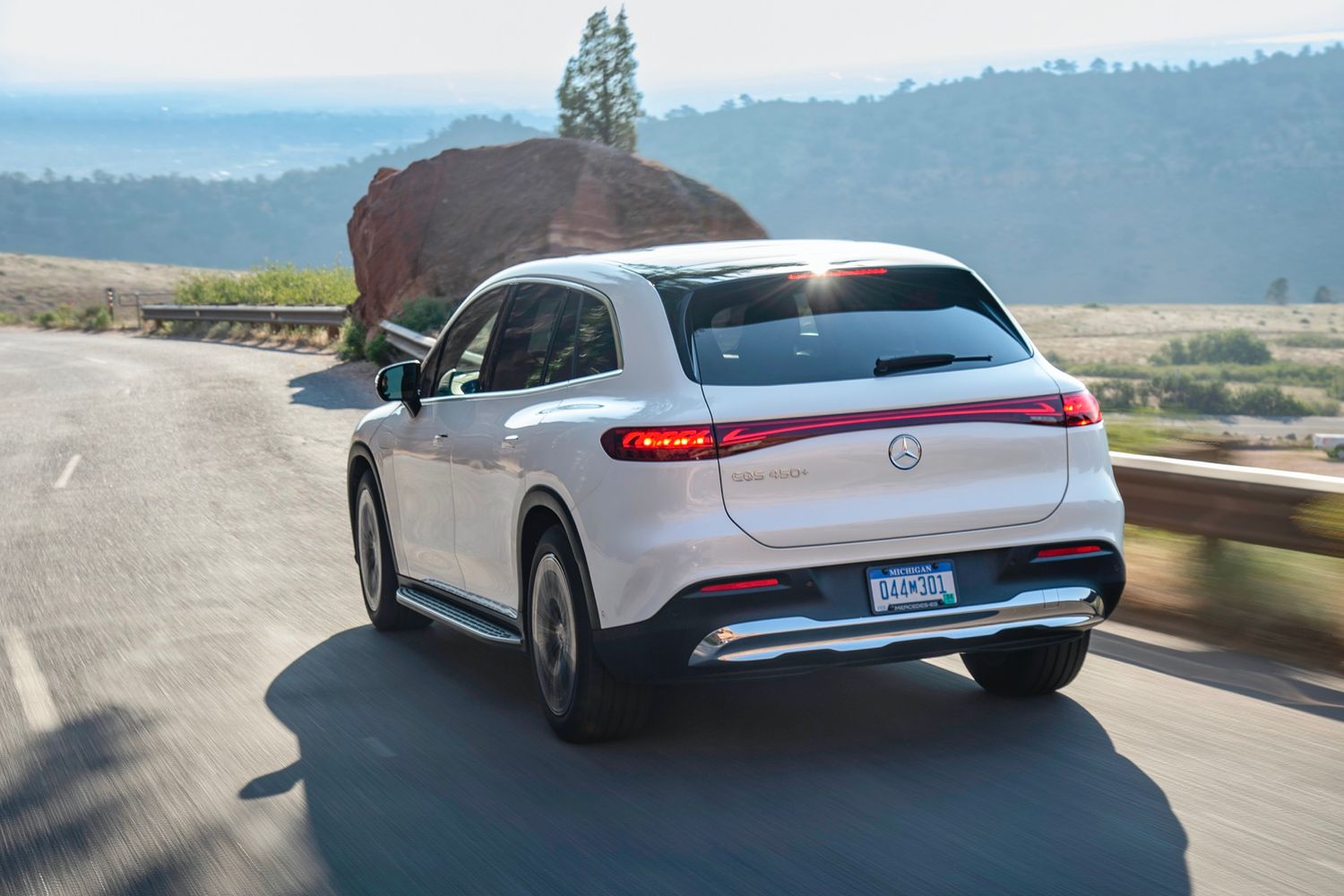 Mercedes is steamrollering its way to the top of the electric car market with a wide range of pure-battery powered models which aim to reinvent the super-luxury car. The latest - the SUV version of the EQS - sits at the top of range as the largest and most expensive electric Merc.

The EQS SUV becomes the third model following the EQS and EQE saloons to use Mercedes' new bespoke electric car hardware. It was officially revealed in April 2021 before going on sale in the UK by the end of the year. As it rivals the BMW iX, expect prices to be around the £110,000 mark.

It shares a lot of its design, naturally, with the EQS and EQE saloons with a smooth, curvy look, blanked-off grille and full-width front and rear LED lights. But unlike its saloon sisters, the SUV has a more traditional, high-riding styling that's more in keeping with Merc's other petrol and diesel SUV models. It certainly has the size and weight of other Mercedes SUVs as the EQS SUV stretches to over five metres and weighs nearly three tonnes.

Naturally, being an SUV, it sits 20cm higher off the road than the EQS and is easier to get into thanks to seats that sit eight centimetres higher. It can be jacked up even further with the standard air suspension and actually offers an off-road program. However, despite this, Mercedes isn't targeting outright mud-wrestling prowess with the EQS as that will be the role of the electric G-Glass - the EQG - which arrives in 2024.

Whether on or off road, there is also steering on the rear wheels to help you negotiate tight bends. It gives up to ten degrees of impact angle, shrinking the turning circle by almost one metre. It works wonders: in the city, you can master narrow parking spaces, the ramp in the underground car park becomes child's play and even narrow driveways no longer frighten you.

However, it's the space inside which really impresses with tonnes of rear leg and headroom giving a more limo-like experience than even the EQS manages. There's a degree of practicality too as the rear bench seat can slide forwards and backwards to prioritise legroom or boot space. Speaking of the boot, there are also two extra seats making the EQS a seven-seat SUV. Even teenagers can even sit in the back row comfortably, making the EQS SUV an elegant alternative to the somewhat sober and even larger EQV, or the smaller EQB, which can't comfortably seat anyone who has graduated from nursery school.

Elsewhere, the SUV pinches a lot of the EQS's luxurious interior. The famed 'Hyperscreen' (a £7,995 optional screen on the EQS which stretches across the entire dashboard) is carried over and can be specified, although for the SUV it's been slightly remodelled to allow the passenger to watch TV or movies. There's still the same impressive build quality as found on the EQS saloon with plenty of soft leathers, plush plastics and real metal and wood inlays used.

There's the same electric technology under the SUV's larger body, too, which means a 107.8kWh battery powering single and twin electric motors. When it comes to the line up, the range begins like in the sedan with the EQS 450+. Although it only has an engine with 360 hp in the rear and drives – unusually for an SUV in this class – without all-wheel drive, but can travel up to 380 miles on one charge. If you order the 450 as a 4Matic, you also drive with 360 hp, which, however, is distributed over two motors and thus two axles – and then in the best case you will get 319 miles. The flagship at launch will be the EQS 580 with 544 hp, mandatory all-wheel drive and also up to 319 miles of range.

That's a fair chunk less that the EQS saloon as a result of the extra weight and the less aerodynamic shape. There will be cheaper and more expensive models too, with Mercedes' AMG tuning division producing its own performance-minded EQS SUV, and already confirmed, a super-posh Mercedes-Maybach version is arriving in 2023.

Whichever model you are driving in, the electric drive fits well with this super refined cruiser. Despite its 2,810kg weight, the SUV accelerates completely effortlessly in 4.6 seconds to 62mph and is exceptionally refined at the same time. Occupants float over the motorway, and it is so smooth it sometimes feels like the moving scenery outside is just a movie.

So you do not lose any time at the charge station, the EQS charges in the best case at 210 kW, so that an 80 percent charge can be reached after 31 minutes. It also has Mercedes' answer to the ease of Tesla charging. Called Plug&Charge, it means authentication on the network's cable happens automatically and the power flows even without a code or card as soon as the cable is plugged into the socket.

When it arrives in the UK at the end of 2022, the EQS will without question be Mercedes' largest and finest electric SUV to date, thanks to its bespoke EV platform and impressive design and tech shared with the EQS saloon. It'll certainly appeal to the same types of people who buy Mercedes' current range-topping SUV, the GLS, with its impressive size and it being a very obvious statement of wealth.

Whether the world really needs a huge SUV which could supply three smaller electric cars with batteries is a subject for debate - but the EQS SUV is good enough to persuade anyone out of a V8.