Mercedes’ first proper crack at building a clean-sheet electric car is as impressive as you'd expect. It's not an electric S-Class though, as it is much more sporty than you might expect.

“There's no doubt that the EQS is going to really push forward the electric car benchmark in terms of range, refinement and technology. It's a surprise that it doesn't try to challenge Tesla or Audi in terms of performance though.”

“I love the way the familiar Mercedes EQC drives as it's just so quiet and relaxing. The EQS takes this to another level, not least because the slippery shape slips through the air better than any other car on sale. That makes it quieter and more efficient too.” 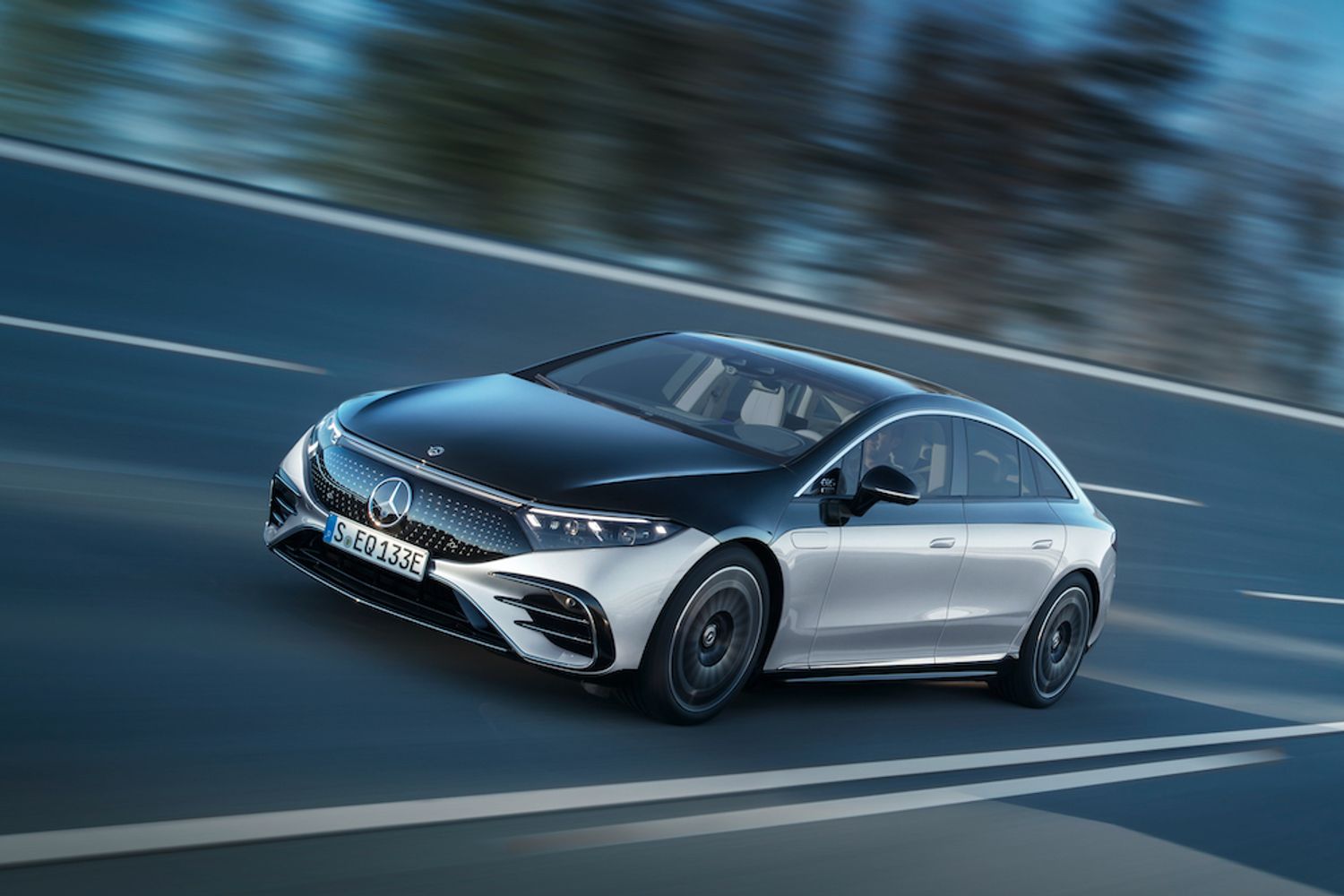 The EQS is as impressive as you might expect a £100,000 Mercedes to be. But it's not the electric S-Class we expected, as it is more of a sporty saloon than a super-refined limo.

The EQS is Mercedes' first all-out attempt at an electric car. For the first time Mercedes is using a structure which is specially developed to be pure electric rather than converting a petrol car. Not only is it flexible enough to allow numerous different configurations and be scalable to have different bodies placed on it (a smaller saloon and two SUVs are planned), but the platform’s clever packaging means it offers fantastic interior space.

Measuring 5.21 metres in length the EQS is as long as the range-topping S-Class limo. But the EQS's 3.21-metre wheelbase (the area between the wheels when looking at the side of the car) is on par with the S-Class long-wheelbase, which means back seat passengers can really stretch out. And because the tailgate extends into the roof, the boot can be expanded like an SUV. With a capacity of almost 1,800 litres, the big electric Merc has more space than most estate cars, so can even be used as an Ikea shopping trolley.

Mercedes really has thrown everything it has at the EQS. It gets a massive 107.8kWh battery which means an official WLTP range of 478 miles – that's almost 62 miles more than a Tesla Model S and a new world record. There are two versions; the EQS 450 gets a 329bhp rear-mounted electric motor and the EQS 580 packs two motors, one on each axle, and 516bhp, which is more than an S-Class with a V8 petrol engine.

Only the 450 is available in the Uk cureently with a price tag starting at £99,995, but a smaller battery model will also be launched later and a performance-minded Mercedes-AMG version is expected too.

Mercedes doesn't want to score points with the hardware alone, though. Software and tech are two big features of the EQS and this is most obvious with the car's 'hyperscreen'. Mercedes calls it a 'continuous surface made of aluminium silicate glass', but to you and I it's a large infotainment screen that extends practically across the entire dashboard. It screen is curved at 650-degrees and measures a staggering 1.41 metres, making a Tesla Model S's screen look pretty tiny. It costs a very hefty £7,995. Some of the gadgets which make it special - such as the ability for your passengers to watch movies - are disabled for the British market, which makes it less interesting. You also have to physically lean forward and stretch to tap some on-screen buttons too.

While the interior is radical, the way the EQS drives is a surprise too. We'd been expecting - maybe even hoping - that this would be an electric car with all the refinement of the S-Class. But after a few miles it's clear that the EQS he more sporting ideas. The steering is so sharp and the ride firm that it almost feels like an overgrown MINI. Combined with the almost spontaneous acceleration, we assumed at first that we had mistakenly selected some Sport mode - but this is how the EQS behaves in it's 'Comfort' setting.

The EQS does impress which its silence though  Once you have deactivated the artificial spaceship sound or the imitated V8 rumble, you travel in absolute silence. Due to the wind finding so little resistance from the car's slippery body shape, you will almost hear the digital clock ticking rather than nasty wind noises. Only the occasional thump from the 21-inch tyres interrupts.

Mercedes wants to make life easy for the driver so it has fitted the EQS with an intelligent recuperation programme that cleverly educates the driver how to drive without touching the brake pedal. Thanks to some clever sensors as part of the automatic distance control and the electric motors, the traditional mechanic brake is largely superfluous as the EQS can measure and predict when it will need to slow down and can brake automatically. And while the EQS feels like a huge car for the occupants, it feels small for the driver. Just like the new S-Class, the EQS gets rear-wheel steering which can turn the wheels by up to 10-degrees to help with manoeuvring. It means the EQS can slip through city traffic effortlessly and slots into parking spaces easily. It makes a real difference in everyday use and might be out favourite part of the car.

With an interpretation of luxury that is more trendy than traditional, and it having the largest battery on sale, the longest range and the biggest infotainment screen, there's a sense the EQS is a new guiding star for the electric car market. But we do worry where it fits in the market. There's a decent selection of pure-electric sports saloons, including the Porshe Taycan and Tesla Model S. But none of them are refined and smooth riding. This seemed a natural place for the EQS to slot in, but instead it's gone sporty too. That seems like a missed opportunity.

FAQs »
Own a Mercedes EQS or looking to buy? Tell us about your experience