SKODA's first all-electric performance model sets out to combine a sporty driving experience with the brand's famous value for money. Does it succeed?

“I’ve always have a soft spot for fast ŠKODAs and I’m a huge fan of the Enyaq, so this is the perfect combination. I’ll admit, the price comes as a shock at first, but when you compare it to the mechanically-identical Volkswagen ID.5 GTX, it starts to look pretty good value.”

“Okay, I’m not a huge fan of the green, but I do love the look of the vRS. I’m a sucker for a fast car and I reckon this will have huge appeal for drivers who want something exciting but still need to carry the kids and all their stuff. I’m really looking forward to seeing the vRS on UK roads soon. ” 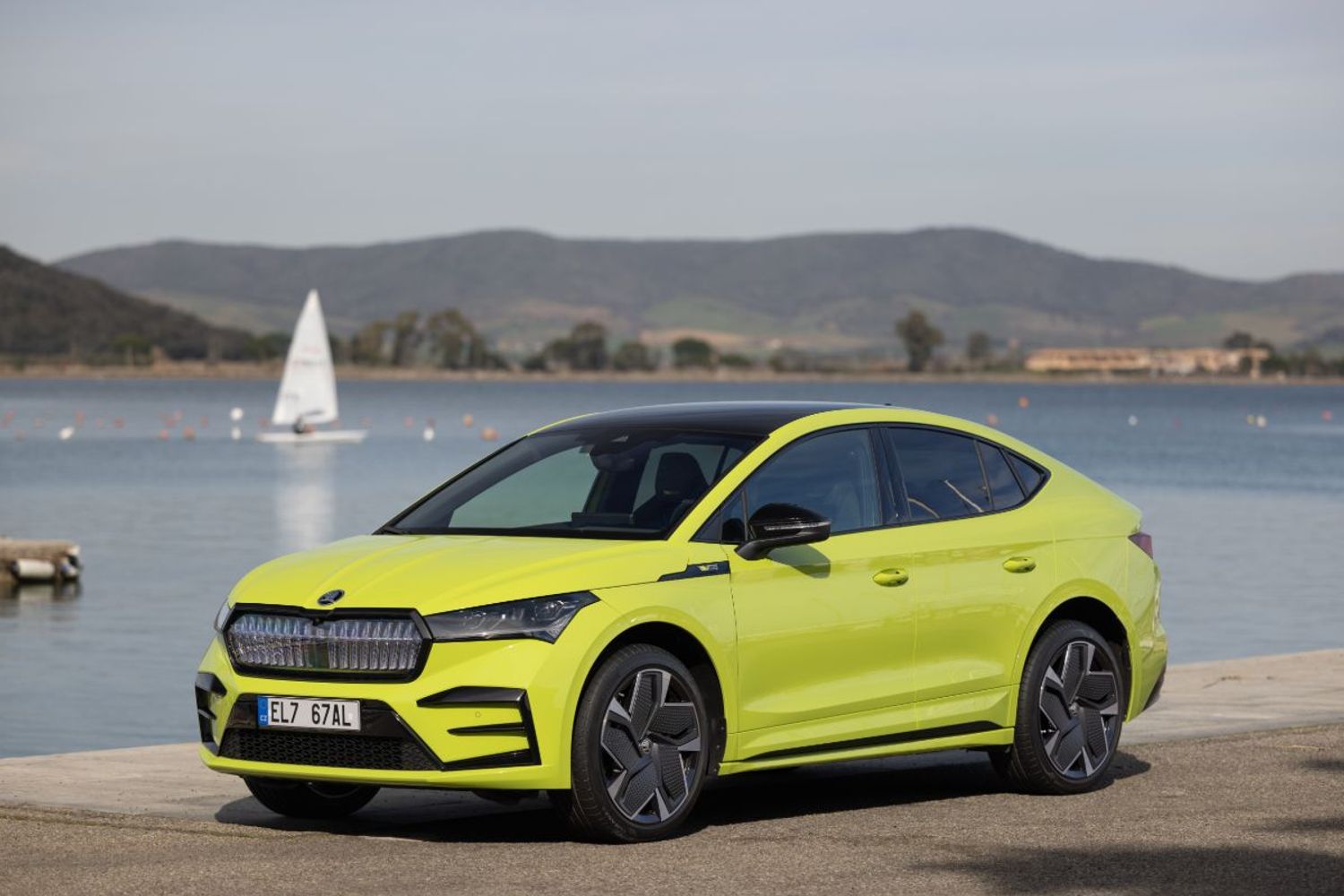 The SKODA Enyaq has been a huge hit for the brand since its arrival in 2021. Striking the perfect balance between size, practicality and value, it’s been one of the most searched-for cars at Electrifying.com since its arrival. The only problem it seems is the SKODA is struggling to meet the overwhelming demand both from UK customers and around Europe.

But while the standard Enyaq launched into the ‘Goldilocks’ zone of the electric car market, delivering the perfect spec (big batteries and range) at the perfect price (sub £40k), ŠKODA is about to fiddle with its magic formula with a new range-topping vRS model. At £51,885, the Enyaq vRS is the most expensive production SKODA to date.

For newcomers to the SKODA range, the vRS badge has been the Czech brand’s performance car nameplate since the mid 1970s. First glued to SKODA’s giant-killing rally cars, the badge has latterly been applied to more everyday cars such as the Fabia, Octavia and Kodiaq SUV.

Now, ŠKODA is about to give the Enyaq the vRS treatment – creating the brand’s first, fully electric sporting flagship model in the process. The newcomer takes the form of the newly revealed Enyaq Coupe - a sleeker, sportier and more aerodynamically efficient variant of the Enyaq SUV that launched last year. The vRS will be the first coupe model to the UK market and will be followed by standard models a few months later.

The Enyaq vRS features the same size 77kWh battery pack as the standard SUV model. The larger of the two Enyaq packs will be the only one available in the Coupe range from launch with those wanting the smaller (and cheaper) 58kWh pack limited to the standard SUV variant.

Like the standard model, the vRS can accept a DC rapid charge at 135kW, which is reasonable rather than spectacular - especially when compared to the likes of the Hyundai IONIQ 5 and Kia EV6, both of which can recharge at 220kW on a suitable charger. That said, the Enyaq will still be able to charge to 80% in around 36 minutes on a 150kW charger, which will be more than fast enough for most. Curiously, while the vRS and the standard coupe model both have 77kWh packs, they come from different suppliers. The vRS pack, which is supplied by CATL, has different chemistry and a subtly different charging curve as a result. This means that although it takes seven minutes longer to charge on a rapid charger, it initially charges quicker (up to 175kW peak according to SKODA) than the non-vRS battery supplied by LG.

In terms of range, ŠKODA claims an official WLTP figure of 312 miles for the vRS model. During our limited time with the car, we drove it on a mixed route of mainly fast A-roads and dual carriageways and averaged 2.6 miles per kWh consumption. Had we driven in the same fashion and on the same kinds of roads, the vRS would have delivered a real-world range of just over 200. Had we opted for a more restrained driving style and chosen Eco or Comfort driving modes, we’d be confident of adding at least 30 or 40 miles to that figure. By comparison, the standard rear-drive Enyaq 80 Coupe we drove back-to-back with the vRS on the same roads returned miles per 3.3kWh (and a potential range of around 250 miles).

The Enyaq Coupe vRS deliver 294bhp to the road via twin motors - one on either axle. The rear motor is the same as fitted to the standard Enyaq, albeit with different management software to deliver sportier responses, while the front motor adds an additional 93bhp to bring the total up to 294bhp. Combined torque output for both motors is 460Nm.

On the road, the vRS feels noticeably quicker than the standard Enyaq. Although the official 0-62mph time of 6.5 seconds isn’t going to impress buyers who might also be considering a Tesla Model 3 or Y, or even a Kia EV6 or Hyundai IONIQ 5, it feels much more lively than the figures suggest. The high torque figure gives the Enyaq some serious punch and while it’s not the quickest off the line, the mid-range power delivery put its up there with the best in the sector for overtaking ability and driver engagement. With Sport mode engaged – which sharpens throttle response among other things – the vRS leaps forward with the gentlest of nudges on the accelerator.

And there’s good news for those who like to combine a sporty drive with taking some grass cuttings to the tip. The vRS is permitted to tow a braked trailer weighing up to 1,400 kg on gradients of up to 8%.

The vRS model comes with sports front and rear bumpers and gloss black surrounds for the grille, window trim and rear diffuser. Badges, tailgate lettering and the air curtain trim on the front apron are also finished in black, while the rear bumper adds a full-length red reflector – a design feature shared with all other SKODA vRS models. And, like all Coupé models, the vRS is fitted with a full-length panoramic glass roof as standard.

In the metal, the Coupe has impressive kerb appeal and looks great from every angle. The swooping roofline, which helps give the Coupe an exceptionally low drag co-efficient,  is elegant and somehow manages to blend neatly with the chunky front end.

Inside, the vRS features what SKODA describes as a model-specific ‘Design Selection’ reserved for the sporting flagship of the range. In addition to black perforated leather sports seats (heated) with integrated headrests, grey piping and contrast stitching, the vRS features a leather multifunction sports steering wheel complete with vRS badge.

For the European market, ŠKODA offers the vRS with a much more exciting Alcantara interior with green piping and stitching, but sadly the UK will only get the black leather interior. Boo.

Space inside is excellent and, in terms of headroom, identical to that of the SUV version. What's more, the full-length panoramic roof gives a lovely feeling of airiness along with an uninterrupted view of the sky. Thankfully, the Coupe’s swoopier roofline has done little to affect the Enyaq’s practicality – a feature that has made the SUV a hit with family buyers. The Coupe’s boot (accessed via a standard powered tailgate) can hold a whopping 570 litres of luggage (just 15 litres less than the SUV version), which puts it ahead of almost all its sector rivals.

To give the Enyaq vRS a sportier driving experience, it comes fitted with a sports chassis that is 15mm lower at the front and 10mm at the rear. Dynamic steering that alters the ratio according to the amount of lock you wind on is also standard.

The vRS also comes with ŠKODA’s clever Dynamic Chassis Control (DCC) system as an option that continuously assesses the driving situation and adjusts damping and steering accordingly. The basic settings – Eco, Comfort, Normal and Sport – can be chosen in Driving Mode Select, while in the Individual mode, these can be fine-tuned using a slider. The vRS also comes with an additional option, Traction mode, which is intended for driving on gravel tracks and gravel or slippery surfaces and provides constant all-wheel drive at speeds of up to 12 mph.

On the road, the vRS certainly feels a quick car, but you can never disguise the fact that you’re sitting inside a big and heavy car. ŠKODA’s engineers have done a great job in balancing ride comfort with agility, but sudden dips in the road and mid-corner bumps can upset the balance temporarily. The Enyaq also suffers from the same overactive lane assist system that seems to blight every new car. Although it can be disabled via a Systems menu and a newly introduced shortcut button on the main screen, it switches back on whenever you restart the car. While we’re all for improving safety at Electrifying.com, but the constant artificial pulling of the steering wheel when the system finds then loses a white line on the road is off-putting and unnecessarily distracting.

On the positive side, the brakes are powerful and have a solid feel, while the regeneration in B mode does a decent job of sending energy back to the battery pack. It’s just a shame that B mode exists at all - we’d prefer to see it as part of the standard drive set-up.

The Enyaq Coupe vRS comes with a decent spec sheet – as you’d expect for a car with list price north of £50,000. Among the standard items are a 13-inch infotainment system with inbuilt navigation. A rear-view camera, tri-zone climate control and heated seats and steering wheel are also included as part of the vRS package. Customers can also spec the wonderful Hyper Green at no extra cost. Disappointingly, a heat pump – which can make a significant distance to range in cold weather – is still stubbornly on the option list with a hefty £1,025 price tag.

The infotainment system, that even SKODA admits had room for improvement when it first appeared, has been given its biggest update to date. The third-generation operating system certainly seems slicker and quicker, and introduces a host of new features. These include things you can see such as improved and more informative screen graphics and more responsive controls to those you can't such as new battery management and heating systems. The latter have been updated to improve the performance and charging capability of the battery pack and should deliver range improvements, especially in cold weather.

The new operating system is also backwards compatible, which means that all Enyaq owners will be able to benefit from the updates.