We’ve been charmed by the Mii. It’s an honest, well-made and surprisingly fun package that covers all the basics and delivers a longer range than you'd expect. Factor in the £20k price tag and it’s going to make financial sense for a lots of drivers who might have thought they couldn't go electric.

“The baby SEAT is a fantastic small EV that does everything well. The range is brilliant for an urban car, the cabin is unfussy and it’s fun to drive. Factor in that sub-£20k price tag and the financial sums will add up for thousands of people.”

“Whether you opt for a VW, SEAT or ŠKODA badge, this small Volkswagen Group EV is a great introduction to the world of electric motoring. The price makes a lot of supermini EVs look needlessly expensive and I love the back-to-basics feel of the interior.” 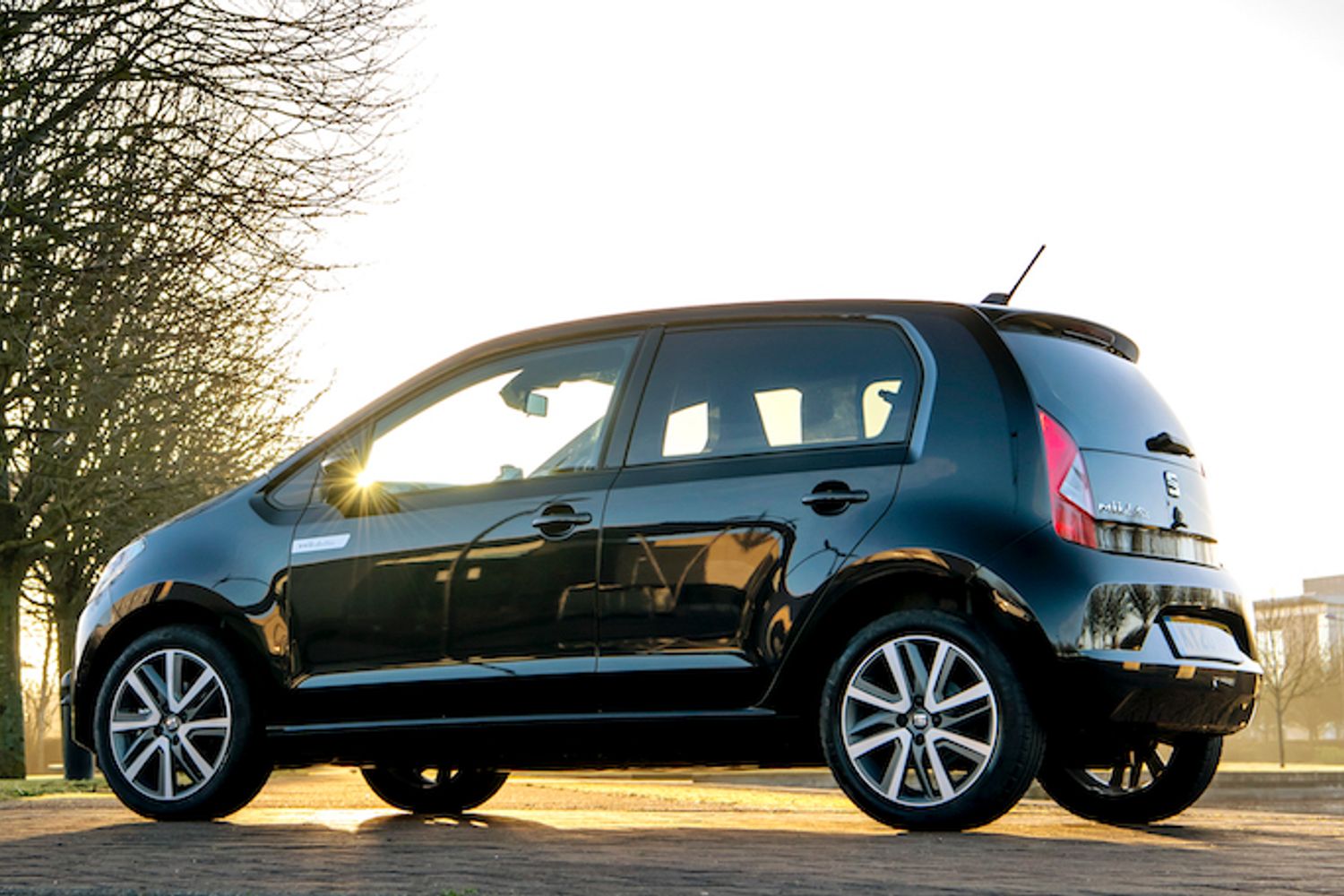 The Mii is pretty new and a bit of a rarity, so there are very few about used except ex-demonstrator cars from dealers.

The Seat Mii, along with its Skoda Citigo and Volkswagen Up! siblings, proved to be one of the best city cars of recent times. Showing that a small car didn’t have to mean sacrificing majorly on space or driving dynamics, it remains an impressive choics even nearly a decade after first arriving on sale.

But though a petrol Mii might have been on sale since 2012, it wasn’t actually until 2020 that Seat thought to power its dinky city car with electricity. Unlike the Up!, from this point onwards the Mii was sold purely as an EV, with attractive prices and no compromise on interior space making it one of the most affordable electric cars on the market, with a sub-£20,000 price once the government grant had been deducted.

With Seat UK having minimal supply, there aren’t all that Mii Electrics on the road, while Seat has already stopped taking orders for new versions – the Spanish firm never planned to sell it beyond 2021. But the used examples available do represent great value. Here’s what you need to know about the Seat Mii Electric.

With a list price of just £19,800 (later £20,300) once the governments’ electric car grant was deducted, the Mii Electric remains one of the most affordable new EVs ever sold. Though the interior might not be as cutting-edge as – admittedly more expensive – rivals like the Honda e and Mini Electric, the Mii Electric’s standard equipment list is still plentiful, with heated front seats, a heated windscreen and rear parking sensors all included. The only notable omission is a touchscreen, with Seat instead giving you a clip to mount your smartphone into instead. It might seem like a budget move, but it’s the same on the Up! and Citigo, too, while an entry-level Fiat 500 electric is the same.

With the Mii Electric not being around for all that long, used prices are remaining quite firm, though. Expect to pay around £17,000 for a 2020 car with 5,000 miles on the clock, though you won’t pay significantly more for a newer 2021 car. There are no changes between cars of the two years, though,

Telling a Mii Electric aside from a regular petrol-powered Mii isn’t easy, with Seat making very few alterations between the two cars – the brand itself says there are only ‘delicate changes’ between the two cars. Your best option is to look at the number plate, with any Mii registered in

2020 or 2021 guaranteed to be electric, as the petrol car was discontinued more than a year earlier.

Aside from that, the changes are few and far between – even the charging flap is usually where you’d fill up with petrol. On the outside, some small stickers on the front wheelarches and an ‘Electric’ badge on the boot lid are the only giveaways. Things are slightly more apparent on the interior, with this EV getting a new white dashboard with chrome effect trim to set it aside, along with ambient lighting, sportier-looking seats and a black sports leather steering wheel.

The dials are unsurprisingly a bit different, too, with a new ‘power’ dial and clear indicator of how many miles you’ve got remaining.

Seat’s done a rather good job of cramming in quite a sizable powertrain into the dinky Mii Electric, which combines an electric motor producing 81bhp and 212Nm of torque with a 36kWh battery.

Though the Mii Electric’s 0-60mph time of 12.1 seconds doesn’t sound especially impressive, it actually feels far quicker than that figure suggests – it’s particularly rapid at any speed of up to 30mph. That battery also allows for an electric range of 160 miles, which is more than both the Honda e and Mini Electric, which can manage a claimed 139 miles and 145 miles respectively on a single charge.

While the Mii is showing its age in places, there are certain aspects of it that remain appealing. The stylish painted dashboard is a great addition, while this EV was the Spanish firm’s first car to come with ‘Seat Connect’. When using the brand’s smartphone app, it allows for remote access and management of the car, providing information like driving data and location, while also allowing you to set the air-conditioning remotely.

With two different driving modes to choose between – Eco and Eco+ – it allows you to reserve the Mi Electric’s battery further. The Eco+ mode in particular really restricts the power and tones down the climate control for when range is the most important factor above anything else.

The Mii Electric’s range of 160 miles is also very good, and averages 4.4 miles per kilowatt. Though it’s more likely to be closer to 130 miles in real-world driving, if you drive predominantly around town where you can make the most of its two regenerative braking settings – which essentially recovers energy when the car is slowing down – there’s the possibility for some very efficient and low-cost motoring.

Due to the Mii Electric being sold in relatively small numbers, not a huge amount is known about common problems with it. However, with Seat’s three-year, 60,000-mile warranty, it means models will be covered under warranty until at least 2023. The battery is also separately covered for eight years and 100,000 miles.

The only real issue with the Mii isn’t actually a fault with the car, but really the Seat Connect app that goes with it. Some owners report it not working as it should, with many of the advertised features unable to operate – including pre-conditioning and also being able to programme it to charge at certain times.

Thanks to a smaller battery than most, the Mii Electric will be quicker to charge than many of its rivals. Plugged in a public 7kW charger (or a wallbox of the same power), the battery can be topped up in just four hours, which isn’t long at all for a charge like this. You could also get away with charging with a three-pin plug at home, providing you don’t travel too far, with a charge this way taking 16 hours.

Though it doesn’t have quite the same rapid charging capability as some of its new owners, it can charge at up to 40kW, meaning an 80 per cent rapid charge would take around an hour. It’s certainly not the best EV for covering long trips though, with Fiat’s electric 500 with a 40kWh battery being a better fit – delivering 199 miles from a single charge, while 85kW rapid charging means it will be able to change almost twice as quickly as this Seat.

It’s also worth checking that the usual Type 2 cable (for public chargers) is included – there’s a place to store it beneath the boot floor – while a three-pin Mode 2 plug was an option when new, so many used cars for sale might not have this.

Though not the most modern or tech-laden small EV on the market, there’s still a huge amount going for the Seat Mii Electric. It still looks the part today, gets plenty of standard equipment and is also quite good fun to drive.

It’s also very affordable for a new EV, while the 160-mile range isn’t bad at all. So if you’re looking for a small electric car without all the gimmicks, the Mii Electric really is a great option.

Own a Used SEAT Mii Electric or looking to buy? Tell us about your experience