Could this be the future of caravanning in the electric age? Iconic American brand Airstream has just unveiled a new ready-for-production concept van that features its own battery pack and twin motors that can completely off-set the power drain on the car doing the towing.

Airstream claims the eStream is the first of its kind and is planning to start production if public reaction is positive enough. The eStream takes the form of the brand’s famous lozenge-shaped, polished aluminium vans but adds some seriously high tech kit under the floor. Integrated lithium-ion batteries with a capacity of 80kWh sit within the framework of the chassis while twin motors (on one each wheel) deliver a combined 242bhp. The drive system has been developed by German transmission experts ZF - a firm more famous for designing gearboxes for some of the world’s fanciest sports cars.

Although Airstream doesn’t specify how the drive system works, it is understood that the assistance motors are likely to operate in the same way as some electric bike motors do. When sensors detect that the vehicle is accelerating in a straight line, assistance is increased. As soon as the vehicle slows, power is cut and the motors start to regenerate power back into the battery. With 242bhp on tap and an 80kWh battery, Airstream predicts that the eStream could effectively eliminate the excess power drain that all electric tow cars suffer from when hitched up to heavy loads. The firm does not go into detail about charging but given the size of the battery pack, rapid DC charging should perfectly possible.

The integrated battery pack means that the eStream could potentially be used as an off-grid vehicle. The roof features 900 watt  solar panels that trickle power to the batteries and other onboard facilities. According to Airstream, this could allow users to live off the grid for up to two weeks.

Another clever feature of the eStream is a system that allows owners to manoeuvre it via an app. As both motors operate independently on each wheel, the eStream can be steered into a tight parking area with none of the hassle usually associated with trailer reversing.

The eStream concept is built on a new platform developed by Airstream’s parent company Thor and has the potential to be used as a base for a whole range of caravans, not just the famous Airstream. More information will be released closer to a production date. 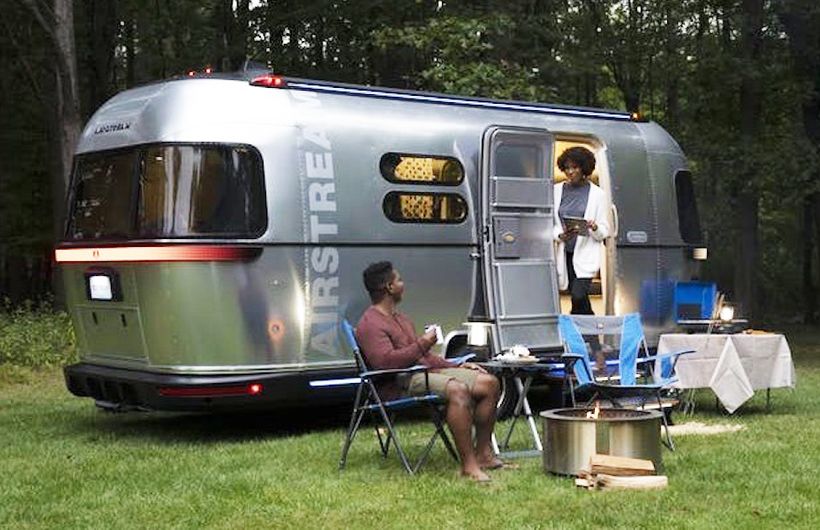