Audi is planning to roll out its ingenious flat-pack charging hubs following a successful trial in Germany. The German brand has already started work on a second site and has plans to create a network of Audi charging hubs across Europe.

The first trial site located in Nuremberg, Germany has proved a big success with more than 3,100 charge sessions carried out since its commissioning in January. Despite being Audi branded, the site is open to all electric car drivers able to use a CCS rapid charging connector. During the launch period, around 50% of visitors were Audi owners, with Tesla drivers making up the second largest group at 18% of visitors.

Although charging hubs with multiple high power connections are nothing new, the design and construction of the Audi charging hub introduces a number of industry firsts. The entire structure is modular and built from individual containers that hold either chargers (320kW Alpitronic units), control systems or second-life battery packs. The Nuremberg site also has empty containers housed within the footprint of the building to allow for future expansion and additional chargers.

Another unusual feature of the hub is that it is free-standing and self-sufficient for water and drainage. In an effort to reduce build times and simplify planning permissions, Audi designed the entire structure around a base that sits on top of any flat tarmac surface. Bosses say the ‘circus tent’ approach to building the hub means that a site can go from empty to fully functional in under a month. Planning permission for the Nuremberg site was granted in just five weeks thanks to its simple layout that requires no groundwork or complex connections to services. 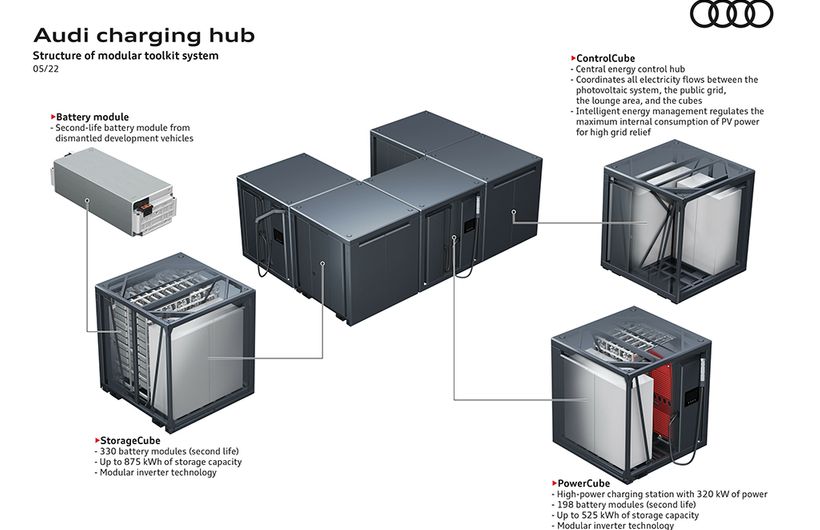 Despite having six 320kW chargers available, the site only requires a relatively modest 200kW grid connection. The second-life packs (taken from prototypes and pre-production e-tron models) hold up to 2,450kWh of energy. The control systems manage charging and discharging and ensure that all six chargers are capable of delivering full power. The whole site works like a garden water butt with a relatively low amount of grid power constantly refilling the packs. A 30kW solar array on the roof of the structure also feeds into the system, reducing grid draw even further.

According to Audi, the second-life batteries are perfectly suited to life at the charging hub, with bosses likening the facility to a ‘spa retreat’ for retired packs. The packs are slow charged and work as a group to deliver power when needed. This has the potential to extend the life of the batteries to well beyond their original design life.

Being an Audi design, the charging experience is slick and unlike any other charging hubs. All six chargers are fully accessible with no kerbing or raised surfaces while the bays are wide and well spaced, allowing for wheelchair access if required. The cables are mounted on a counterweighted arm that makes the connectors feel no heavier than standard Type 2 cable, while the screens are easy to navigate. Audi says that the next sites will also have height-adjustable screens while will allow wheelchair uses to use them at eye level. Customers driving Audi models will also be able to connect and charge Tesla-style thanks to software integration that recognises the car and automatically charges to the customer’s account. Non Audi drivers need to use either a charge network card (contactless payment isn’t widely used in Germany) or via a web page accessed by a QR code on the charger. 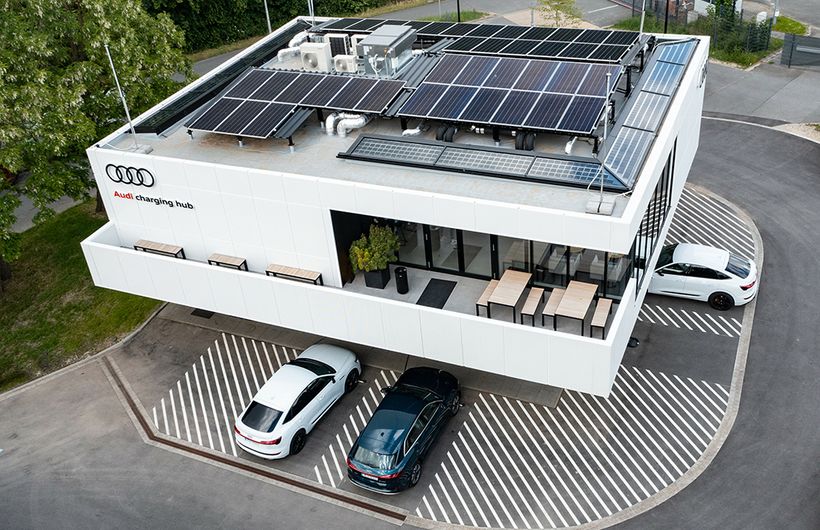 In terms of usage, Audi’s figures suggest that around 60% of users are return customers. Most of the repeat customers use the site because they don’t have access to home charging and use the site and its lounge area to work or take a break. The site has the potential to complete 80 full charge sessions every day but even on its busiest days has only seen 54 sessions completed. The average number of sessions per day, according to Audi, is 24.

Such has been the success of the pilot site that Audi is planning more. A second hub in Zurich has already been granted permission while new sites in Salzburg and Berlin are set to go live in 2023 and 2024. British drivers hoping to see an Audi charge hub appearing soon, however, will be in for a wait. Despite the UK being one of the brand’s largest for electric car sales, any further expansion of the charge hub pilot is unlikely to happen until 2025. 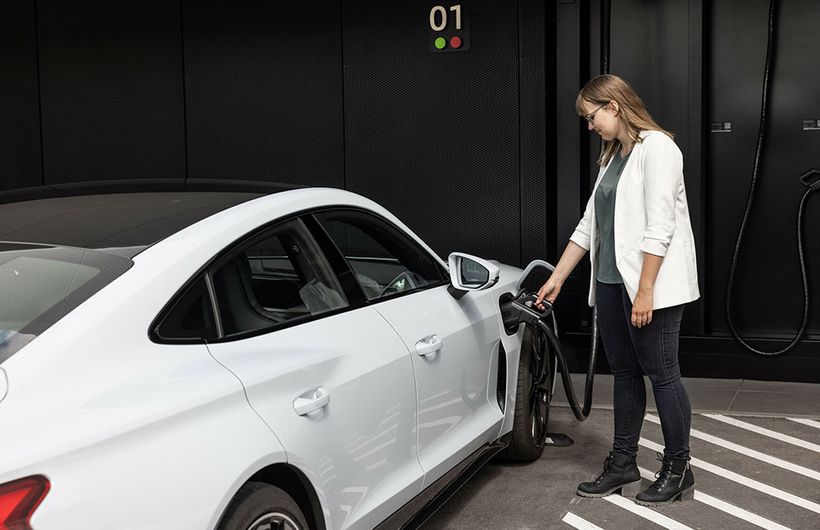