Electric car sales surged again in June with registrations now up by 56.0% on the year to date, despite a crippling lack of supply and year-long waiting lists.

According to official data released by the Society of Motor Manufacturers and Traders (SMMT), the Tesla Model Y racked up 4,194 registrations in June, which made it the UK’s second biggest seller during the month. The Vauxhall Corsa and MINI were first and third respectively. Although both models are available in pure electric form, the SMMT does not separate out engine types in its overall registration figures.

In June pure electric cars saw an 14.6% increase in volume, as market share continued to grow, reaching 16.1%, up from 10.7% a year before. Conversely, plug-in hybrid vehicle (PHEV) uptake fell by 4,425 units to take a 5.5% market share. In total, plug-in vehicles comprised more than a fifth (21.6%) of new cars joining the road in the month.

All other powertrains saw declines in registration volumes and market share apart from hybrid electric vehicles (HEVs), which, despite a 1,172 unit fall, increased their market share to 10.6%. Registrations as a whole fell -24.3% in June. The month saw 140,958 new vehicles registered, the weakest June performance since 1996.

Commenting on the figures, founder and CEO of Electrifying.com Ginny Buckley said: “Car sales are at their weakest in three decades, but electric vehicles are a bright spark in a declining market. Drivers are embracing the electric revolution, and sales of pure electric cars are up 56% so far in 2022. In contrast, diesel registrations are down 50.6% and overall sales have fallen by 11.9%.

“It’s interesting that plug-in hybrid vehicle sales are falling too. It seems the improvements in range and infrastructure mean buyers are gaining the confidence to go directly to a fully electric car.

But we can’t be complacent and need to go further and faster with infrastructure investments, with innovations like the Energy Superhub Oxford. These give drivers the confidence to switch and address the issue that electric car sales are skewed disproportionately to drivers who have access to off street parking.

There are three times the number of charging points in Westminster than in the whole of Oxfordshire and the ability to charge on the public network is critical for those large numbers of drivers who can’t charge at home. It’s critical we go faster and further to level up right around the UK.”

On the issue of availability, Mike Hawes, SMMT Chief Executive, said, “The semiconductor shortage is stifling the new car market even more than last year’s lockdown. Electric vehicle demand continues to be the one bright spot.” 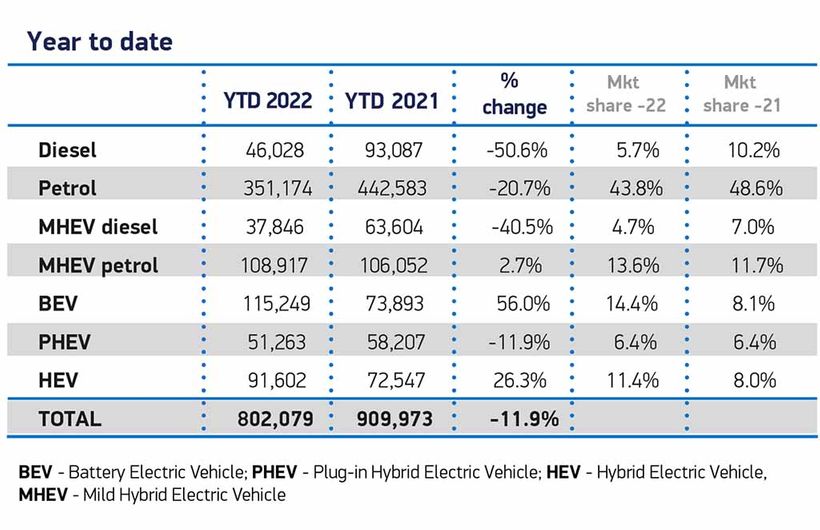 Data: SMMT
Continue the conversation in the Electrifying forum