Range anxiety and other strange terms you need to know.

When it comes to electric cars there’s a host of new jargon to get your head around and we’re here to help you do exactly that.

This is the fear that you will run out of battery power before reaching your destination or a charger.  It’s an often unfounded state of mind and whilst understandable there’s no need to panic.  In most electric cars (EV) the range is pretty accurate and achievable and most electric cars have built-in sat nav or an app, which will direct you to the nearest charge point before you get in trouble. You’ll soon get to know your electric car’s capabilities, stop staring at the range meter and start to relax into EV ownership.

No I’m not talking about an Armoured Fighting Vehicle, which I promise is a real thing!  This AFV stands for Alternatively Fuelled Vehicle.  An AFV is a vehicle that runs on substances other than the conventional petrol and diesel. That includes fuels like electricity, solar, biodiesel, ethanol, propane, compressed air, hydrogen, liquid natural gas… even algae could be a potential alternative fuel source of the future. The benefits of using AFVs include spending less on fuel and reducing carbon emissions.

Otherwise known as a Battery Electric Vehicle, a BEV is a car that gets its power solely from a battery, which is charged by plugging it in. When the battery runs out it won’t go any more and it doesn’t emit any CO2. The UK Government has said they will impose a ban on selling new petrol, diesel or hybrid cars 2035, which means that only cars that you’ll only be able to buy alternatively fuelled cars and vans, once the ban comes into effect.

One way of making a petrol or diesel engine more efficient is to add a battery and electric motor to help it out. This can capture the energy which is usually wasted when you slow down or push the brake pedal by putting the motor in reverse, so it becomes a generator. That can then be used to power the car, usually when you first start off from a stop or when you want a bit more acceleration.  To help the engine even more (and improve fuel consumption), you can choose a plug-in hybrid. This means you can use mains electricity to charge a larger battery, allowing the electric motor to be used more. You can even choose to turn off the petrol engine completely and use electric only for shorter distances.

When talking about an ICE in the context of electric cars, it has nothing to do with what goes in a drink. It’s an acronym for Internal Combustion Engine and us EV drivers get rather upset when an ICE vehicle parks in an electric car charging spot rendering it incapable of charging an EV. This is known as being ICEd. Occasionally, EV and hybrid owners may even park in a charging bay without actually plugging in to the charger or will overstay in the spot after they’re fully charged. This is known as ‘selfish’, rather than ICEd.

All batteries get old and lose some of their capacity to hold power as they get older. This is degradation and it’s accelerated by extreme heat or cold, We’re all used to it happening with our phones and laptops, but it’s more of a worry in a car where the battery may cost thousands of pounds to replace. It’s worth learning ways in which you can The good news is that the power packs in a modern EV are designed to be hardier than the batteries in a phone, and should be able to provide a useful range for the lifetime of the car. You can check the condition of your battery by looking at the State Of Health (SOH) either in the car’s menu, via a special app (such as LeafSpy) or by asking the dealer at a service. Once the car is getting old, the packs can be reused for home or industrial power storage and still have a value.

There are various ways you can get power into your electric car’s battery, ranging from Trickle Charging using a common-or-garden three-pin socket, up to Rapid Charging, which requires some very expensive kit and is usually found at service stations or some other public charging points. These are usually comparatively expensive to use (but still cheaper than petrol) so are commonly reserved for topping up the range when on a long journey. Rapid charging works by supplying the power in a way the battery likes (Direct Current) rather than the car’s on-board inverter having to change it from Alternating Current, which comes out of a mains electric supply from the power station. As a result of bypassing the inverter bottleneck, a top up to 80% capacity usually takes 20-40 minutes.

In a petrol car, you’re burning fuel to move forward. When you want to stop moving you press the brakes and pads squeeze against discs to slow the car down. It creates heat and wears away the brake parts.

In an electric car, as soon as you lift off the accelerator pedal the motor automatically reverses itself to become a generator and starts harnessing the energy to top up the battery. This is called regenerative braking.

In many modern EVs you can tailor the amount of regen braking to suit your driving style and preference. In a Nissan Leaf with an E-Pedal for example, you can drive without having to touch the brakes at all, except for an emergency stop.

Besides harnessing energy which is normally wasted, regen braking also means your brake bits need less maintenance and there are fewer particles released into the air.

This is the official figure which should give you an indication of how far an electric car will travel between charges. In theory it should be an accurate indicator of the sort of mileage you’ll be able to get, but in reality there are so many different factors which influence the range that you won’t really know until you try it yourself. City driving is better for electric cars, whereas motorways, hills, cold weather and driving enthusiastically all eat up power.  The WLTP part stands for Worldwide harmonized Light vehicles Test Procedure and was introduced after a few car makers were found to be ‘creatively’ finding ways of getting better fuel consumption and emissions figures in official tests.  The law makers decided to introduce a tougher assessment which is closer to real world conditions. As a rule of thumb, we’d knock about 20% off these figures to give you a good idea of the distance you can comfortably cover.

A kilowatt is a unit of electricity which is used in all sorts of measurements for electric car owners; from battery size and energy efficiency to charging speeds and energy costs. A kilowatt (or 1,000 watts) is roughly the amount of power needed to run a small electric heater. So, if you switched on that heater for an hour, you’d use 1kWh of energy. An average electric car, such as the Renault Zoe, has a 52kWh battery, so would be capable (in theory) of powering the heater for 52 hours. Instead it is used to power a motor which will take the Zoe for 242 miles. That means it uses 0.21kWh per mile – which is its measure of efficiency, in a similar way to miles per gallon in a petrol car. The kW can also indicate how fast a car will charge and how much it will cost. In its simplest terms, compare a 2kW ‘granny charger’ to a 150kW rapid charger and you can guess how long it will take to fill a 100kWh battery. If you are paying 14p per kWh for your electricity at home, a full charge of 50kWh on your Zoe will cost you £0.14 x 50 = £7.

We’ve become used to our electricity supplies being really reliable - we turn on a switch and the lights come on. But to make this happen, the supply companies have to balance lots of different ways of producing the energy. Renewables like solar and wind are great, but can’t be relied on to produce power in all weather. Nuclear is expensive and controversial and gas/coal produces pollutants. To make it worse, we all demand lots of power when we are awake and virtually none when we sleep. Electric vehicles can help balance this. A car like a Nissan Leafhas a battery which could power a three-bedroom house for three days. Multiply that by the number of electric cars in the UK and it soon becomes a major resource which could be used when there are power cuts or even just to cover some of the peaks in demand. Then the car can be recharged using energy while everyone sleeps. The schemes to harness this power are called V2H (Vehicle to Home) or V2G (Vehicle to Grid). In exchange for allowing your car to be used, the energy suppliers will give you cheap or even free electricity. 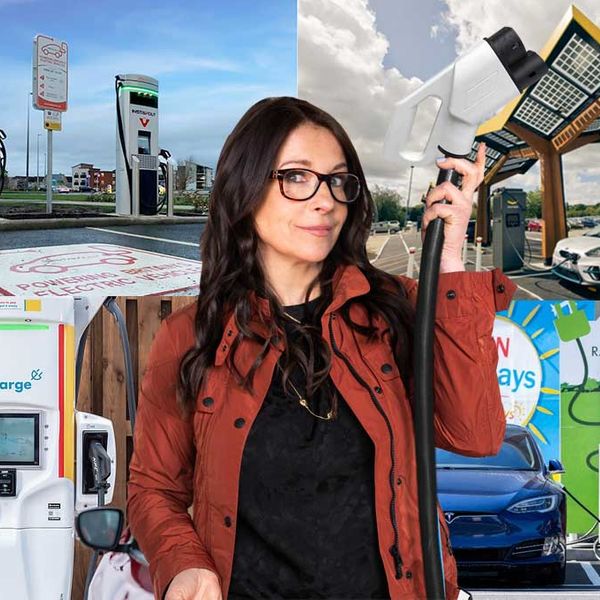