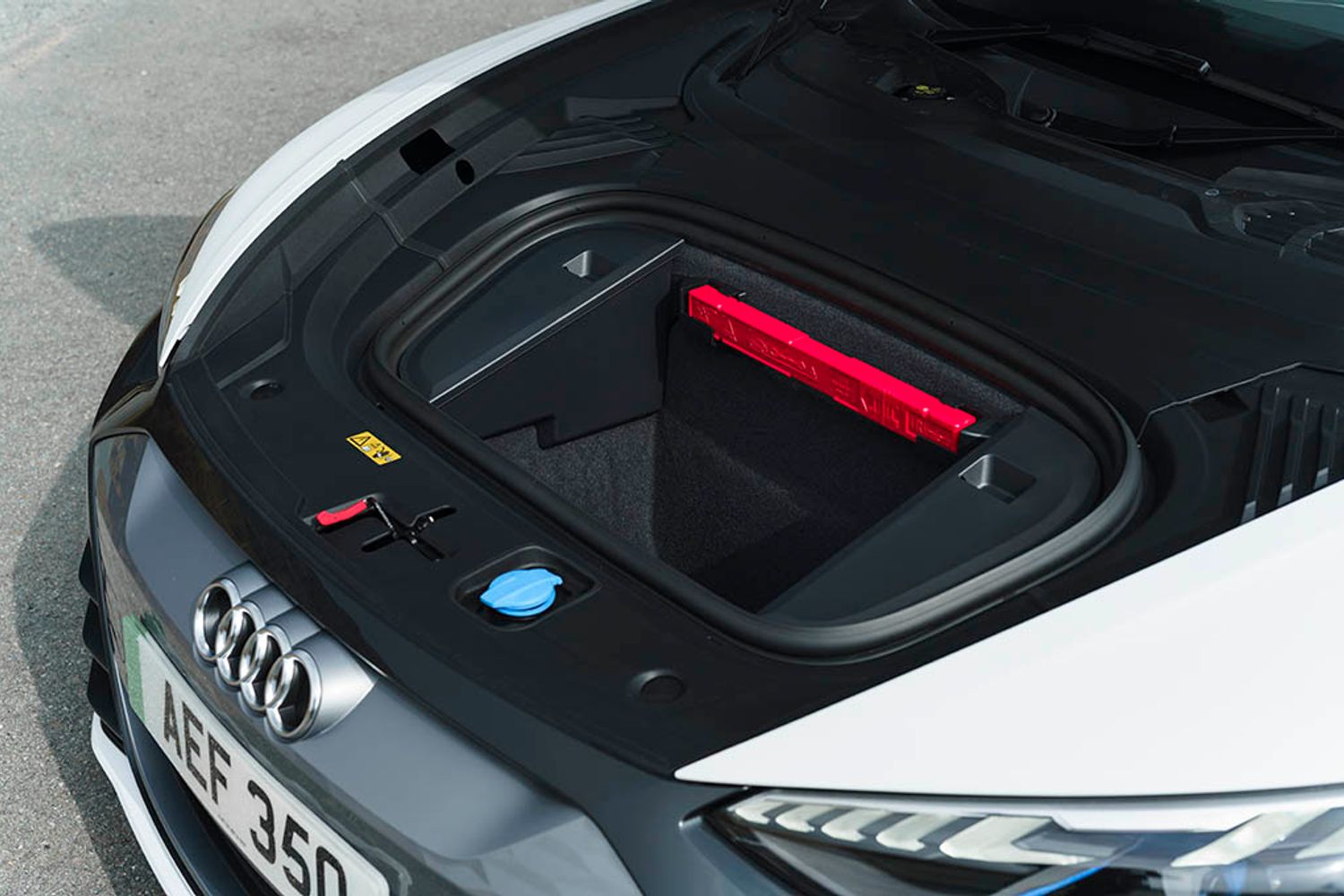 Its svelte shape hints at a saloon car not quite as practical as it could be, but there’s still a good amount of room inside the e-tron GT.

The e-tron GT has a decent range figure and a personality that’ll make you want to cover long distance in it – the purpose of any car that truly lives up to the GT tag, surely. So how does it cope? Well, the front seats are comfortable and should be spacious for all shapes and sizes, and can come trimmed in fabric or leather depending on how sustainable you’re feeling.

As you might expect, getting into the rear might bring on a little discomfort if you are anything over five feet in height, but once in the seats offer sufficient space for a six footer. This is partially because the battery pack has been shaped to give a ‘foot garage’ recess which compensates for the tapering roof line. In plain English, there’s somewhere to slot your feet beneath the front seats when you’re perched in the back.

Luggage can be stowed in the rear load area, which is well sized and completely flat. In total, its volume is about the same as a family car, but it’s accessed via a small boot opening rather than a full-sized hatchback, so it won’t morph into a practical tip-run car at the drop of a hat. But then it’s far too expensive and fancy for such endeavours anyway. There’s also another 81 litres under the bonnet – that’s enough for a carry-on bag or your charging cables.

As a relative of the Porsche Taycan, there’s a similar amount of screens in here. But Audi has done something rather wonderful and kept an array of physical buttons on the dashboard too. So you can adjust the climate control on the move without diverting your eyes from the road to navigate an annoying sub-menu, while the screens themselves operate very nicely. Audi’s MMI system is arguably the best of the big three German companies touchscreen offerings right now, with neat logic to its layout and no unnecessary chintz or a desire to throw in frivolous gesture control gimmicks.

Perhaps its neatest trick lies within the sat nav; resist using the phone link-up to plug in Waze or Google Maps – sticking to the native Audi nav – and the car will plan all your charging stops on long journeys, even right down to popping you on slower chargers for just five minutes in order to eke out your range to get you to a much faster charger a little further down the road. It’s very clever and takes a huge amount of pain from driving an EV over really long distance.

Euro NCAP haven’t yet crash tested the e-tron GT, but the signs are good for if they do – its Porsche Taycan cousin gets the full five star rating, as do Audi’s other e-tron models, all of which are currently SUVs. So we’d be mightily surprised if the GT was notably less safe than either of them. Naturally there are a handful of active safety systems as standard, though perhaps not quite as many as you’d hope. Forward collision and lane departure systems are included in the big-ticket RRP, but you might spend around £5,000 adding every other safety or alert system Audi offers, which are all collected together in optional packs. Adaptive cruise control and a camera-based traffic sign recognition system are part of the £1,355 Tour Pack, while a 360-degree parking camera and self-parking system is another £1,760.

« ReviewPerformance »
Own an Audi e-tron GT or looking to buy? Tell us about your experience