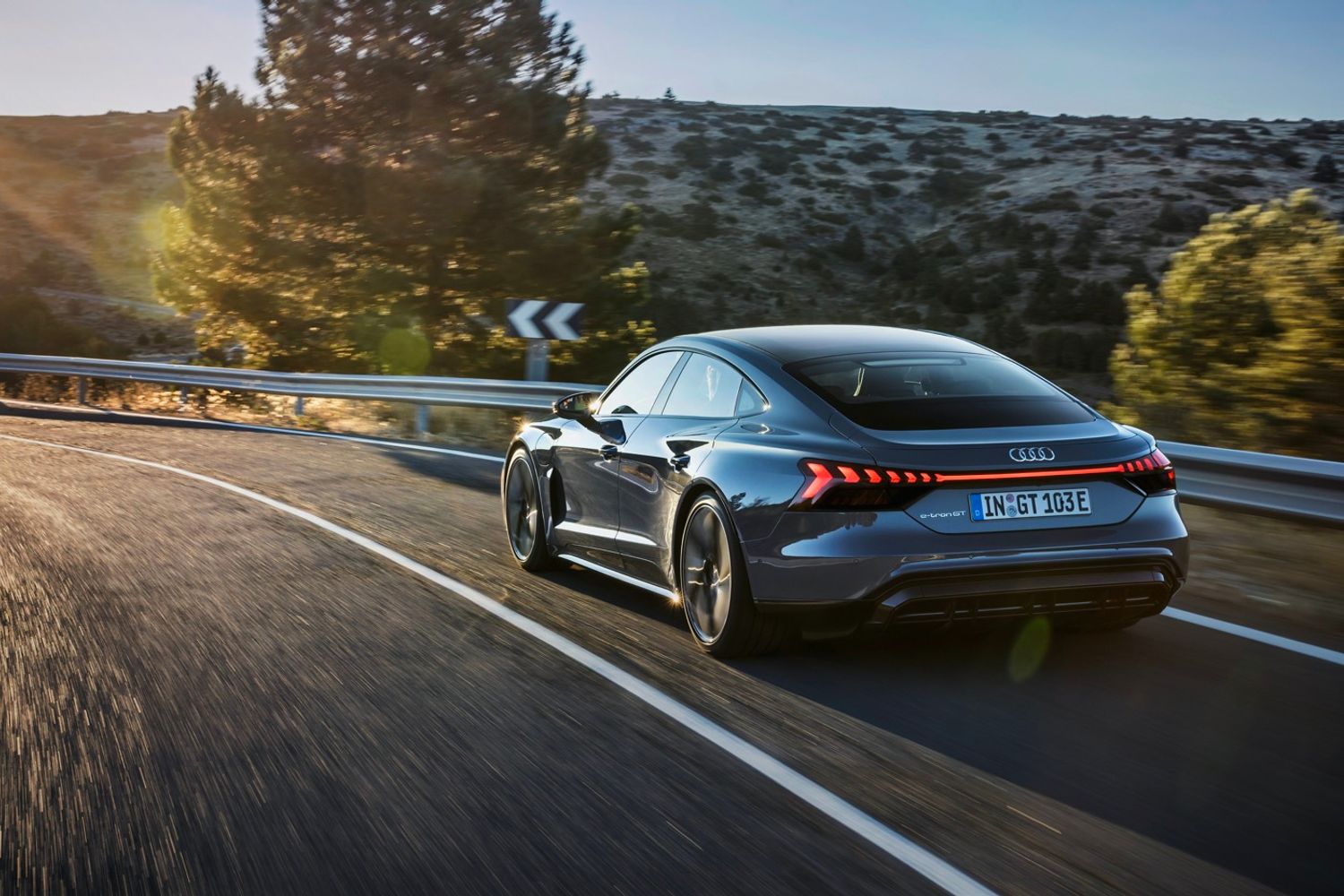 Cast your mind back to when you were at school. One of your friends casually mentions the homework that’s due after the lunch break and panic as you realise you haven’t done it. There’s only one way to avoid detention – you are going to have to copy someone else’s work. Who do you choose – the class swot, or the dunce?

It looks like Audi has been rifling through the bag of the swot of the VW Group – Porsche – to get its hands on the latest electric car technology. The e-tron GT is a thinly-disguised Porsche Taycan, which is no bad thing as it’s currently the most sophisticated electric car you can buy.

Of course Audi has been clever and disguised Porsche’s work so the teacher doesn’t notice. It’s got its own look inside and out and cheekily it’s a bit cheaper too, coming in at about £4,000 less than the equivalent four-wheel-drive Taycans. As you might expect, the Audi is only available with quattro.

But it’s almost compulsory to compare any electric car to a Tesla, so this Audi goes up against the Model S with prices starting at just over £81,000 and rising to a wince-inducing £112,000. So this isn’t a car which will be replacing the middle-managers’ diesel A4s in the company car park.

That’s probably just as well, as unleashing the GT’s performance to the masses could be seen as a little irresponsible. Even the entry level e-tron GT quattro produces 470bhp, which is more than some supercars. The faster RS model has an almost obscene 590bhp. If that wasn’t enough, both models get a boost for a few seconds if doing a standing start to give an extra 50bhp.

While that’s a feature which few owners will ever actually use, the battery and charging tech certainly is. The official range of the GT is 295 miles, with the RS losing 15 miles from that total on account of its fatter wheels.

When the time comes to top up, the GT will try not to leave owners waiting too long. Like the Taycan it uses an 800v system which allows the power to get into the battery faster without frying the delicate cells.

If you can find a fast enough charger, the electric coupé can charge at up to 270 kW, allowing it to add 60 miles of range in around five minutes. Charging from 5 to 80 percent could take less than 25 minutes. Even using one of the more common 150kW chargers will mean you can get enough juice to finish a long journey in not much more time than it’d take to fill up with fuel.

When you get home, the GT’s massive 93kWh battery will take a while to fully charge on a standard wallbox, while a three-pin plug will take so long it is measured in seasons rather than hours.

To help, the Audi will accept an 11 kW AC feed as standard. An optional onboard charger which increases charging capability to up to 22 kW will be available shortly after launch, which will be useful if you can sneak the car onto a three-phase supply at the office.

That’s enough of the stats. How does it drive? Predictably, it’s brilliant. We tried the standard GT and can confirm that anyone who thinks they need more power than it provides is mistaken, or just likes showing off. Even this ‘low power’ version will accelerate fast enough to give passengers nausea. Unlike some electric cars it doesn’t run out of puff at higher speeds either, making pulling onto a motorway or overtaking utterly effortless.

This is partially because of another bit of cleverness. The Audi GT has two motors, one for the front wheels and another at the back. The rear unit has a two-speed gearbox attached to it; this is highly unusual, as most electric cars have no gears at all. It means that the motor can be made more efficient, going into a lower gear for low-speed acceleration and then stepping up to give longer legs for motorway (or Autobahn) pace.

The driver doesn’t have to do anything of course as the car’s brain works out what to do. But it does give an odd sensation which most electric car drivers won’t remember – there is a brief pause in power and a discernible jolt as the box changes. It’s not worse than you’d find in a petrol performance car, but it’s odd all the same.

The cheapest Audi GT arrives with conventional suspension, but our test car was riding on air springs and huge 21-inch wheels. Besides giving the GT an astonishingly comfortable ride, it also allows you to raise the ride height. This might seem like the sort of gimmick you’d use rarely, but the Audi GT’s front spoiler ground out on speed humps without it in the higher position.

The Audi GT is supposed to be a Grand Tourer rather than a sports car and it does a very good job of making a journey effortless and relaxing. There are the obligatory driving modes or course, and in ‘Comfort’ or ‘Efficiency’ it is quiet and relaxing. The ‘Dynamic’ mode doesn’t quite unleash hell, but it does make the car’s steering and throttle responses more urgent and firms up the suspension too.

It’s all too easy to add speed, and if you arrive at a corner too fast the weight of the GT starts to make itself felt, even though the centre of gravity is nearly at floor level. But a touch of the brakes brings back your confidence as they bring the speed down effortlessly.

However, you will need to use the brake pedal to slow down. The Audi GT does have selector paddles behind the steering wheel which vary the amount of regenerative braking effect you feel when you lift off the throttle, but the difference between the two is almost indistinguishable and certainly not enough to allow driving with just one pedal. It makes us wonder why Audi bothered with the paddles at all.

The flat-bottomed steering wheel they are attached to is another source of confusion. The sensations which come through it are astonishing; the sort of feeling which you’d normally only find in a proper sportscar rather than a heavy GT with fat tyres. In fact, we wonder if it’s quite right for a Grand Tourer. Although it’s great to feel every change of surface, puddle and leaf for a while and if you’re in the mood, it’s not necessarily what you want on every journey.

Another essential part of an Audi GT is actually being practical enough to cope with a dash across a continent, should the mood take you. The front seats are comfortable and spacious enough, and as a sign of the times were trimmed in fabric rather than leather in our test car.

Getting into the rear will involve some grumbling if you are anything over five foot, but once in the seats offer sufficient space for a six footer. This is partially because the battery pack has been shaped to give a ‘foot garage’ recess which compensates for the tapering roof line.

Your luggage should be comfortable too. It can be stowed in the rear load area, which is flat and wide. In total the volume is about the same as a family car, but it’s a boot rather than a hatch though, so you’re not going to bring back a sofa from Ikea in an Audi GT. If you’ve run out of space for the scatter cushions and tealights though there’s another 81 litres under the bonnet – that’s enough for a carry-on bag or your cables.

Which leaves the big question of which sporty electric saloon is the teacher’s pet? Is the Taycan, Tesla or Audi GT top of the class? We will have to wait to get all three together to be sure, but the Audi is intriguingly but subtly different to the Porsche. It might have copied its homework, but it could possibly have improved it too.

As for the Tesla, the Audi aims mercilessly at the Model S’ weak spots with a beautifully-made interior which is equipped with proper buttons for key functions. It’s not ultimately as fast, but the way it drives is far more confidence-inspiring. Which will make the grade? It’s an exam we are looking forward to.

FAQs »
Own an Audi e-tron GT or looking to buy? Tell us about your experience