“Wow - this is the Mustang we've been waiting for. I've loved fast Fords since I was a kid, and I'm really impressed with the job Ford has done with this. Yes, it's a lot of money for a Ford, but there's no questioning the quality of the car or the performance it delivers.”

“To be honest, they had me when I heard that it would come in Cyber Orange and Grabber Blue - two of the best car colours in the world! It will be fascinating to see how the GT squares up to the Tesla Model Y Performance when it arrives next year. They're so close on price and performance. ” 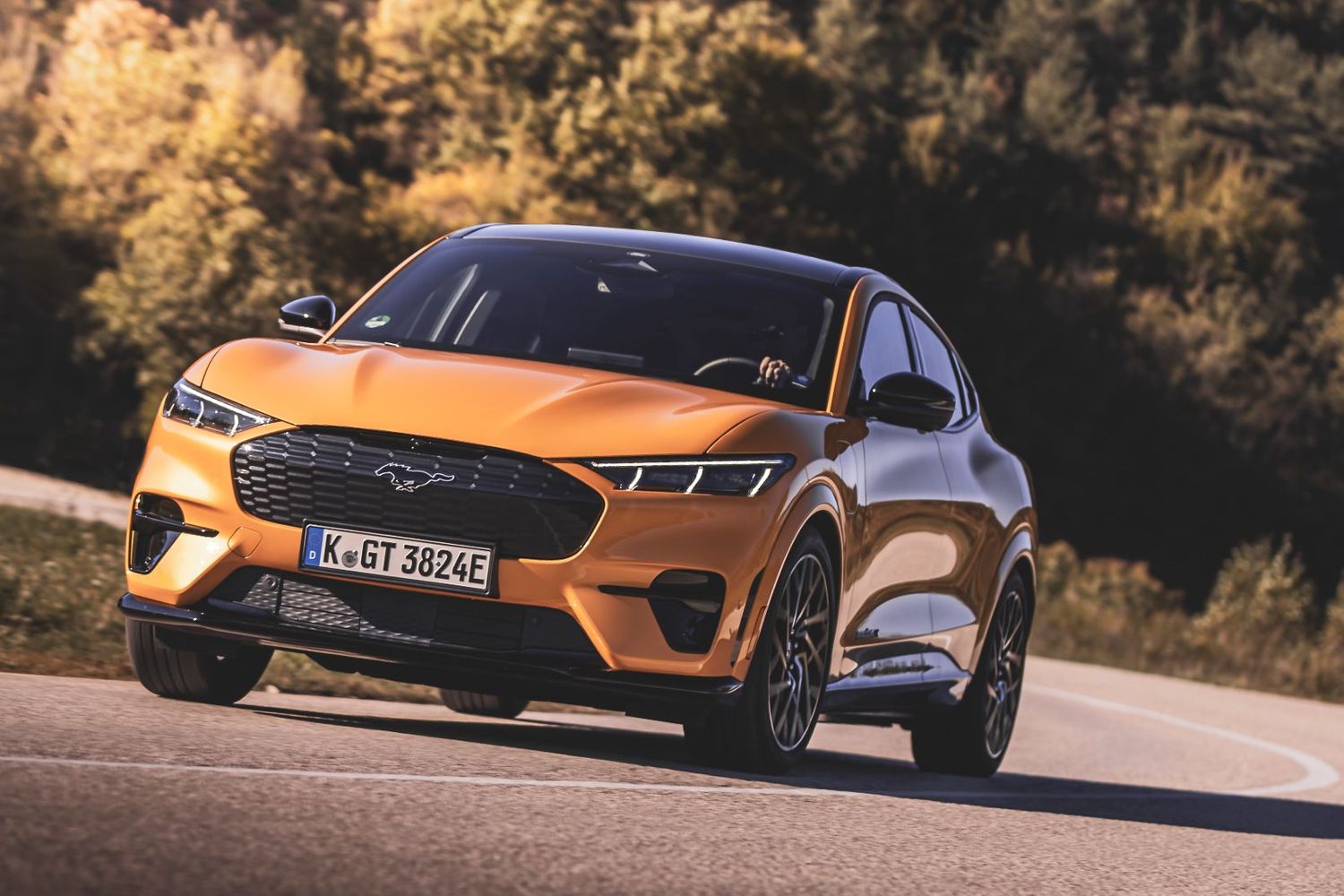 If you count yourself as a bit of a ‘car person’ you’ll know that the concept of a high performance Ford isn’t an unusual one (if you're not a car nerd - please fast forward to the second paragraph). Generations of car lovers have been tickled with a collection of fast Fords that have often come to define an era. From the Capris of the 1970s, the Sierra and Escort Cosworths of the 80s and 90s to the Focus RS models of the noughties and beyond, Ford has always had something in its line-up to turn heads and drop jaws.

Ford’s latest performance flagship is the first to be powered by electric - the Mustang Mach E GT. In a move that will almost certainly get many of the brand’s die-hard traditionalists hot under the collar, Ford has appropriated both its revered Mustang and GT badges for a large, five-seater battery-powered SUV. You can almost hear the blood boiling.

Let’s start with the important new stuff. The GT is the third Mustang Mach E to join the range and comes with a hefty £65,080 price tag. For that you get a dual motor, four-wheel drive system. Although Ford describes the motor as 'all new', it's the same unit as fitted to the current AWD. In the GT, the only difference is that the same 240bhp motor is also installed up front. Combined, the two motors deliver a whopping 480bhp of power and an equally beefy 860Nm of torque. To put that into perspective, the torque figure is 15 percent higher than that of the petrol-powered Ford GT supercar, while the power output is more than twice that of an Escort Cosworth.

Keeping the motors fed with electricity is an 88kWh (usable) battery pack - the same as fitted to the standard AWD model. However, during the launch presentation, Ford revealed that it plans to increase the usable capacity to 91kWh following feedback from early customer cars. As a result, UK buyers will have 91kWh at their disposal by the time right-hand drive production starts early next year.

When you do need to stop, the Mach E GT can recharge at up to 150kW, which is okay but not exactly record-breaking in the new era of ultra-fast charging cars such as the Audi e-tron GT, Porsche Taycan, Kia EV6 and, well, every Tesla. That said, the GT can suck up enough charge to adds 60 miles of range in 10 minutes while a 10-80% charge will take around 45 minutes. Which, of course, will be perfectly adequate for most drivers.

In addition to the performance increase, the GT also delivers a sportier drive thanks to the introduction of a number of new features. In terms of driving dynamics, the GT is equipped with Ford’s MagnaRide 2 adaptive suspension as standard. This means the driver can adjust the way in which the dampers or shock absorbers work. In simple terms, a press of a button makes the car feel stiffer with less body roll for sportier driving or softer for when you don’t want to rearrange the vertebrae in your spine on every speed bump.

The GT also comes with uprated brakes. At the front, the discs are 385mm, which is handy because they have a lot of work to do. With a kerbweight of 2,250kg and the additional performance, they certainly earn their keep.

To give the GT a sportier driving experience, Ford has also changed the balance of the power distribution between the front and rear wheels. While this feature already exists on the standard AWD model, the GT gains an extra driving mode - Untamed Plus – along with a new, more powerful motor for the rear wheels. The new motor can deliver peak torque (that’s the force that delivers acceleration) in just 0.5 seconds. In reality, that means a jab on the accelerator pedal launches you forwards as if you’ve been hit by a train. Ford claims a 0-62mph time of 3.7 seconds, and while the twisting Croatian country roads at the European launch were far from ideal to verify this, it certainly feels like a very, very fast car.

Engage the new Untamed Plus mode and the Mach E GT driving experience gets a little more focused. The steering response is sharpened, the accelerator pedal travel is reduced and the suspension is made stiffer. In addition, more power is directed to the rear wheels than the front to give a sportier feel when accelerating out of corners. Disappointingly, you can’t select one-pedal driving with Untamed Plus, so you’ll be frittering away plenty of potential charge regen by letting the brakes do all the hard work.

Ford says that Untamed Plus mode has been developed for ‘track use’ which is both a clever way of justifying the performance boost and making it sound rather exotic. As part of the package, the traction and stability controls have been recalibrated to allow drivers to access all the performance with fewer interventions from the safety systems.

And if you’re a fan of the piped-in engine noise, you’ll be pleased to learn that in Untamed Plus mode, you can hear it even when you’re stationary.

To drive, the Mach E is as calm or as mad as you want it to be. Which is a pretty impressive achievement and something only an electric car is really capable of. Where previous fast Fords have been incredibly focussed performance cars, few, if any were particularly good at the normal stuff, like taking your nan to bingo. Or going any further than two junctions on a motorway without giving you a migraine.  Engage Whisper or Active modes (the calmest of the driving modes) and it bounces along like a friendly greyhound, neatly wafting over bumps and floating silently on long motorway for as long as you want it to. Then, when you want to turn up the excitement, engage any of the sportier modes and the GT becomes a bona fide sports car with ultra-fast reactions and the more acceleration than any sane human needs on a public road.

The brakes are superb and do a fine job of hauling the 2,085kg Mach E GT to halt. However, the steering still doesn’t feel like the finished article. While the accuracy and turn-in is spot on, it still has an arcade game quality as you wind on the lock. Matters aren’t helped by the intrusive lane keeping assist system that tugs away at the wheel whenever the cameras sense that you’re getting too near a white line.

As for consumption, on the twisting A roads of our Croatian route (and with plenty of Untamed Plus use), our GT managed 2.9 miles per kWh. Which, in theory would have delivered a real world range of 255 miles. No doubt a little less throttle and Whisper Mode would have boosted that significantly.

Design-wise, the GT gets a number of styling tweaks inside and out that tread the tricky line between sporty and vulgar. You won’t find any Cosworth-style ‘whale tails’ here, nor any Focus RS rally-style rear diffusers. Instead, Ford’s design team has opted for a fairly subtle collection of features that include a black honeycomb front ‘grille’, black roof and mirrors and a new bumpers with bigger cooling intakes. The 20-inch wheels are new for the GT and the largest available. In the metal, they look terrific and have the unfortunate side-effect of making the standard Mustang models look a little under-wheeled.

Inside, the GT is largely the same as the AWD model with the notable exception of new seats that feature extra shoulder bolsters that do a decent job of keeping you firmly in the seat through corners. And, being a car designed for a North American market, there’s plenty of space for drivers of a larger frame. The seats are supportive but not exactly figure-hugging, while the range of adjustment on the seat runners and the steering column is good. That said if you’re a member of the six foot plus club, expect your left knee to catch the right-hand edge of the centre display screen.

The GT’s infotainment system is the same as fitted to the other models in the range, and that’s no bad thing. The main 15-inch tablet display is quick-witted and easy to navigate while the wide-screen display behind the steering wheel carries all the info you need to see all the time such as navigation directions, speed and battery state. Combined, both screens work well and come with the usual Apple CarPlay and Android Auto integrations.

We’ll need to wait until we’ve tried the GT on UK roads to deliver a definitive verdict on Ford’s new range-topper, but the early evidence suggests that Ford has served up a great package. It looks great, drives well and has a decent slug of range to makes it a practical everyday electric sports car. Yes, some elements verge on the gimmicky, but overall, Ford has done a fine job.