It might use the same crucial components as the Hyundai IONIQ5, but the Kia is sleeker, sportier, and more efficient. We love it.

“Don't underestimate the importance of the Kia EV6. While rivals might be able to match its performance, efficiency, space and driving dynamics, nothing in this price range can get close to its recharging speeds. That will overshadow everything else when you are on a journey and in a hurry. ”

“I can see why the EV6 is one of the most researched cars on Electrifying.com - the figures and tech list all add up to make is a compelling choice, even if the prices raise an eyebrow. I might be tempted to plump for the more interesting looks, affordable prices and relaxing drive of the Hyundai IONIQ5 though. ” 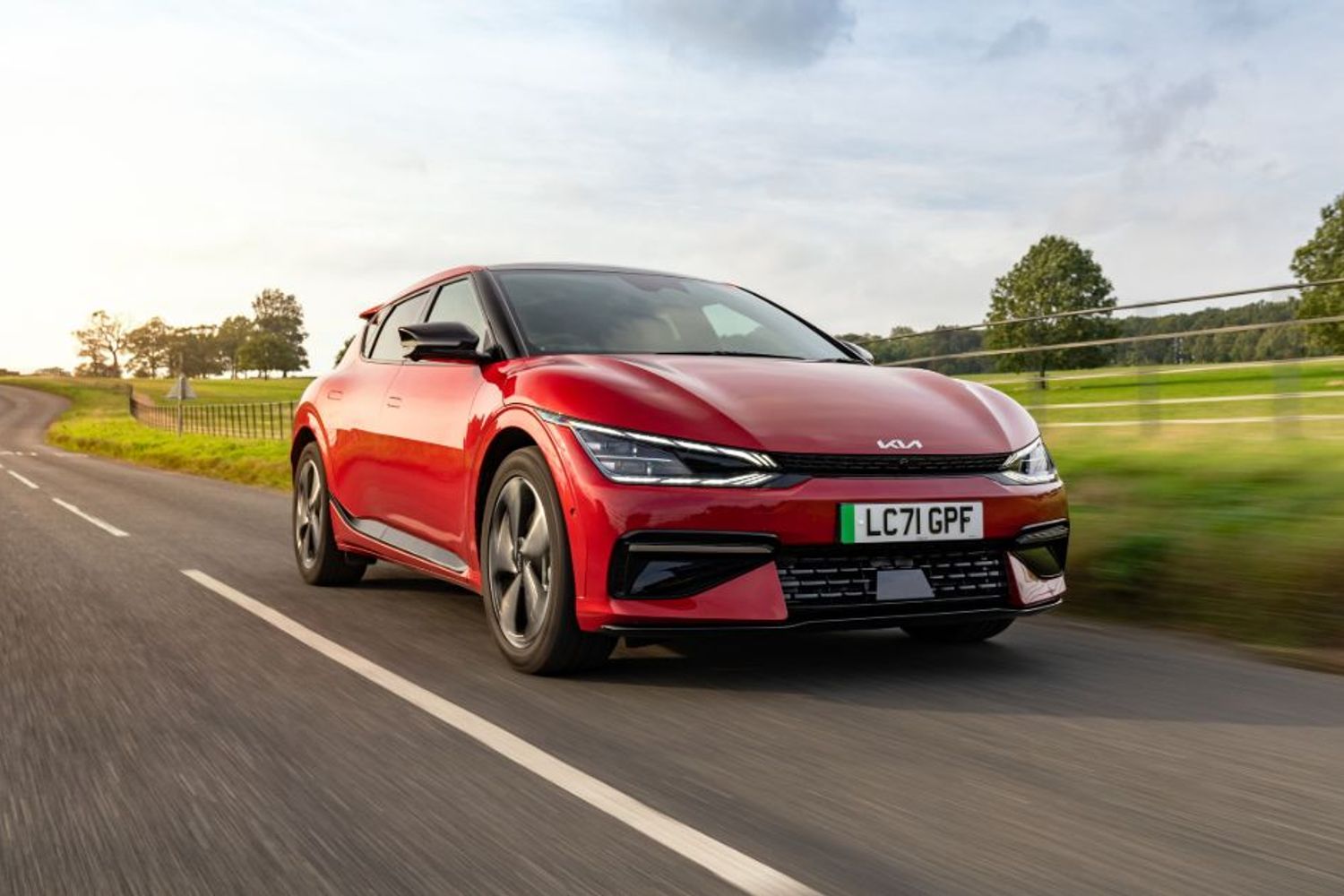 On paper at least, the EV6 and its sister car from Hyundai do make the rivals from VW, BMW and Mercedes seem outdated and overpriced.

Just like the IONIQ 5, the EV6 uses 800-volt technology. Before you glaze over, this is significant. It means the battery can charge much faster - only the Porsche Taycan and Audi e-tron GT currently have the same system.

Find a suitably fast charger – such as the new units popping up at service stations and charging hubs - and it means it will zap from 10 to 80 percent in 18 minutes and the power for 60 miles in less than five minutes. That will seem more important than any 0-60 time when you are on a long journey with your kids in the car.

The EV6 also follows a new design language which is purposely distant from the Hyundai. Where the IONIQ 5 looks retro and angular, the 4.68-metre-long Kia is much sportier and difficult to pigeonhole. Is it a coupe? An SUV? A hatchback? Like the Polestar 2, it seems to be a mix of all these genres.

Inside there is reasonable space for people and luggage, though that exciting styling compromises things a little. The EV6’s boot holds 490 litres with an additional small frunk under the sloping bonnet to store cables or muddy walking boots. Its size varies depending on whether you have rear- or all-wheel drive.

Unlike the Hyundai there’s also a conventional centre console and plenty of other pockets and places to lose your sunglasses and mobile phone. The cabin even promises a clear conscience: over 100 plastic bottles per car are recycled to weave into thread for the seat covers.

As the swoopy looks suggest, this is a sportier-feeling car than the Hyundai, with tauter suspension and less body roll in corners. There’s also plenty of performance, even in the more affordable versions.

Right from the start, Kia is offering the EV6 in multiple configurations with up to two electric motors for rear or all-wheel drive, as well as two batteries with 58 kWh or 77.4 kWh – although UK models will only have the larger battery at first.

This results in power outputs ranging from a reasonable 226bhp for the entry-level model to an impressive 577bhp for the sporty flagship GT, which, however, will not come until the second half of 2022 and extends the price range to around £65,000 – unfamiliar territory for Kia customers. But with the kind of power and speed to bait much more expensive petrol performance cars.

Depending on the motor and battery package, the Kia can travel up to 328 miles in the official lab tests, and the use of intelligent brake energy recuperation ensures that the discrepancy in the real world is not too great.

You can use paddles on the steering wheel and three driving profiles if you want to change the amount of energy the car use and retrieves as you slow down, but it’s easier and more efficient to let the EV6 work it out for you. The car will take into account the distance to other traffic, your speed, hills and curves before making a decision about the best way to use energy. It is so sensitive that it will make drivers who have never driven an electric car feel instantly comfortable.

If you are feeling generous with the power you’ve saved, you can even donate it to another electric car. Put a gadget in the charging socket and you can tap into the battery power with a feed of up to 3.6kW. Besides charging another car, it could drive the lawn mower at the allotment, the sound system at a campsite festival or give your e-bike a charge.

That’s not the only fun to be had, as the driving pleasure is not neglected – and not only because the EV6 is sportier and more tightly tuned than the IONIQ 5. Our test car is the current range topper, a GT-Line with 321bhp and all-wheel drive. It accelerates to 62mph in 5.2 seconds, which is plenty and would have put it into supercar territory a couple of decades ago. Certainly it feels fast enough, with a smooth delivery of power right up to motorway speeds and beyond if you are in Germany. ​

The steering doesn’t have quite the sharpness of a BMW and you can still sense that this is a heavy car is some bends, but it is certainly easier to drive quickly than the Hyundai. Where the IONIQ 5 seems to encourage you to take a more relaxed attitude to getting through bends, the EV6 feels more at home on a twisty road. That said, it isn't quite as polished as it could be in some areas. In general driving, the Kia is comfortable and easy to live with thanks to its instantaneous acceleration and decent suspension set-up. However, things aren't so impressive in Sport mode which feels a little artificial and makes the EV6 feel jerky and harsh to drive. It's not a huge problem as Kia isn't selling the EV6 as an outright sports car, but it's not the most relaxing car to drive if you leave it in Sport.

So is it worth the wait? Absolutely. With the Kia EV6 and the Hyundai IONIQ 5, The Koreans now have a pair of cars which will once again make rivals look obsolete, with impressive technology which makes life better for electric car owners. The EV6 is undoubtably the more conventional looking and sportier driving of the two, which might make it your first choice. It could be time to join the queue.

« FAQsRange »
Own a Kia EV6 or looking to buy? Tell us about your experience