Stylish, speedy, spacious and space-age, the Model X is an impressive alternative to ‘normal’ SUVs and is all-electric. It’s not cheap though.

“Whilst it’s not an inexpensive car the Model X is packed with personality and is currently the only electric car that can seat seven. It’s light and spacious and is an SUV with personality that makes many of its rivals look like a dull choice.”

“The show stopping Falcon Wing doors will entertain young and old alike and the latest tech, delivered over the air, will help to keep you safe on the road. Tesla’s excellent charging network is a huge bonus and gives you extra peace of mind.” 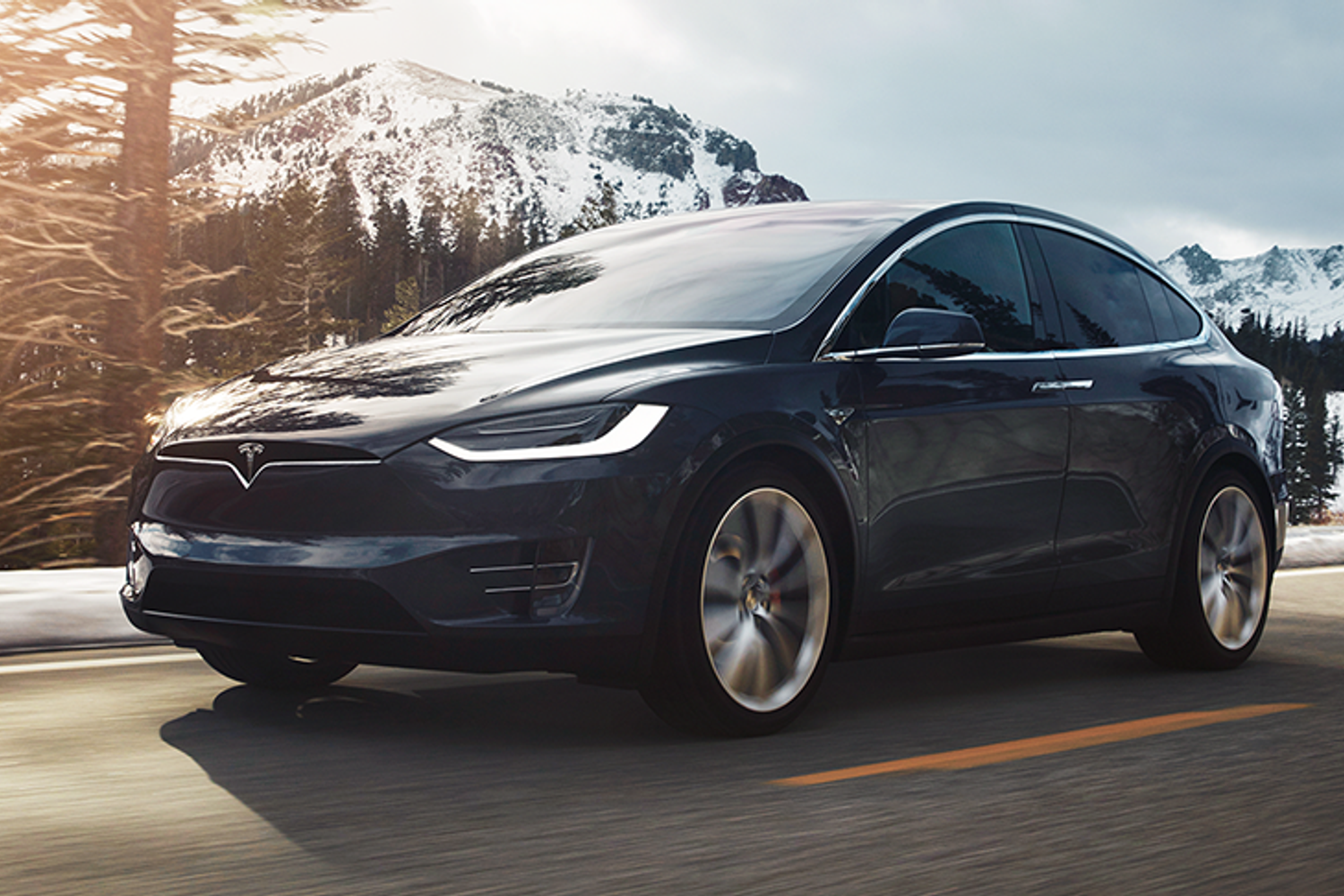 The Model X has more space inside than some vans – it is simply huge.

It might look like an overgrown hatchback, but the Model X is a big car – in fact it is longer and wider than a Range Rover. That might make it a squeeze on small roads, but it also means it is huge inside. In fact, the only cars with more space for luggage are based on vans. For example, a Model X has boot capacity of 2,487 litres, compared to the 1,500 offered by a traditional big estate car like a Volvo V90.

You can choose to fill some of that space in the Tesla with a pair of extra seats, turning the Model X into a seven or even a luxury six-seater. The space in the rearmost seats might be a little tight for taller adults, but accessing the back is made easier by those ‘Falcon’ doors, which open even in tight spaces thanks to some clever sensors. They are a real party piece which can draw a crowd, but they are quite slow to operate and you might wish they were a bit more conventional if it’s raining or you’re in a hurry!

As you would expect from Tesla's flagship, the Model X is packed with tech that makes other cars look like antiques. It might have been around since 2015, but the Model X is still one of the most advanced cars on the road. Even the earliest models now have the latest technology, thanks to Tesla’s clever system of upgrading software ‘over the air’, so owners get new features and updates without having to visit a dealer. Just like your mobile phone, they just get sent straight to your car over the airwaves.

Some of these upgrades are genuinely useful, and have included more self-driving capability or better battery management software. Others are pure entertainment, called ‘Easter eggs’, which give the car hidden fun functions such as a retro Atari games package, a virtual whoopee cushion which can be activated when people sit on the seats or a special demo show which operates the doors and lights in time to music.

The Falcon doors are another show-stopping feature. A series of sensors mean they can open even in confined spaces such as car parks without scraping the paint. Other electronics and cameras keep an eye on the car when you are not around and will alert your phone if it is being tampered with.

There are very few cars on the road which could claim to be safer than the Model X. Its technology and clever design means it will be far less likely to have an accident in the first place, but should the worst happen it will take good care of the occupants.

Firstly, the heavy battery pack is below the floor level, meaning the Model X has a very low centre of gravity. This means it is far more controllable in an emergency and incredibly difficult to roll over – think of it as like a traffic cone which has a heavy base and is therefore difficult to tip.

Then there is a comprehensive collection of electronic guardian angels, checking for other vehicles or pedestrians around the car and warning the driver or even taking control if the computers sense a collision might happen.

If the Model X still manages to be involved in a crash, it has an incredibly strong body and plenty of airbags. It will even call the emergency services and tell them exactly where you are.

As a result of all this the Model X scored top marks in American independent crash tests.

« RangePerformance »
Own a Tesla Model X or looking to buy? Tell us about your experience