Toyota’s first-ever ground up pure electric car is competent in every way and could be very easy to own and to live with. We've just no idea when it will actually go on sale.

“Toyota’s first proper pure electric car brings expertise gained from years of partial electrification. The problem is the wheels fall off and there is no sign of a fix.”

“It’s as much about the package and lease deals and lack of worry as it is about the car. Car is very nice, efficient, no blowing off of socks, but it’s not designed to. ” 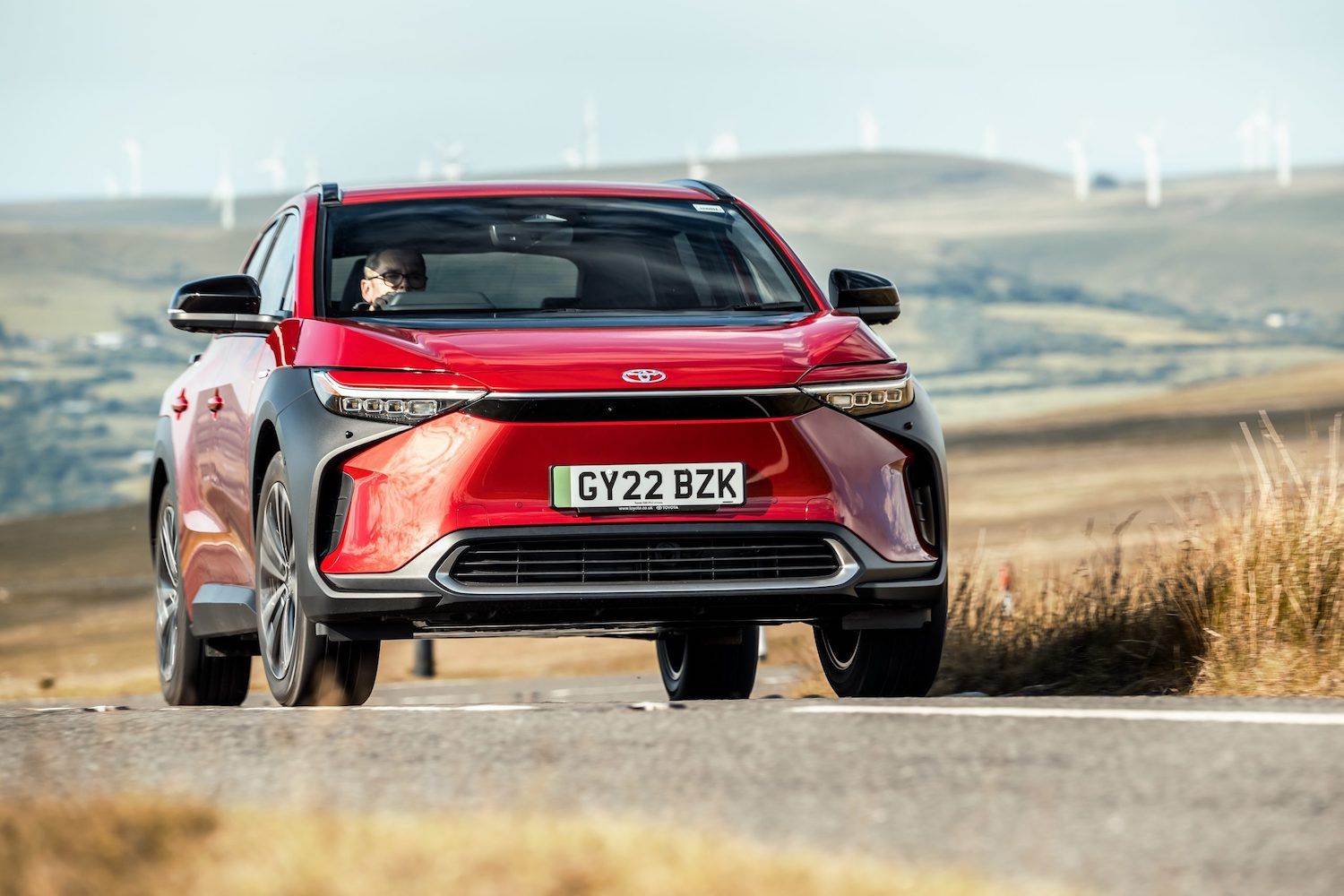 There’s one thing about this new Toyota which immediately sparks conversation. It’s not the range, the styling or the charging speed. It’s the name. Perhaps this is a well-planned move by Toyota, after all there are drivers who have owned a Nissan Qashqai for a decade and still can’t spell it.

It may look like the kind of name that appeared after a cat walked across a computer keyboard, but the Toyota bZ4X is Toyota’s very first pure electric car. And there’s plenty to like from the off.

Look beyond the name though and it’s a big deal. Why? Because its Toyota’s first attempt at a bespoke pure electric car. Which means it doesn’t self-charge - you have to plug it in.

Let’s look at the basics first. It’s a five-seat, pure electric SUV that goes up against the myriad of other electric five-seat SUVs that every other manufacturer is currently pumping out.

To make it stand out it has some pretty bold looks, full of angles and sharp bits which will polarise opinion. But that’s good in a world of blandness.

There’s a water-cooled 71.4kWh battery built into the structure under the floor for added rigidity, and it comes with either one motor driving the front wheels with 201bhp and 317 miles of range - depending on the spec - or an all-wheel drive version with two 107bhp motors at either end. That one has 215bhp and a possible 286 miles of range. They’re excellent figures - especially with the single-motor version breaking the magic 300 mile barrier with 4.4miles per kWh efficiency. That’s properly competitive.

And it’s not just got decent range, but pretty good charging, too. Early cars will only have 6.6kW AC charging, but cars produced from later in 2022 will all have 11kW. And all cars get 150kW DC charging from a more common CCS2 plug - no CHAdeMO charger here, unlike the Lexus UX300e - so you’re looking at half an hour from 10-80% on a powerful enough public charger, and about nine and a half hours on a home wallbox. That’s at the upper end of what we expect for this kind of car, so all good.

Quality is also good - there’s a range of recycled and sustainable materials, and while there are one or two cheaper bits, it feels very nicely put together. It's not inspirational or interesting, but it works. There’s storage here and here, and the place where you put your phone has a transparent lid, so you can see if you’ve got a message. Which you then have to resist looking at until you’ve stopped.

As for when you’re on the move, well, it’s all very calm and competent. Toyota seems to have gone for that vibe rather than neck-snapping acceleration. Both models are perfectly capable of zooming about, but they suit cruising better.

The steering is a bit fake-feeling but it does the job, and the car has a handily tight turning circle. And although the bZ4x does feel a bit heavy at times, it gets around corners without fuss. In fact, that’s a good way to describe the way this car drives overall - it’s really competent without being overly emotional. Even the brake re-gen is good but not super-aggressive.

But it does have a couple of tricks up its electronic sleeves. Because this car was developed in conjunction with Subaru, the all-wheel drive BZ4x has a set of off-road programmes that lets it cope in mud, snow or whatever you can throw at it.

Now, it’s never going to be a Land Rover Defender, it certainly makes the car a solid companion when things get sticky. Need to get up a tricky track in winter? This Toyota will be the best electric car for it. And it tows up to 750kg, and can wade decent-sized puddles too.

But the big news from Toyota here has a lot to do with the backup you get with a bZ4x. Toyota is pushing the ‘one-stop-shop’ subscription model, and for fuss-free ownership.Initial leasing figures seem to suggest that the bZ4X will probably end up in the same hard-fought arena as all the decent electric SUVs - so £600-ish a month. Although Toyota’s big battery warranty and ‘Toyota Relax’ servicing-activated extended warranties offer a truckload of peace of mind. Try 10 years on the battery and a million kilometres (with 3year/60k on the rest of the car) if you get it checked at a dealer regularly.

Talking of warranties, there is a BIG issue which, at the time of writing is holding back deliveries of the bZ4x and currently there is no fix. The company stopped deliveries to customers before they'd even started because the wheel nuts could come loose. You'd think that might be an easy problem to put right, but it appears not - it has been several months already and there is no news.

When it does come back, Toyota’s first ever go at a pure electric car is not a game-changer, but there’s a lot of ability and subtle appeal in the bZ4x that takes care of the little hassles of running an electric car. It’s clever, competent and useful, and it should be on your ‘must try’ list if you’re in the market for this kind of car. Although the name is still a bit stupid.