Great to look at, fun to drive and featuring the luxurious interior that it always should have had, the F-Pace PHEV is very desirable, especially for company car drivers. It’s pricey though.

“The F-Pace is now back on the pace, with a tax (and fuel) efficient choice at last. The interior is finally up to scratch too. Its main problem will be rivals with are even more efficient such as the BMW X5 45e and all-electric models. These make even more sense if you are a company car driver.”

“Jaguar finally gets on the plug-wagon, and the F-Pace is a good place to start. Nearly 400bhp and 62mph in 5 seconds means it’s no joke - and up to 30 miles of EV only is great in towns.” 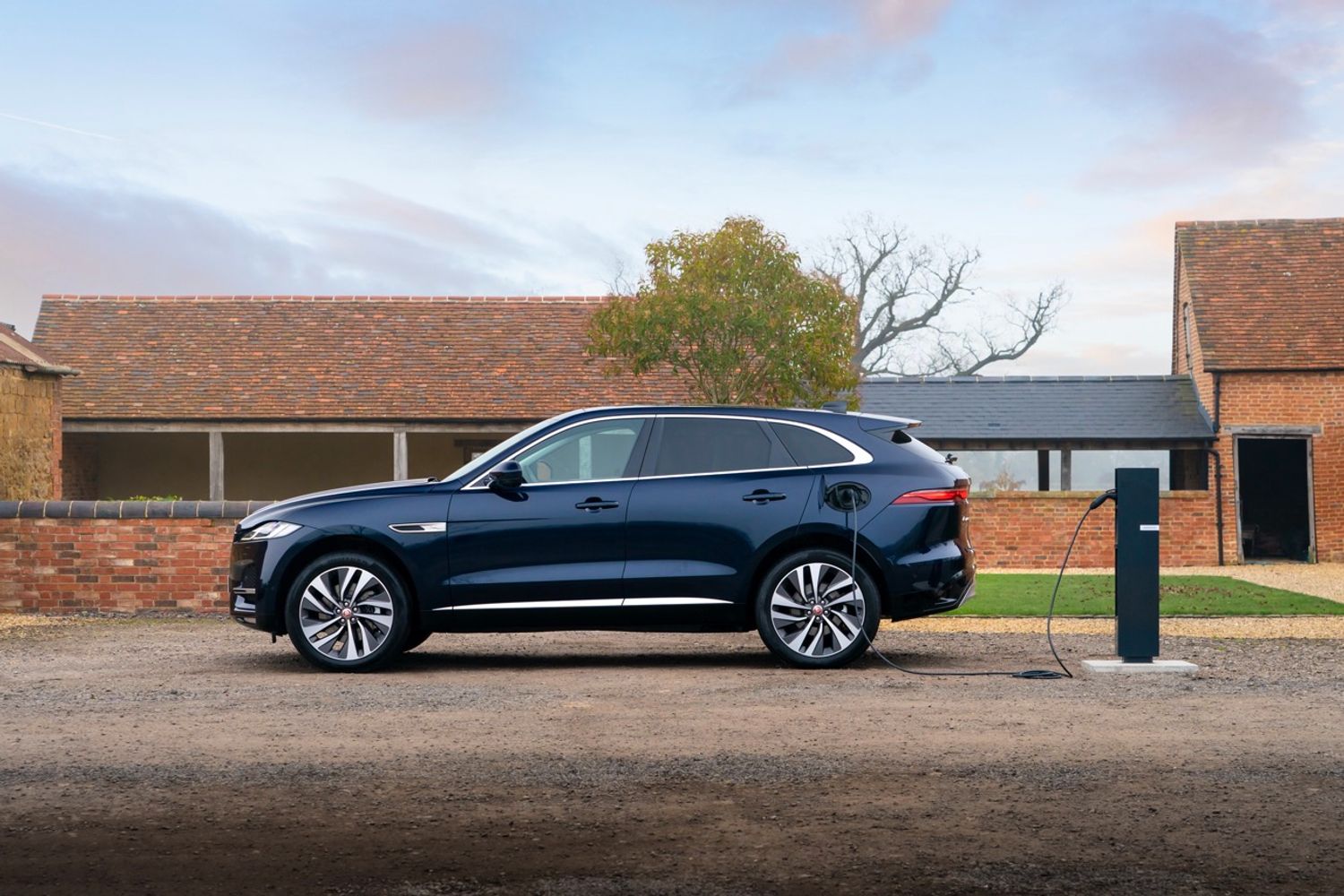 It took decades for Jaguar to finally release an SUV, finally accepting the fact that an executive carmaker simply had to have at least one in its range.

That was 2016 and only now has Jaguar got round to creating a plug-in version of its largest and first-ever SUV. Until now the F-Pace has seen all manner of petrol and diesel engines under its long, sweeping bonnet but never one that's partly powered by electricity.

Five years is a long time for a car to be on sale without getting a comprehensive make-over, but as make-overs go the F-Pace's is pretty substantial – new engines across the range, new technology and a completely brand new interior.

In fact, the car's styling receives only the slightest of changes – mainly focussed on a larger, more spangly grille, new LED headlights and rear lamps.

It's with this mid-life makeover Jaguar has finally added a plug-in hybrid version. Jaguar may have taken its time over electrifying the F-Pace but now the car, along with its also newly-electrified smaller brother E-Pace, have to spearhead the brand's new electric future, along with the 100% battery-powered I-Pace.

The F-Pace PHEV gets a P400e badge with that little 'e' signifying it's the leccy one. So it gets a 296bhp 2.0-litre turbo petrol engine up front, and sitting behind it lies a 141bhp electric motor with an eight-speed automatic gearbox attached to it.

At the back, under the boot floor, lies a 17.1kWh lithium-ion battery pack and the Jag is all-wheel drive with power sent down a prop shaft to the back axle. There are no clever electric motors driving the rear wheels here, it's just electric help going through the normal transmission.
Scores on the doors are a combined power output of 398bhp, up to 33 miles of pure-electric range and CO2 emissions of 49g/km – a figure that'll please company car drivers.

It's a quick car – 0-60mph takes just five seconds meaning the P400e is the quickest in the F-Pace range (bar the bonkers V8-engined SVR) thanks to a hefty 640Nm of torque available from as little as 1,500rpm, and that all-wheel drive system.

The engine and the motor work well together giving an impressive punch – but mash your foot on the throttle too many times for outright acceleration thrills, and that 33 miles of EV range doesn't last long.

Truth is, you don't need to floor it to have a fun driving experience. The F-Pace has always been an enjoyable car to drive quickly thanks to a well-balanced, agile chassis and direct, accurate steering, and the same is true here. Even with an electric motor and other electrical gubbins, the P400e weighs an extra 174kg over the P250 2.0-litre petrol F-Pace, but you can barely feel it.

The steering has lost a little of its once famous precision, but there's an accuracy to the P400e that's missing in the equivalent BMW X3 xDrive30e and Mercedes GLC 300e. And even with massive 21-inch wheels fitted on our SE test car, the ride was super smooth.

The most impressive part of the driving experience is the quietness. Jaguar has added active noise cancellation technology this time around, so when you're driving in EV mode it's eerily quiet. You'll be driving around in EV mode quite a bit too as the F-Pace tends to favour electric running as much as possible.

There are three driving modes – EV, Hybrid and Save – and in the electric mode the Jag does get through the 33-mile range pretty quickly. Save is a good mode if you need electric power later on in your journey, but that said there's more than enough electric range for most people's commutes and small local journeys.

Topping up the 17.1kWh battery pack takes 1 hour 40 minutes from a 7kW home wallbox or a zero-to-80% top-up takes 30 minutes on a DC fast charger – the Jag is unusual for a PHEV to have fast-charging capability.

You could always call the old F-Pace a fun car to drive but it was a struggle to call it a luxurious one. The interior design and quality and the features it had could never trouble BMW, Audi or Mercedes, but that's not the case anymore.

Jaguar has completely ripped out the old car's interior and replaced it one brimming with quality materials and gorgeous levels of attention to detail. The interior bristles with real leather, wood and metal detailing, and the seats even wear the Range Rover's headrests – it's seriously plush.

There's a much-needed tech upgrade too with a new digital display in front of the driver and an 11.4-inch curved glass HD touchscreen with Jaguar's latest PiviPro infotainment system. The new system has a smarter, more premium look and is easier to use than before although it's not as quick to cycle through or load menus as BMW's iDrive.

Every P400e gets the twin-screen set-up; in fact, Jaguar hasn’t scrimped on the spec. Basic S models, from £55,910, get 19-inch wheels, a powered tailgate, 12-way electric heated front seats and LED headlights and the range rises to £64,585 for the sportier-looking R-Dynamic HSE.

The Jag does look expensive compared to the X3 and GLC plug-in hybrids, though – the Mercedes in particular as that tops out at £54,765 for the range-topping Premium Plus model. More of an issue is that BIK rate though. At 11% it's competitive but the BMW X5 is only 7%, which means it will be cheaper to run as a company car even though it is more expensive to buy.

It's an impressive make-over, that's for sure. The F-Pace is still surprisingly fun to drive for such a large SUV, it's still practical and it's still very good looking. It's the car the F-Pace should always have been. We just hope it's not too late.

Own a Jaguar F-Pace PHEV or looking to buy? Tell us about your experience