The plug in hybrid version of the Defender is the most capable and arguably the best to drive. But there are compromises and it doesn't have the dramatic tax advantages of rivals.

“I love a big family SUV, and the Defender is the real deal rather than a wannabe with off-roader looks but no hardware to back it up. The towing capacity is lower but should still be enough for most people, but the lack of a seven seat option is a real shame.”

“Maximum capability and some measure of electric-only running? Yup, the plug-in Defender manages. But the tax breaks mean some other SUV PHEVs make more sense. I’m not sure I care, because I like the Defender. But you might.” 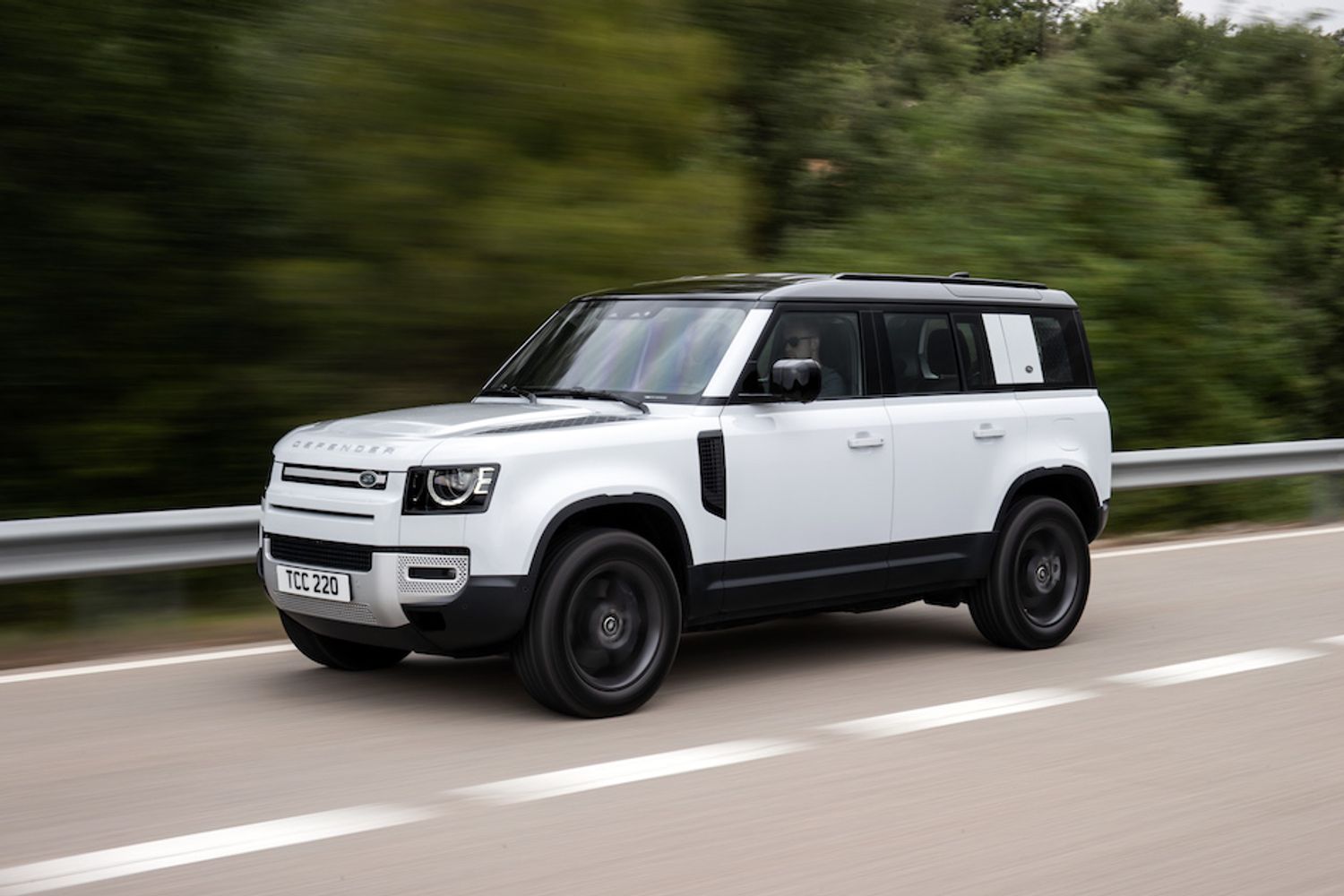 There is a theory that the Land Rover Defender is one of the ‘greenest’ cars in the world. This might be difficult to believe when you are stuck behind a 30 year old diesel as it drags a trailer full of sheep up a hill, trailing sooty exhaust fumes. But the fact it is still going after 30 years is testament to the sustainability of ‘make do and mend’ rather than scrapping cars every 15 years and using resources and energy to make a new car.

This new Defender PHEV is designed to make the drastically reduce the sooty fumes part of Defender ownership, although you’ll have to ask your children to check back in 30 years to see if its subsequent owners have made do and mended.

As you may have guessed, this new Defender P400e is powered by a plug-in hybrid powertrain that combines a petrol engine with an electric motor and battery. It might only have a weedy-sounding 2-litre engine but the addition of the electric motor makes the P400e really quite powerful, with a total of 399bhp which is enough for a distinctly sportscar-like 5.4 second 0-60 time. That’s faster than a 5-litre, V12 Ferrari Testarossa – a car which was on teenagers’ bedroom walls in the 1980s and considered to be the pinnacle of performance.

But the combination also means it has the potential to be economical with official figures of 83mpg and 74g/km of CO2, bringing useful – but not exceptional - tax savings. If you plug it in, the Defender will also be capable of up to 27 miles in pure EV mode.

This makes it the most frugal Defender ever, and also one of the fastest. It certainly feels quick on the road too, with a perkiness when pulling away which even the new V8 version can’t match. For off-road antics and towing the instantly-available pulling power of the electric motors makes sense too, although it’s worth noting that the trailer-tugging capacity of the PHEV is 3,000kg, 720kg down on the conventionally-engined models.

There is another drawback to going PHEV too –the luggage capacity shrinks by 119 litres (about the size of a medium suitcase) to make way for the 19.2kWh battery. It looks like someone is trying to hide a few paving slabs under the boot carpet and means you can’t have a rear row of seats.

That big battery also dictates that it takes surprisingly long to charge. Rely on a three-pin and it’ll be seven hours. A home wallbox will take around three. But unusually for a PHEV, the P400e has the ability to be rapid charged at a DC unit, cutting the time to top up to 80% to 30 minutes. Although you might not be popular if there’s a queue of pure EV drivers waiting, that electric power will make a real difference to the economy.

In fact, it is easy to swan around in pure EV mode if the mood takes you and you know your next charger is not too far away. The sight of a Defender gliding noiselessly past causes a few confused double-takes from pedestrians. The only time you really notice the missing help of the petrol engine is when accelerating up to higher speeds or climbing hills.

Choose the smart mode and the car will choose the best combination of plug-in and petrol power. It does it well too, with seamless blurring between the powertrains and only a faint, almost sporty engine note when the engine kicks in to help.

The brakes too are well judged, with none of the odd feel which can blight some electrified cars as they try and work out how to switch from using regen electric braking to bringing the old-fashioned pads into play to slow the car.

The overall feel of the new Defender is a little bit on the sporty side, which will come as a surprise to anyone used to the laid back, relaxed feel of a Discovery 4 or full-size Range Rover.

One big bugbears of the Defender – for us at least - is the Pivi Pro infotainment system. It was meant to be Land Rover’s answer to the high-tech set-ups fitted to rivals, but it’s still not good enough, with laggy responses and overly-complex menus. It now controls the drive modes too, which makes it particularly tricky to use on the move as the icons disappear before you’ve had a chance to press them.

The reason most driver will choose any new PHEV over a petrol or diesel equivalent will be down to the company car tax benefits. This is where the Defender P400e gets interesting, but the news isn’t quite as good as you might hope.

The figures show that a P400e attracts a rate of 20% benefit-in-kind, compared to a whopping 38% for the petrol and diesel models. However, the list price of the PHEV is higher, meaning you’re paying a smaller percentage of a much higher amount. The saving for a 40% tax payer is around £3,400 a year on the cheapest plug-in Defender versus its equivalent diesel, which is certainly not to be sniffed at. But a BMW X5 PHEV company car driver will pay £2,785 less per year than the Defender P400e user as it is more efficient and taxed at just 8%.

If you want the hard-working capability of a Defender with the minimal tax bill, the best option for your pocket – if not the planet – would be to go for the diesel-powered commercial version. If you can make do without the rear seats, it will cost just £1,400 a year in company car tax.

All these points may make you think that we don’t like the Defender P400e. That’s not true – it is probably the best powertrain fitted to this car in terms of driving performance and efficiency. We love the idea of a Land Rover that can be driven on the average journey with no exhaust emissions too.

But the tax advantages might not make up for the compromises in people carrying and towing capacity which come as a result of the battery installation. And these could be crucial reasons to choose a Defender over more efficient rivals.It means that this Defender is hugely desirable and we want to love it, but find it difficult to recommend unequivocally.