Mazda wasn’t first to the electric car party with its MX-30, and now it has launched a plug-in hybrid SUV that arrives a little later than other carmakers’. It’s an interesting, fun to drive SUV that’s well made and feels plush but the company car tax level is nothing special.

“I can't believe Mazda's engineers couldn't find some way to get an extra mile of electric range in order to slip under the BIK barriers. At 12% it's just not competitive - Range Rover PHEV drivers will pay less in tax every year than the CX-60 driver.”

“The near-miss on the BIK rate means the CX-60 doesn't make so much sense as a company car, but for private buyers its lower purchase price and lease costs make it an interesting alternative to premium brand. ” 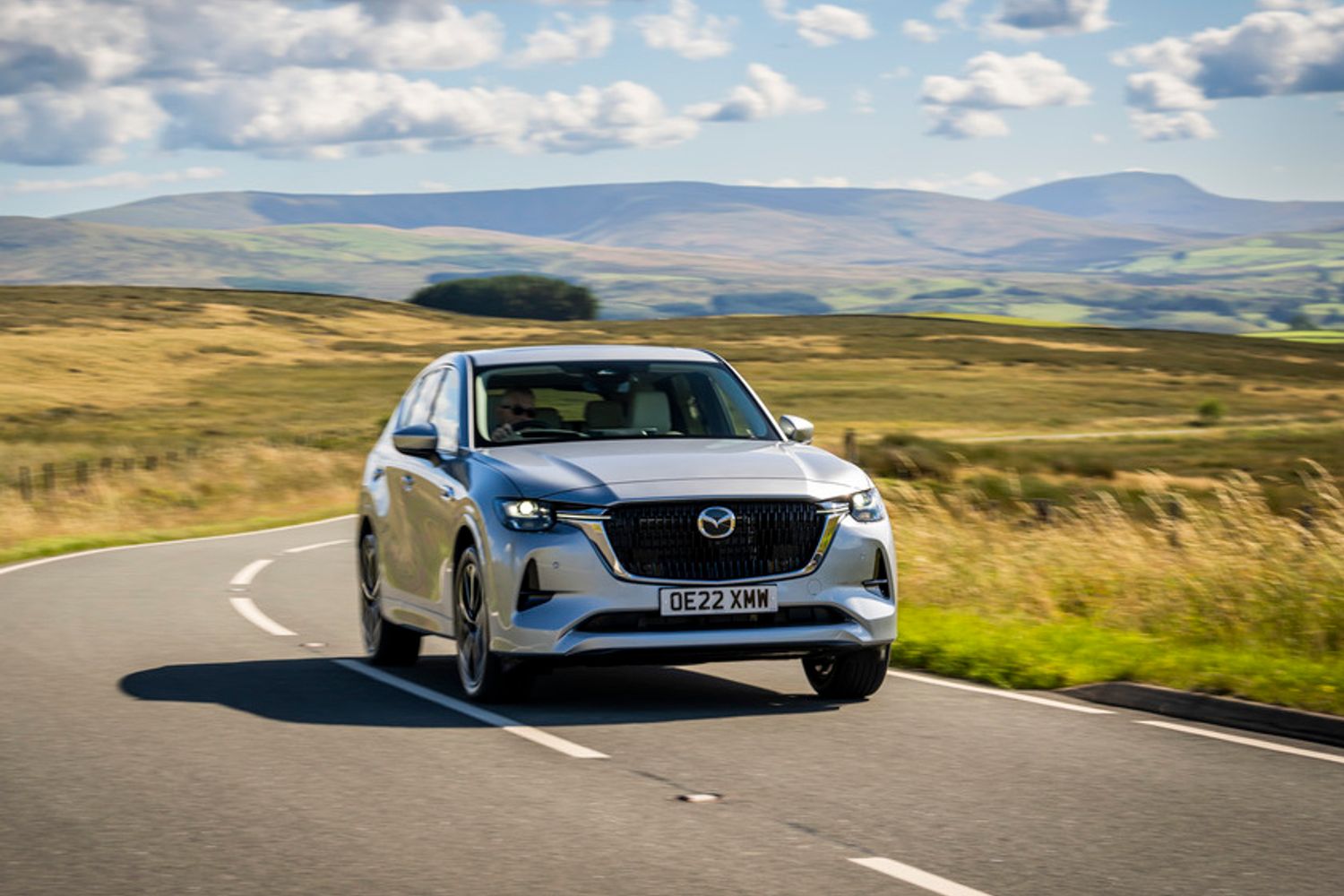 Plug-in hybrids aren't anything new but try telling Mazda that. The Japanese carmaker, famed for its fanatical attention to detail and sporting models, has already embraced pure-electric vehicles with its MX-30, but now it's turned its hand to plug-in hybrids. Better late than never, as they say.

Not only is the CX-60 Mazda's first PHEV, but it's also the brand's new range-topping model and a car that's designed to give the first whiff of Mazda's aim to be considered an alternative to BMW and Mercedes – something Mazda believes it'll achieve by 2030. So the CX-60 is rather a big deal.

The CX-60 is designed to tempt drivers of premium German cars away from their BMW X3s and Mercedes GLCs, while at the same time appeal to leagues of more rational customers who have perhaps owned or at least considered a Mazda in the past. As such, the CX-60 rivals everything from a Toyota RAV-4 PHEV right up to a Volvo XC60 Recharge, an Audi Q5 TFSI-e, a BMW X3 30e and the new Lexus NX 450h+.

Sitting above the CX-5 in Mazda's range, the CX-60 gets a suitably larger set of clothes. The styling is bluffer than the CX-5’s, but it looks rather handsome with minimal glitz adoring the simple lines. There's even a whiff of Jaguar F-Pace with the large grille, long bonnet and stubby rear-end.

Under that rather lengthy bonnet lies one of Mazda's 2.5-litre four-cylinder petrol engines. On the back axle sits a 134bhp electric motor, meaning that in total the CX-60 pushes out 323bhp making it the most powerful production car Mazda has ever produced – yes, really. Consequently, the 0-62mph dash is completed in a speedy 5.8 seconds; thankfully four-wheel drive comes as standard meaning that power is put down on the road with minimal fuss.

The electric motor is powered by a 17.8kWh battery giving a pure-electric range of 39 miles, while charging the battery can be done via a Type 2 cable, taking two hours 20 minutes from an 11kW charger. You can also save the battery’s charge or let the petrol engine charge up the battery on the move if you wish. A few years ago that 39-mile EV figure would have been class leading, but the Lexus NX 450h+ and Volvo XC60 Recharge both beat it (42 and 46 miles respectively). Still, the CX-60 can cover nine more miles than the BMW X3 and, let's face it, 39 miles is more than good enough for the typical daily commute.

Company car drivers will wince at this point, though, because if Mazda had managed to coax just one more mile of pure-electric range from the CX-60, it would have fallen into the 8% BiK tax rating and not the 12% it actually does sit in. That means the Mazda will be costlier than the Lexus and Volvo for business users to the tune of around £400 per year; never has one mile of electric seemed so important.

The Mazda is chunk cheaper than its premium rivals though, which isn't enough to make a difference for company car drivers, but will attract private buyers. Prices kick off at £45,420 and even the entry-level car comes with black leather upholstery, heated front seats and steering wheel, an electric tailgate and a head-up display. The range-topping Takumi version is the model Mazda is really trying to tempt BMW and Volvo drivers with.

Mazda's marketing bumf says it has an interior that's brimming with Japanese craftsmanship, and while that sounds a tad pompous, it's true. The Takumi gets delicious hand-stitching on the dashboard, gorgeous real wood and metal inlays, and it has the look and feel that far exceeds anything from Germany. If that's not tempting enough, a comparable BMW X3 30e M Sport costs £6,000 more.

Aside from the well-made interior – which feels just as sturdy in models other than the Takumi, by the way – there's a decent haul of tech including, on mid-spec Homura versions, a Driver Personalisation System that uses face recognition to adjust the seat and steering wheel to the driver's preferred settings.

The digital dials are clear and easy to read, and the large 12.3-inch infotainment screen is operated with a large rotary wheel on the centre console. This, and the row of knobs and buttons for the climate control, make the CX-60 far more relaxing to drive than the XC60, for example, where the majority of the car's functions have to be tweaked via the touchscreen.

Elsewhere, you might be surprised to know that despite the CX-60's rather large bodystyle, it's a five-seater and not a seven-seater. That does free up boot space, though, which stands at 570 litres (1,726 litres with the seats down) which is better than all of the CX-60's premium competition.

Not only has the Mazda got price on its side and an interior to rival the plushest of German SUVs, but there's also the way the CX-60 gets down the road. Despite becoming Mazda's heaviest model, tipping the scales at two tonnes and having rather corpulent dimensions, engineers have clearly been busy making the car feel typically Mazda. The steering is well-weighted and has a precision that is often lacking in an SUV of this size, and the whole car feels surprisingly agile.

Probably the CX-60’s best handling attribute is how flat it corners – there’s precious little body roll through twisting bends. The downside to having excellent body control, though, is a stiff ride. While the CX-60’s ride is by no means uncomfortable, it doesn’t have quite the polish and smoothness you’d find in the BMW X3 30e, feeling a little too pattery.

Refinement could be a little better too. The larger 20-inch wheels kick up a fair bit of road noise, and both the engine and electric motor could be quieter. The 2.5-litre unit is a little on the rough side under hard acceleration, and the gearbox and electric motor have the odd quirk of allowing gear changes to be heard and felt while the car is running in EV mode; in most PHEVs, acceleration is uninterrupted by the gearbox shifting ratios. But, really, the CX-60’s fun to drive character outweighs its refinement flaws.

If feeling pampered while being thrilled when driving are your top priorities with a plug-in hybrid SUV, the CX-60 delivers this and is very worthy of consideration. Company car drivers will have to do their sums carefully, though, but if the CX-60 is a sign of future Mazdas, it's an exciting future.