Confused about which Audi e-tron is which? Well the Q4 is the one us normal folk might feasibly buy: well priced and spacious, it should slot into family life very easily. A strong effort.

“​The Audi takes all the best bits of its Volkswagen ID.4 stablemate and adds the sort of premium feel that you'd expect from the brand. You have to pay for it of course but the Q4 really does feel a notch up in terms of cabin quality and overall feel.”

“Everyone seems to love an Audi SUV and the roads are full of them. The Q4 has the looks everyone craves but has more space than the biggest Q7 in a much more compact package. And of course it has the running costs of an electric car too. Brilliant!” 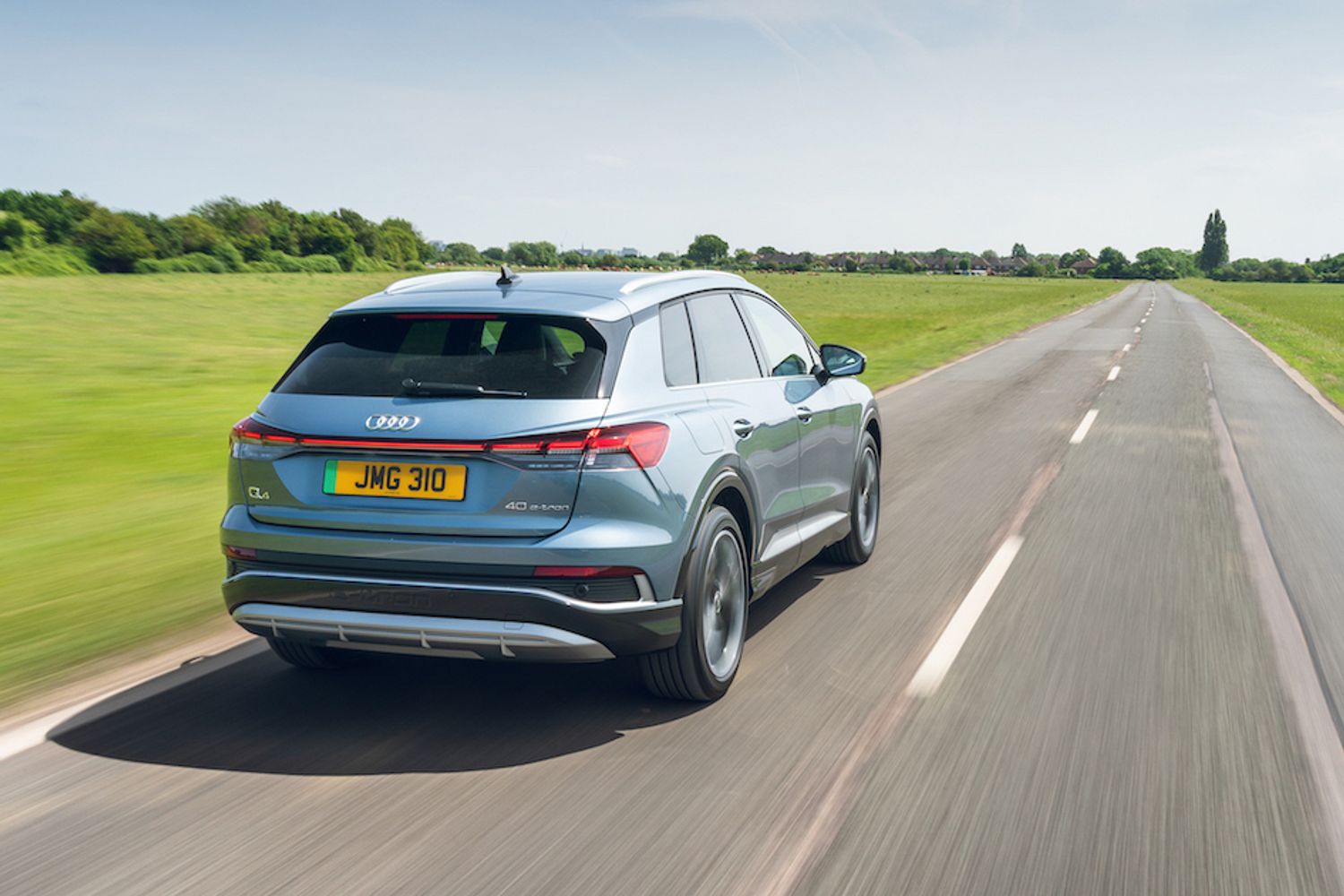 The Audi e-tron SUV, launched in 2019, was the first pure-electric car the firm had ever made, and while it’s a steady seller it was essentially a quick fix to get Audi into the world of electric cars, and consequently had compromises. Then there’s the e-tron GT – slick and stylish but an image booster rather than a car you'd expect to see on every street. And now we have the Q4 e-tron. This is the car Audi expects to be a big seller.

The Q4 e-tron is another one of those cars that shares the bits you can’t see with other electric cars. It’s actually a cousin of the Volkswagen ID.4 and Skoda Enyaq iV except more Audified – if you know what we mean.

So there’s the same short front overhang and bonnet as the VW and Skoda, but with its angular body, large grille (blanked off and which serves no purpose because of course there’s no engine lurking under the bonnet) and a pair of pretty grumpy looking day-running lights, it’s unmistakably an Audi. And in the German carmaker’s typical style, a swoopier, more-coupe-looking Sportback model is also available.

Just like the Skoda Enyaq and, yes, you guessed it, the Volkswagen ID.4, the bespoke electric platform which is used for the Q4 e-tron and its siblings means space inside has been prioritised – in fact, there’s tonnes of it. There’s a large centre console, special bottle holders in the doors, a pretty massive 520-litre boot and rear legroom that’s on par with an Audi Q7 – that’s Audi’s largest SUV, remember. All of this in a car that’s relatively compact; it’s worth pointing out that in terms of size the Q4 does actually sit between the non-electric Q3 and Q5 SUVs.

Apart from the extra space on offer, there’s very little inside to denote this a pure-electric Audi, as the design and quality is pretty much as you’d expect from the firm. At least at first glance. There's no doubt it has more instant showroom appeal than the disappointingly cheap-feeling ID.3 and ID.4, but if you start to prod around the cabin in the lesser-touched areas you will find bits that feel more Polo than premium. A Mercedes EQA or BMW iX3 will feel more expensive.

Perhaps as a distraction to this, Audi has made the steering wheel square. It’s not quite as straight-edged as the wheel in an old 1970s Austin Allegro, but it’s not far off. It actually works well and feels better than it sounds.

There are three versions of the Q4 e-tron. The ‘35’ which comes with a 52kWh battery, around 170bhp sent to rear wheels (which is rare for an Audi) and should give a WLTP range of 208 miles in the most efficient spec.

Then there’s the ‘40’ which gets a 77kWh battery, 204bhp and should manage up to 316 miles on the WLTP cycle. At the top of the range is ‘50’ which gets the 77kWh battery but an extra motor on the front axle making it four-wheel drive and it gets just under 300bhp.

Trim levels, meanwhile, range from Sport and go through S line, and Edition 1. While it’s the entry-level model, a Sport comes with pretty much everything you’d need with features such as 19-inch alloys, LED front and rear lights, three-zone climate control (that means you and your passengers don't need to have arguments about the temperature), electric boot-lid, a 10.1-inch touchscreen with 3D mapping and Audi’s nifty digital dials (called Virtual Cockpit).

If you really need matrix headlights, sportier body styling and 20-inch wheels, upgrade to the posher Edition 1 trim. But beware - you'll lose a bit of range as it's less efficient. The Edition 1 has big-and-bling 20-inch wheels which sap energy and cut the range to just 292miles.

It’s not the fastest Audi, mostly because it has just over 200bhp and weighs two tonnes, but it’s composed, quiet (you can thank special sound-absorbing acoustic glazing for that) and easy to get along with. While it may share a lot of DNA with the Skoda Enyaq and VW ID.4, the Q4 e-tron drives differently to those cars with a sense of polish and refinement that you’d expect to find in a car wearing the four-rings badge.

The Q4 is the first of its siblings to arrive with four-wheel drive, with VW and Skoda deciding to launch all-wheel drive versions of their cars at a later date. The Audi really benefits from having quattro drive on damp roads, with clever electronics that move the power around to make cornering more stable. It even has something called variable dynamic weight distribution to help it deal with corners in a steady, reassuring style.

It’s a joy to drive on a stretch of twisty country road, where it really doesn’t feel like a hefty two-tonne beast. Even the square steering wheel almost feels normal.

There are the usual drive modes to select from – Comfort, Auto, Efficiency, Individual or Dynamic. Both Range and Efficiency boost efficiency by limiting the maximum speed, but there’s also a ‘B’ mode on the gear selector which boosts energy recuperation. You can play with the amount of regeneration by using the paddles on the steering wheel, but there’s no one-pedal driving option like you find in Nissan Leaf or a BMW i3, which is a shame.

The practical charging stuff is dealt with in an efficient Audi fashion, though it's not a stunning set of figures and is easily outclassed by cars like the Hyundai Ioniq 5 and BMW iX3. The 35 e-tron gets 100kw DC charging as standard, and the 40 gets 125kW. That means, according to Audi’s figures, taking the battery from 5 to 80% charge takes 38 minutes on a public DC rapid charger and the 77kWh battery should take around 12-13 hours to go from flat to full on a home wallbox.

It’s the same with the warranty – it’s a three-year/60,000 warranty which is fine but it seems a bit light compared to other electric car makers. Kia, for instance, offers a seven-year warranty on its e-Niro and the new EV6.

The Q4 e-tron isn’t by any means a game-changer, but it’s a brilliant, dependable offering from Audi, and will appeal to a big, broad cross-section of people who like the brand. This could be the electric best-seller Audi is looking for.