A neatly packaged seven-seater with all the usual Mercedes refinements. Premium quality but with a premium price tag.

“I quite like the honesty of the design and the facility to carry an extra two passengers is good - especially if you have kids with lots of mates. It’s disappointing that the cabin is compromised by the basic design of the car. Stepping into the EQB after driving flat-floor all-electric cars really feels like going back in time. ”

“Having the option of seven seats is great, and it’s good to see this kind of car now appearing on the electric car market. I wish it was a cheaper option because the petrol-engined car is around £34,000 and I’m disappointed that the rapid charging speed is on the low side. ” 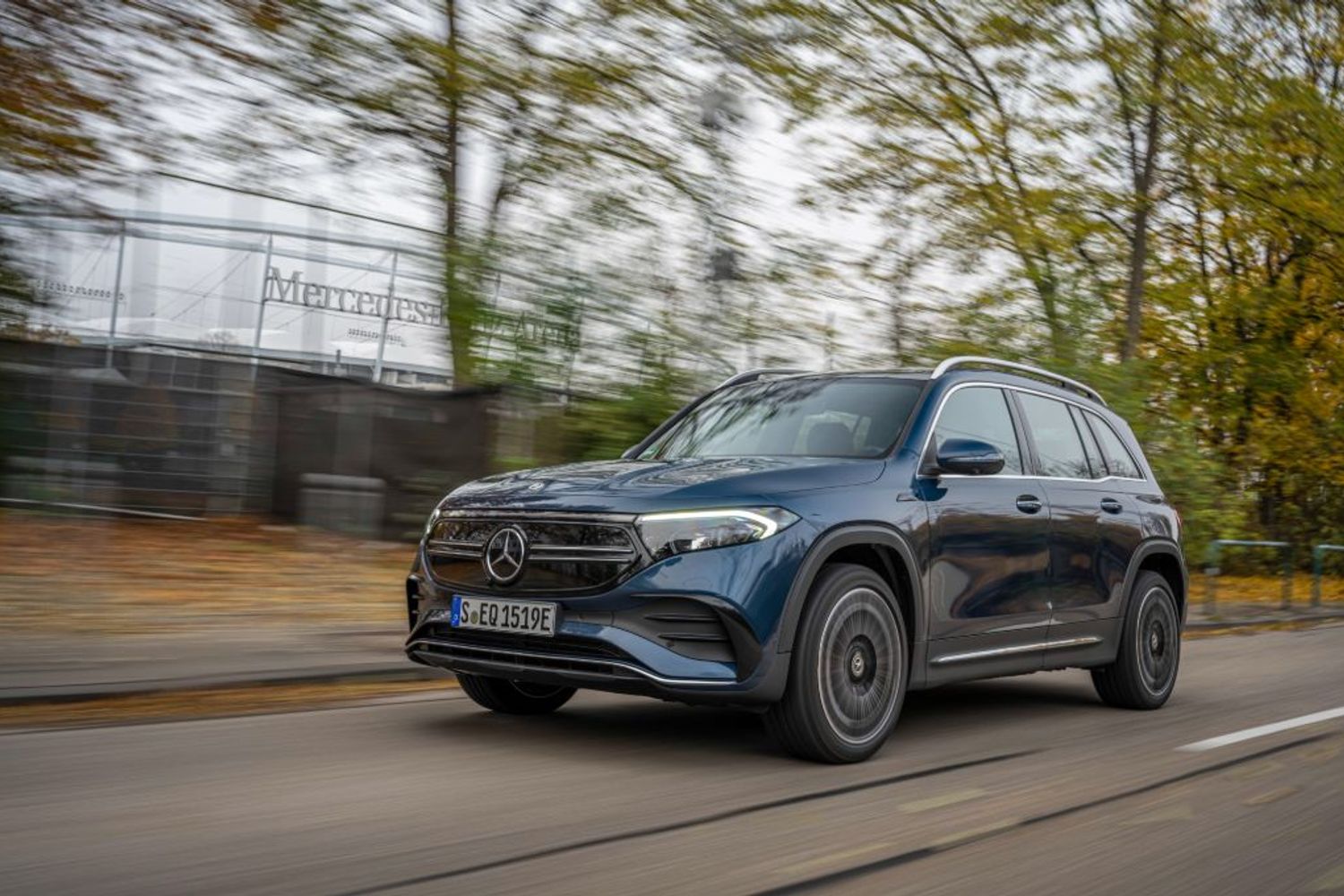 If you’re looking for an electric car that can carry more than five people then you won’t need us to tell you that options are pretty thin on the ground. In fact, unless you’re prepared to shell out for a used Tesla Model Xor are prepared to carry your family round in a van like the Citroen e-Berlingo or SpaceTourer, Vauxhall Vivaro-e or Merc’s own EQV, then you’re out of luck.

But there’s (some) good news on the horizon. Mercedes now offers its EQB - a funky seven-seater SUV that (unlike the Tesla) is out now.

The EQB is aimed at the small but significant number of buyers who want and need a third row of seats. Mercedes reckons that the kind of folk who would currently consider cars like the Renault Scenic or Volkswagen Tiguan Allspace to carry their tribe (or the occasional sixth or seventh passenger) are the target audience for the EQB.

In terms of design, the EQB is unashamedly an SUV. There’s no swooping roofline, letterbox windows or shoulder-high window line trying to blur the lines between hatch and SUV here. The EQB is a boxy, tell-it-like-it-is SUV that pulls no punches. Like all ‘EQ’ Mercedes models, it’s based on an internal combustion engine model – in this case the GLB – albeit with a different nose to give it some visual differentiation. To our eyes, it’s probably the neatest of Merc’s EQ models and is neatly proportioned.

Size-wise, the EQB measures 4,687mm long and 1,834mm wide. For reference, that’s 10cm longer than a Volkswagen ID.4 but fractionally narrower. Inside, however, the EQB doesn’t really make the most of its extra length. Because it’s based on a conventional piston-engined car, it comes with the same packaging compromises. A big engine bay means that valuable front space is lost while the requirement for a transmission and exhaust tunnel means that the floor is only flat in the footwells. By comparison, an ID.4 feels much more spacious.

But while the Mercedes offers less space, it does have a trick up its sleeve in the form of a pop-up third seating row as standard. The rearmost seat units are individual and are lifted and folded flat via a fabric loop at either edge.  The middle bench can be slid back and forth by around 30 cm to give those in the third row a bit more legroom, while the boot holds between 495 and 1,710 litres in the best case.

If you’re planning to wedge a couple of six-footers in the third row, then think again. While we can’t fault the operation of the seats, which fold neatly away when not needed, even Mercedes suggests that they are only really suitable for passengers under 1.65 metres. Kids will be fine, but if you’re looking to carry teens or young adults on a regular basis, then the EQB probably isn’t the car for you.

The car launches with two, rather well specced all-wheel drive models, the EQB 300 and EQB 350, with prices kicking off at just over £55,000. A front-wheel drive entry level model will join the range at a later date and may become our immediate first choice when it does.

Both launch models come with a 66.5kWh battery (usable) and rapid charging speeds of up to 100kW. The latter figure is somewhat surprising given the general industry trend towards much faster charging capacities. That said, both EQB models will charge to 80% in around 35 minutes on a 150kW charger or quicker. What’s more, Mercedes has hinted that the DC figure may be higher once deliveries start. If you’re plugging in at home on a standard 7kW wallbox, both models will fully charge from empty in just over eight hours.

As with other Mercedes EQ models, the EQB has some seriously clever range-extending features. The regen system is one of the best we’ve experienced while the ‘Electric Intelligence’ navigation system pre-prepares the battery pack for charging. As a result, the EQB can take full power at every stop.

In terms of range, both models have an official WLTP range of 253 miles, which seems par for the course given the weight of the car. We’d expect that to translate to around 220 miles in real-world conditions. As with the charging speed, those figures are okay but not exactly class leading by any means.

Neither version could be described as being particularly engaging to drive (the fastest is the EQB with a 0-62mph time of 6.2 seconds), but both models have good mid-range pulling power and are refined and comfortable at speed. Sound insulation is, as we’ve come to expect from Mercedes, incredibly good while the ride is surprisingly compliant given the weight and large wheels.

The EQB sits between the current EQA and EQC models – no surprises there – with prices starting at £53,610 and rising to £58,110 if you’ve gone for the biggest spec and the most powerful motors. If that sounds a little too expensive but still need to carry seven passengers, Mercedes has confirmed that a new seven-seater based on the next generation Citan van will soon be launched with the EQT tag, trading glamour for value in the process.