The Cross Turismo will appeal to those who want the Taycan saloon's performance but need greater practicality. The SUV styling additions might not appeal to everyone though.

“The Taycan is one of my all time favourite cars. It is brutally fast and yet comfortable and easy to live with. My only real criticism was that it's a saloon and therefore not very practical. The Cross Turismo solves that problem too.”

“I love everything about the Taycan, and not just because it's fast. The technology underneath that sleek body really does move the game on in terms of charging speeds and efficiency. The Cross Turismo adds practicality too - but I'm not sure the SUV-alike cladding is really needed.” 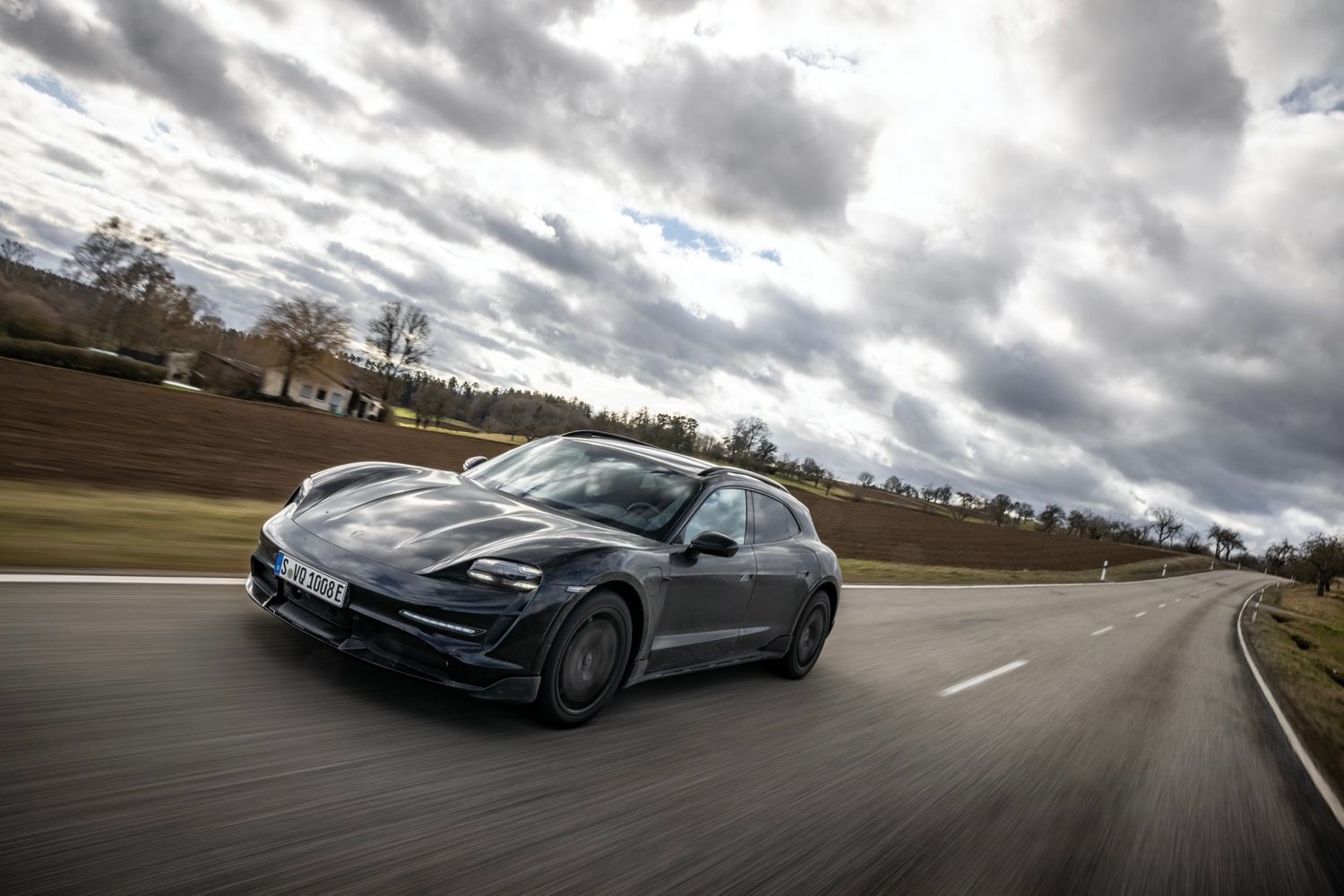 After shocking the electric world by showing EVs can be thrilling to drive, Porsche is following up its Taycan superstar with another, albeit wearing slightly different clothes. The Taycan Cross Turismo is essentially an estate version of the Taycan with a higher ride height, but you'll find Porsche calling it a CUV – or cross utility vehicle.

Either way, it's a more practical version of the brand's first all-electric car with a longer roofline, roof bars, more space in the back seats and a larger boot. And, as SUVs are all the rage, the Cross Turismo has a slight off-roader look too, with underbody protection, wheelarch cladding and a ride height raised by 20mm.

More pragmatic it may be but it cuts a more elegant shape than the Tesla Model X and, just like the Taycan saloon, is far more sporting to drive than the Audi e-tron and Mercedes EQC.

Porsche invited us to have a look at the car and drive a still-disguised prototype to give us an idea of how the car drives. Is it more sport than utility vehicle?

But before we get behind the wheel, we took a close look at the bit of the Taycan which has changed most - the back. While there is more space, up front there's hardly any difference between the saloon and the Cross Turismo. With the car riding just 20mm higher than the standard Taycan and no change in the seating position, there isn't the lofty view out like you'd find in the EQC or the Porsche Cayenne e-Hybrid PHEV.

The only change is another driving mode on the centre console – 'Gravel' reprograms the traction control and four-wheel drive systems for better grip on slippery and uneven surfaces. For those who need a little more ability on the rough stuff, an off-road package will be offered which, among other things, raises the standard air suspension another 30mm.

Our test car was the Turbo S with its 93.4kWh 'Performance Battery Plus' (useable battery capacity is 83.7kWh) pushing out a frankly unbelievable 757bhp. But, like the Taycan saloon, there's a selection of models. The range kicks off with the 4 Cross Turismo with a still more-than-respectable 470bhp (when overboost is engaged), and it gets the same 93.4kWh battery and it covers the 0-62mph sprint in 5.1 seconds rather than 2.9 seconds with the Turbo S.

As for range, the entry level 4 model delivers a claimed 241-283 miles of range, while the 4S and Turbo versions can manage between 241 and 281 miles. The top spec Turbo S is more about performance than range, but that said it can still cover a claimed 241 to 260 miles before needing to be topped up. Certainly, in our experience there are few cars which are faster on the road - or at the charge point. The Cross Turismo gets the saloon's 800-volt electrical system, which means topping up the batteries is far quicker than rivals, including the Tesla Model X.

Even though it was still wearing the dirt from the engineers' test drives, our car drove as impressively as the standard Taycan. Even with the slightly higher ride height, the Cross Turismo corners flatly and its sharp handling bellies its 2.3-tonne weight.

It's on sale now with prices starting at £81,500 and rising to £140,360, so around £4,000 more than the saloon. On paper it sits in a class of one, but with its more spacious interior and SUV-like looks, it will likely tempt a few Jaguar I-Pace and Tesla Model X owners. We'll deliver a fuller first drive verdict in a few months time, but on this early test drive it's clear Porsche has another success on its hands.