“To sit in, look at and drive, the new Toyota Mirai is a total revolution compared to its rather awkward looking predecessor. It feels much more Lexus than Toyota in its finish and is outstandingly refined too. The price is getting nearer to comparable EVs too.”

“The new Mirai is a vast improvement in every way over the old car. But the shortage of hydrogen filling stations make it compromised to live with. It's set to remain little more than an experiment for now, but proves that fuel cells have a future.” 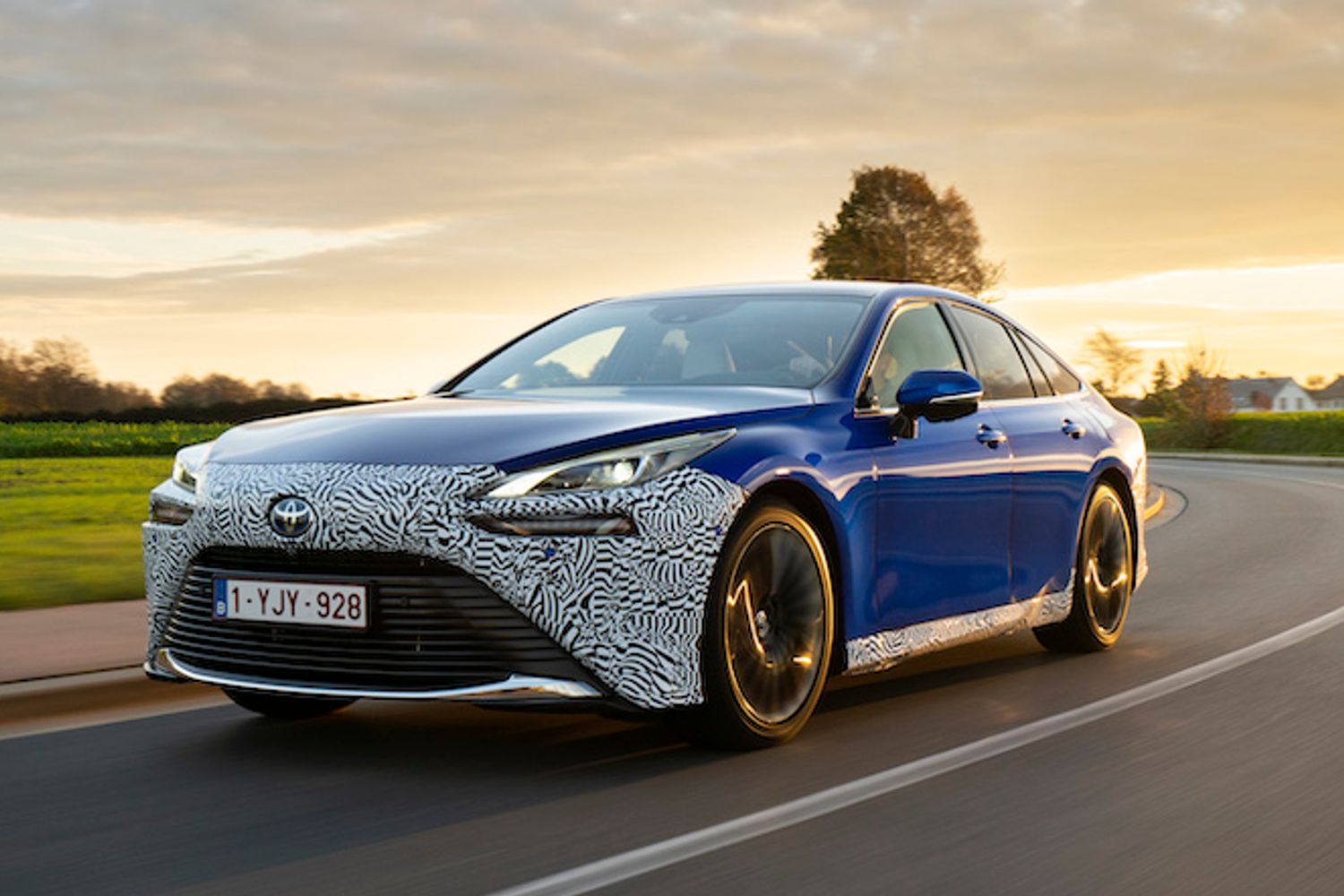 You may not have heard of the Toyota Mirai, despite this new car being the second generation. The Mirai is Toyota’s hydrogen-fuelled car. It’s powered by a fuel cell stack that sits beneath the bonnet, but don’t forget that hydrogen cars are still electric cars. In simple terms, those fuel cells suck up hydrogen from the three tanks in the Mirai, mix it with plain old fresh air, and the chemical reaction produces electricity that powers an electric motor. The only tailpipe emission is a trickle of water.

There's a great deal of debate about whether fuel cell cars are really the future of motoring. Is it the way forward, or a dead end? Toyota invited us to drive a prototype of the new Mirai to find out.

In the Mirai, the electric motor has 180bhp and powers the rear wheels. That power output in a car of this size is a little underwhelming - it's about the same as a 2-litre petrol engine. The new Mirai is a bit longer than a BMW 5 Series and a little shorter than a 7 Series, and is set to cost some £65,000 or more (although prices are yet to be confirmed) so it needs to really prove a luxury point to go with the luxury price tag.

While the Mirai is more than gutsy enough to feel comfortable even in a fast motorway merge or cheeky exit into busy traffic, ultimately the 0-62mph time of 9.2sec shows that it is rather sedate by the standards of its peers, whether they be powered by petrol or electricity.  It's not helped by a hefty weight. The Mirai tips the scales at 1,950kg; that's about 200kg more than a BMW 530e and only about 150kg less than a Tesla Model S.

The performance is the only area where the Mirai doesn’t feel like a luxury car though. In fact, in terms of refinement this is one of the best cars on the road. There’s a bare hint of noise from the electric motor and nothing at all from the fuel cells. You’re left with only distant wind and tyre hum, but even this is muted, even by the high standards of this limo class of car.

The light steering is precise and predictable, while the Mirai smooths over bumps and creases in the road. It's all the more enjoyable from the fat, armchair like seats that give a fine view of the widescreen infotainment screen. You even get Apple CarPlay and Android Auto to override the fiddly native Toyota nav software.

There’s masses of room to lounge about in comfort for rear passengers, so the big Toyota really does feel at home even against high-brow alternatives.

Putting its futuristic fuel aside for a moment, then, the Mirai is so comfortable, hushed and vibration free that it’s almost spa-like to drive.

But there are drawbacks to hydrogen power. Number one is the shortage of fuelling stations as there are only a handful of hydrogen pumps scattered across the country. Even though hydrogen cars have the huge benefit of being able to fill up almost as quickly as a petrol or diesel car and offer a similar range to each brimmed tank, such is the rarity of the filling stations that being able to refuel will still be a defining and extremely restrictive part of ownership. It’s what will stop most people from buying hydrogen right now.

Well, that and the price. After all, the Mirai might be deliciously luxurious to drive in a stately kind of way, but you can get a Tesla Model 3 or a hybrid BMW 5-Series for less.

In truth, Toyota knows this. The Mirai isn’t expected to be a big seller in the UK or Europe, and you’re not going to be able to walk into a dealership and buy one like you could any other Toyota. The purpose of the Mirai is to showcase the fuel cell tech, in order to promote uptake of hydrogen. And Toyota’s very serious about hydrogen fuel cell production in the long term, too. The new Mirai’s fuel cells are smaller, more efficient and cheaper to produce than before, so Toyota can now punch out a fuel stack in a matter of moments, and already has the potential to do that 30,000 times per year.

So, would we recommend the Mirai to the average consumer? No, not at all. With pricing and payment options still to be confirmed, it may well be that Toyota doesn’t even offer it to private buyers. It may only be available as a leasing prospect to corporate customers – which will allow Toyota some control over how the car will be used.

Yet, as a showcase for new powertrain technology that’s likely to become a huge part of our transport infrastructure – probably in heavy goods vehicles and buses before normal passenger cars – the Mirai really does make the point exceptionally well.