No longer a van based big MPV, the new Multivan eHybrid is bigger, more comfortable and comes with a plug.

“This looks like a great effort from Volkswagen. The old Caravelle had an upmarket feel this is a step up from that. It’s a shame that the hybrid system isn’t more electric-focused given the space available, but this is a welcome addition and great for bigger families.”

“With the old MPV now out of favour with carmakers, it’s good to see Volkswagen offering something huge with the option of a hybrid system. If I had to cover big distances on a regular basis, I reckon this would be a decent solution. Plus, it comes in orange, which is always a bonus. ” 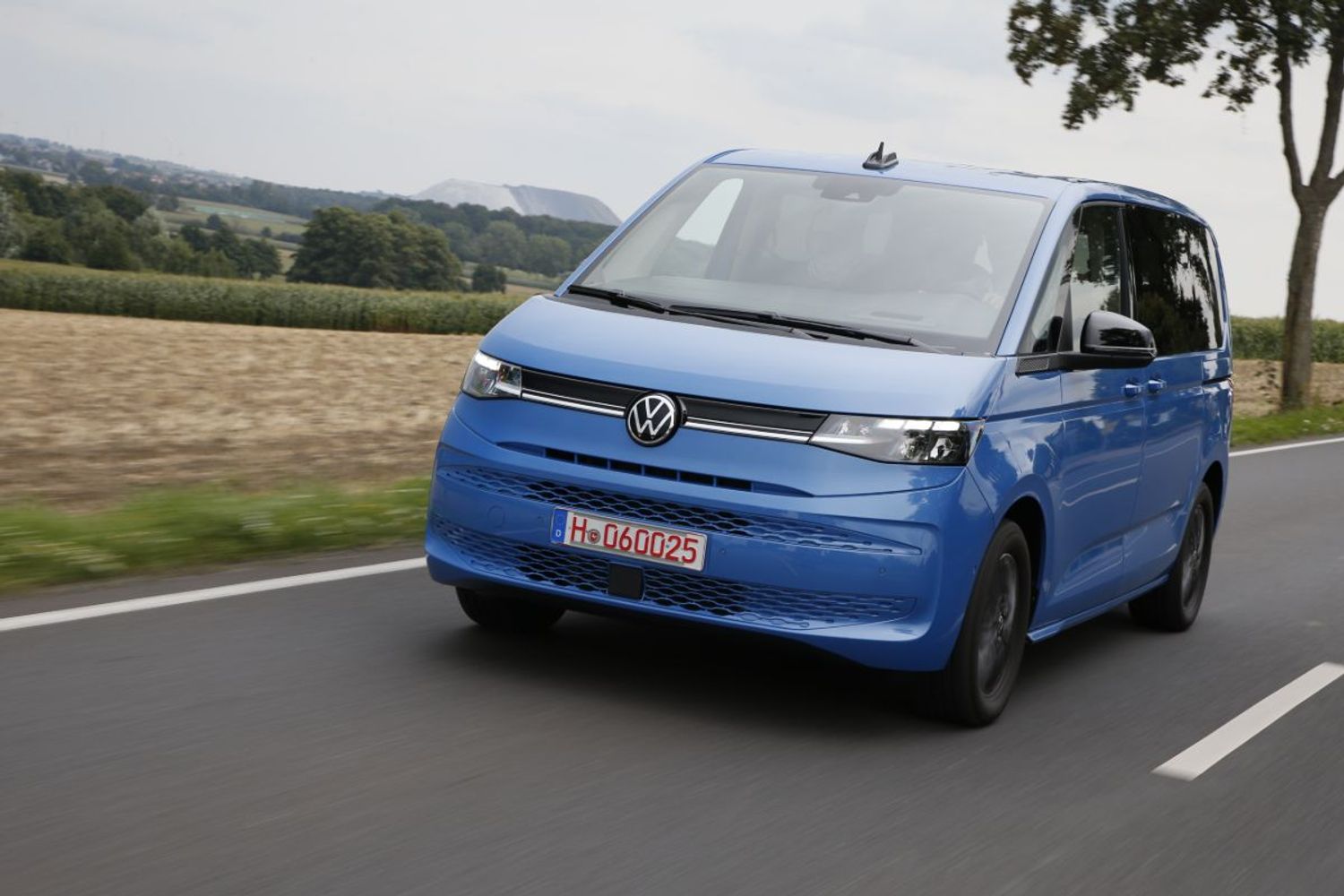 The iconic Volkswagen bus has been driving trade, crafts and commerce for almost 75 years. But in recent years what was once intended as a simple load-carrying brother of the Beetle has carved itself a new niche as a posh MPV for big families and companies looking to carry a lot of people in luxury.

2022 will see a new version roll into the UK in for the form of the new Multivan. Confusingly, that’s the name Volkswagen used to call its people-carrying van a few years ago before it adopted the name Caravelle. Now we’re back to Multivan for reasons unknown. It’ll probably be Caravelle next time around, so don’t ditch your CR4VLE personalised number plate just yet.

The reason why you’re reading about the new Multivan here is because, in addition to gaining a new name, it has also acquired a plug. Although Volkswagen semi-officially offers an all-electric Transporter through its approved engineering partner ABT, the Multivan eHybrid is the first factory-built Volkswagen Commercial Vehicle with the ability to run on electric.

Let’s deal with the important stuff first. Where the previous Caravelle was, effectively, a Volkswagen Transporter van with its insides filled with carpets and seats, the Multivan is based on the same foundations as the brand’s passenger cars. The reasons for this are a little complex, but essentially by shifting away from a van base, Volkswagen has been able to pack in more of the luxuries and technologies found in its premium road cars. It also allows for the installation of a plug-in hybrid system which is why we’re here.

On the upside, the switch to a new set of underpinnings means that the Multivan is around 200kg lighter than the outgoing Caravelle. Volkswagen also claims that there is more space for passengers and more kit as standard.

On the downside, prices have gone up by around 15 percent. What’s more, the Multivan’s appeal may take a big hit when Volkswagen finally releases its retro-styled ID. Buzz all-electric van later next year.

In terms of size, the Mutivan is 70mm longer than its Caravelle predecessor at 4,970mm while the wheelbase has increased by 120mm to 3,120mm. It’s also 40mm wider at 1,941mm. Under the clean and crisp exterior of the new Multivan eHybrid sits an engine, battery and electric motor taken directly from the Golf GTE plug-in hybrid. The petrol engine element is a four-cylinder 1.4-litre unit while the 13kWh battery pack drives a 114bhp electric motor. Combined, the two units have a system output of 216bhp and torque of 350 Nm.

Despite the obvious size difference between the Golf and the Multivan, the hybrid system copes remarkably well and never feels underpowered. It will happily run in all-electric mode up to 60mph and the range of around 30 miles is modest, some owners with small commutes will be able to run in electric mode for the majority of their journeys.

Like the Golf GTE, the Multivan can be charged from home or anywhere that has a Type 2 connector. It will charge from empty to full in around four hours from a 7kW wallbox and around six hours from a domestic three-pin socket. The maximum charging speed is 3.6kW.

In addition to the new drive system, the Multivan also delivers new driving experience: Because the Multivan’s suspension is no longer compromised by the need to carry heavy loads (as the old van-based Caravelle was), it feels a lot more refined to drive. More Tiguan than Transit we’d say. It’s also become much quieter on board – even when the combustion engine starts up in between. And, because the exterior design is more aerodynamic, there’s notably less wind noise at motorway speeds.

The new Multivan also delivers a huge leap forward in terms of equipment and ambience. Volkswagen’s clever digital cockpit is available, along with a head-up display and online infotainment. It also benefits from a raft of driving assistance technologies including adaptive cruise control and self-parking Park Assist. There’s also a electronic handbrake and shift-by-wire DSG selector that has allowed Volkswagen to keep the flat floor and space between the front seats. The only downside is that the Multivan ‘gains’ the touchscreen control system from the Golf which is laggy and far less easy to use than traditional buttons.

The back of the new Multivan is home to some great new touches. There’s a new rail system in which seats (which are 25 percent lighter than the units they replace) can slide, rotate or be removed completely. There’s also a ‘multi-tool’, which is effectively a small table that can scoot along the same runners and prevent your biscuits from falling onto the floor.

And, because the Multivan no longer has van parentage, Volkswagen is able to offer customers the option of a full-length panoramic roof for the first time.

As for comfort, those confined to the rear of the new Multivan are unlikely to make any complaints. Although the exterior roof height is actually 50mm lower than the old Caravelle, the floor is lower and the rooflining thinner in the Multivan. Factor in the increased width, wheelbase and even larger boot  (469 litres) and the new model feels significantly more accommodating than its predecessor.

The ID. Buzz may steal a lot of thunder when it lands next year, but for those looking for an electrified hotel/office/living room on wheels, the new Multivan is a great package.