The Renault Twizy promised an electric revolution and could have been a brilliant alternative to a conventional car in towns and cities. However, as Mike Askew discovered, a clunky ownership experience let it down 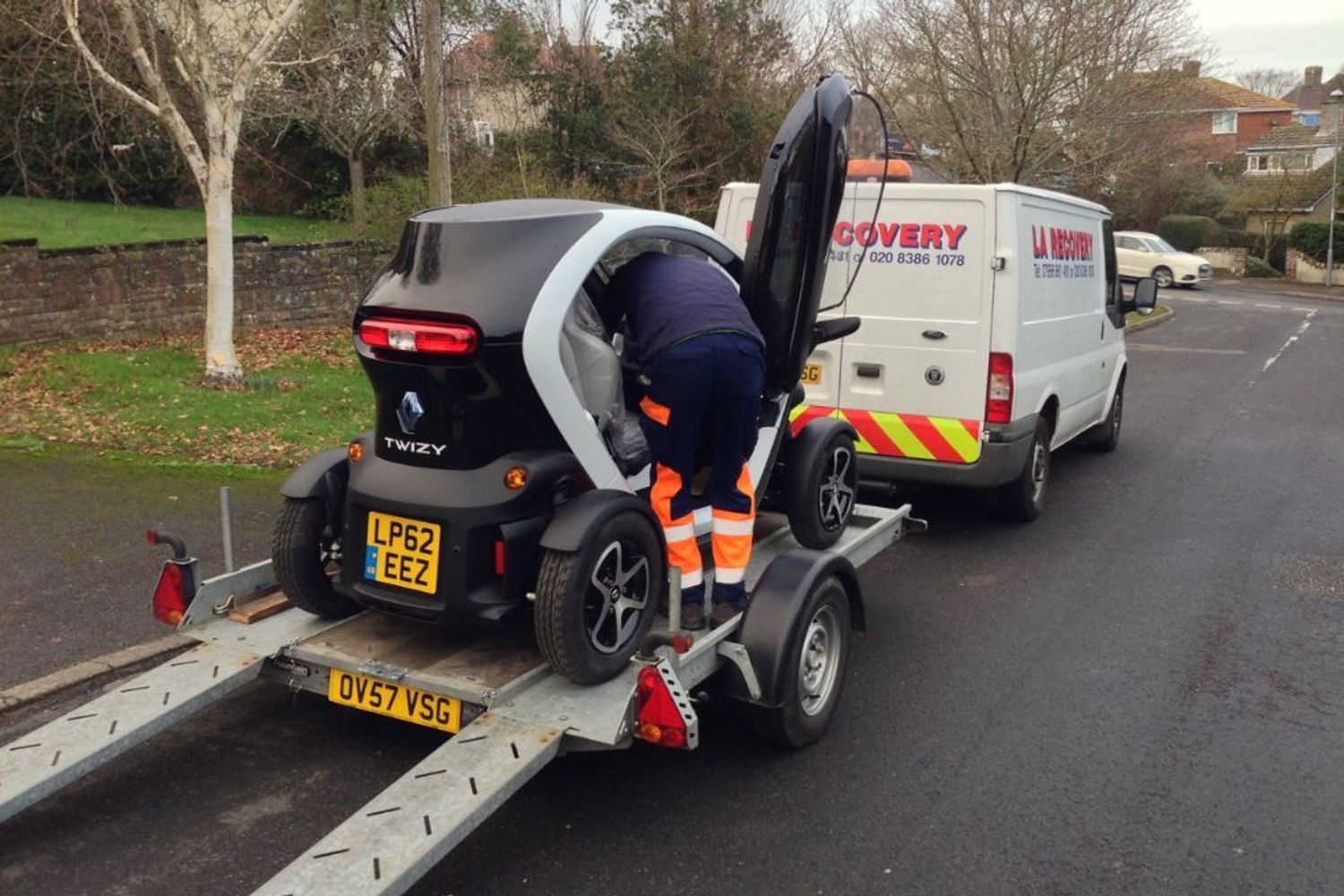 Ten years ago next month, I bought a brand new Renault Twizy. Over the phone. Unseen. I’m perfectly comfortable to admit that it was one of the most ill-advised automotive purchases I’ve ever made. Which is saying something when you consider that I’ve also owned (and still have) a first-generation Smart car and a French rally car. If you're looking to buy a used Renault Twizy and want to know about the running costs and everything else associated with the quirkiest electric car ever, read on...

I won’t bore you with the details of its acquisition, but its somewhat hasty purchase involved the end of a tax year and an eleventh-hour decision to run the Twizy as a company car. Had I actually thought it out and realised what Twizy ownership actually involved, I’d never have bought it.

What is the Renault Twizy?

Given that you’re reading this, you probably already know what a Renault Twizy is. But for those who don’t, here’s a brief summary. Designed by Renault to sit below the Zoe, it’s actually classed as a ‘heavy quadricycle’ and not a car – in the same way the Citroen Ami is. A basic two seater, the Twizy has a tandem seating arrangement with the passenger ‘seat’ positioned behind the driver. In terms of design, it’s beautifully simple. Twin scissor doors opened upwards - just as they do on a Lamborghini - and the central driving position is pure McLaren F1. It was and still is a very cool thing. It’s also pretty cool in a literal sense, too. Not only were the doors optional, so were windows. And if you wanted to keep warm on journeys, tough. There was no heater option.

Powering the Twizy is a 17bhp motor that delivers drive to the rear wheels. Under the floor is a modest 6.1 kWh battery that could be recharged with a three-pin plug that comes attached to a curly cable under the frunk.

Cleverly, Renault engineered the Twizy to be in a higher category of quadricycle than the Citroen Ami. So instead of being lumbered with a top speed of 28mph (as the Ami is), the Twizy can manage a far more usable 50mph. That said, the steering geometry and narrow frame meant that actually doing 50mph is an exercise in bravery.

The Twizy is, on the whole, great fun to drive. Lively away from the lights and with enough speed to keep up with 30-40mph traffic, it was a hoot to thread through the streets of my native Weymouth. It also attracted serious attention. Rarely did I manage a journey without having to explain to someone what it was, how much it cost and how far it would go on a charge. The answer to the latter is around 45 miles, in case you’re wondering.

What happened to our Renault Twizy?

So what happened to sour my relationship with the Twizy? Put simply, the Twizy was a fun car spoiled by the way it was sold. In my rush to buy, I rather glossed over the fact that I’d actually bought the car but not the battery. To be clear, I don’t blame Renault for this. It was communicated quite clearly and I happily signed the lease agreements just to hurry the whole purchase along. So yes, I’m an idiot.

Foolishly, I figured that the lease would have an end date and an option to buy. But (at the time) it didn’t. Every month I’d send Renault just over £30 to use its battery in my car. This was okay to start with, but after a year or so I started to wonder what exactly I was getting for my money. I called Renault’s finance arm and asked whether I could pay off the remainder of the pack cost. But no - that wasn’t an option. It was going to be £30 a month. Forever. If I sold the car, I had to get the new owner to take on the lease – a process that involved a credit check and paperwork hell for the new owner. If the new owner paid me the money for the car and then ‘forgot’ to contact Renault to transfer the lease, I’d still be on the hook. At this point it was becoming obvious that I was in a bit of a trap. I couldn’t just hand it back (as you could with a normal lease car) because I owned the car (minus battery). It was like owning your house and paying rent to live there.

Any fun I derived from driving the Twizy was tempered by the fact that a sizeable chunk of it was not, and never would be, mine. So, reluctantly, I started to plan an exit strategy. First I tried the ubiquitous WeBuyAnyCar.com. No dice. Wasn’t on their system - they didn’t want it. Next, I tried a few speculative punts to local car dealers. Most didn’t want to know, but then, out of the blue, a salesman from a nearby Mazda main agent came back to me. Remarkably, his sales manager had narrowly missed out on a Twizy at auction the week before and was interested in mine. I explained the whole lease situation and, remarkably, he sounded unfazed. After a bit of joint investigation, we discovered that Renault’s finance arm gave dealers a grace period on Twizy battery leases. Which effectively meant that I could safely offload the cursed lease to the dealer, who then didn’t need to take out a new one until it found a new home. I suspect it went on the forecourt with a hopelessly high sticker price while the manager used it as his own plaything. Fine by me.

But there was, however, a catch. The dealer had sensed my relief at finding myself off the hook, so gave me an ultimatum. He’d take the Twizy off my hands, but not for cash. He’d only take it as a deposit on another used car. A cheeky call, but it was, effectively, the only option on the table. Having had by fingers burned by the Twizy, my mission was simple - find something cheap but popular. Something that would be easy to sell on in other words. In a rare stroke of luck, the dealer told me that he’d just taken in a tired but tidy MX-5 in part exchange the weekend before. For a modest premium, the deal was on. Twizy out, MX-5 in.

But like all good stories, this one has a twist. A really annoying one. Around six months after getting shot of the Twizy, Renault changed its mind. Suddenly, leaseholders for Twizy and Zoe batteries could get a settlement fee from Renault to purchase the battery outright. Had this been the case when I had the car, I’d still have it - no question.

How much does a Renault Twizy cost to run?

Let’s address the elephant in the room first. If your Twizy still has a battery lease agreement in place, then all the figures I’m about to quote will be in addition to the £30-£50 or so Renault’s finance arm RCI will charge you every month.

If you have an ‘owned battery’ example, then all you really have to worry about is the cost of electricity. Even at current peak rates, the Twizy costs just over £2 to fill from empty to full. If you have cheap rate overnight power, that drops to under 50p to fill up. As for servicing, that should be done annually or every 18,000 miles. A full service only takes an hour - so the cost should be well under £100. Getting to the nearest Renault dealer if it’s more than 40 miles away is, however, tricky.

What to look for when buying a used Renault Twizy

If you’re looking for a used Renault Twizy, make sure you check the small print. Unless you fancy sending Renault’s finance division £30 every month, ensure that the one you’re looking at has is ‘battery owned’. If it’s the car of your dreams but still has the lease, make sure you get a settlement figure from Renault and factor that into your calculations. If you do take the plunge, enjoy - it’s genuinely a lovely thing that’s bound to be something of a collectors’ item in years to come.