It might not be as radical to look at as other electric cars, but the iX3 does most things well and has a usable range. Well worth a look.

Want to try it yourself? Apply for a test drive here.

“BMW's newest electric car is a normal-looking SUV rather than something excitingly styled like the i3 and i8 - which I really love. But it seems I'm in a minority and most buyers don't want to drive something crazy looking. The iX3 will be a huge seller as a result.”

“It might look like a 'normal' BMW X3 but the iX3 is hugely advanced underneath and has a proper usable range. It's big enough for a family too. It looks expensive, but will save drivers - especially company car users - a fortune.” 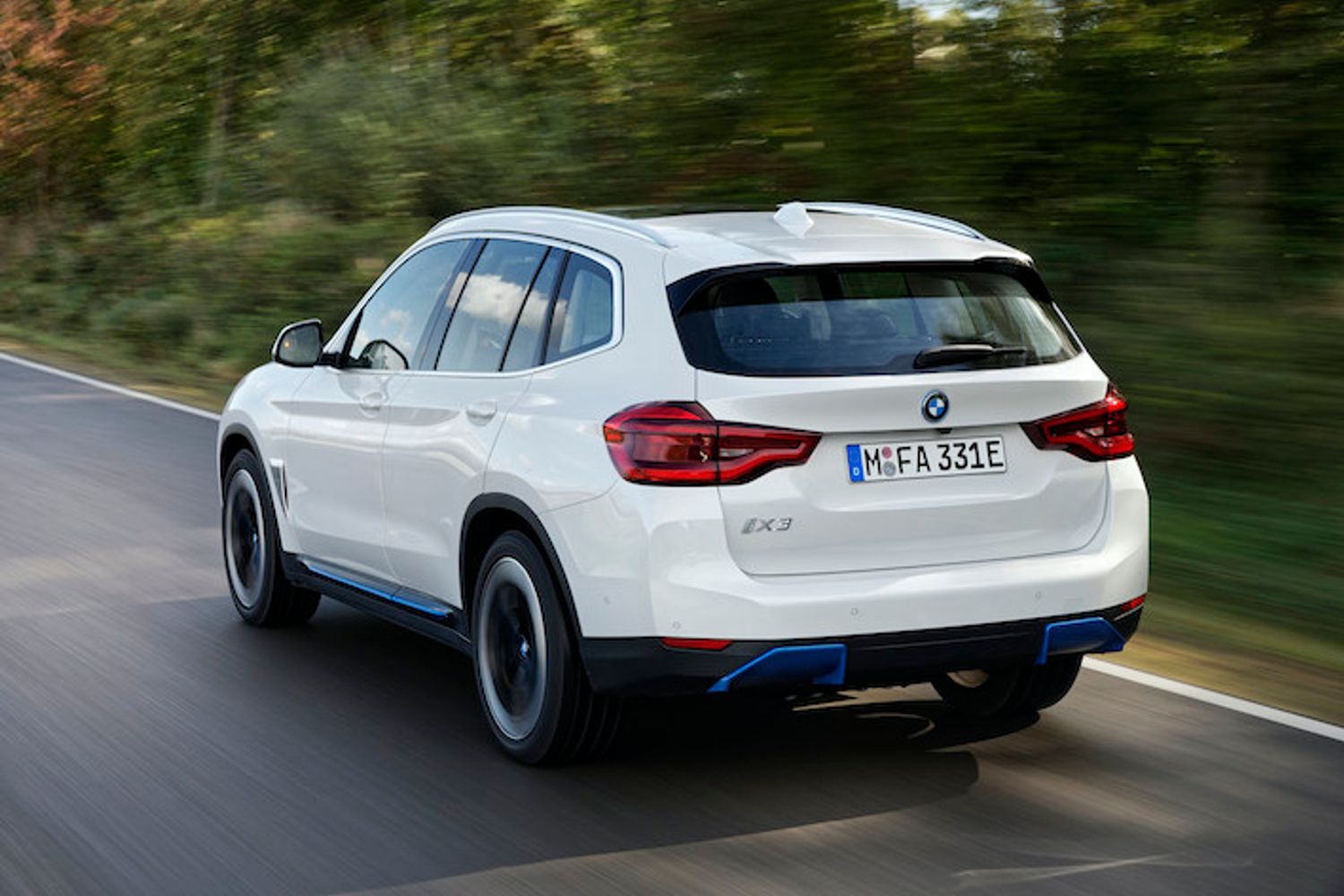 BMW may have stolen an electric-powered lead on its rivals with the introduction of the i3 hatchback and i8 supercar, but this new iX3 marked the start of the next generation for the Bavarian firm. And, with the i4 and iX now in showrooms too, BMW is looking strong in this market.

Aside from a few electric-blue highlights and a ‘filled-in’ front grille, you could be forgiven for not immediately recognising the iX3 as just another member of the standard range. That conventional styling compared to the more outlandish i3 and i8 is intentional and will be seen with BMW’s future electric models too.

With an 80kWh battery, the iX3 boasts the equivalent of 286bhp driving the rear wheels (there’s no four-wheel drive version) and is able to get from 0 to 62mph in 6.8 seconds and onto a 112mph top speed.

Fully charged, there’s a range of 285 miles and it comes with a Type 2 cable and three-pin household cable as standard. On a 150kW rapid charger, BMW claims that drivers can add 62 miles of range in just 10 minutes with a 0 to 80 per cent charge in 34 minutes. Probably more realistic is the fully-charged time of 7.5 hours on a domestic wallbox.

While the iX3 tips the scales at a hefty 2260kg, the good news is that much of that weight is low down giving it a lower centre of gravity than the X3 30i and the packaging is impressive too. Boot space is only marginally affected compared to the standard X3, losing just 40 litres of underfloor storage (510 litres with the seats up, 1560 with them down) compared to 100 in the PHEV.

As the first car to get BMW’s fifth generation of battery technology, there’s also some clever thinking both on show and under the skin. Compared to the i3, the iX3’s eDrive system has a 30 per cent better power density and uses 62 per cent less cobalt per kWh. Even the iX3’s alloy wheels give around six miles of extra range through less weight and reduced drag.

A more visible sign of those advances is the iX3’s regenerative braking system. Regular EV drivers will be used to the three different regen settings available – low, medium and high – although they are buried within the infotainment system menu, so aren’t that easy to change on the move. You can however push the gearlever across to B mode which acts as a shortcut to the highest regen mode.

All that isn’t the bad news that you might imagine however, as there’s a fourth ‘Adaptive’ setting. Using artificial intelligence, the sat nav and the forward radar, this automatically decides which level of braking to use depending on the road and traffic conditions. BMW claims that it means 90 per cent of ‘reducing speed situations’ can be handled without using the brake pedal.

That may all sound a little odd, but it works remarkably well and in reality it’s hard to imagine regular iX3 drivers using any other mode. It also adds to the iX3’s otherwise excellent driving experience. While you’re never not aware of that extra weight, it’s not problematic. There’s little body roll and the steering is sharp enabling you tackle twisty roads with confidence and it handles surprisingly well. The ride quality in Comfort mode is good too, although the Sport mode is too firm for any road that isn’t perfectly smooth.

There’s just two versions of the iX3 on offer, the Premier Edition and Premier Edition Pro, with £3000 between them. BMW is expecting the entry-level car to be the best seller with an electric tailgate, 20in alloy wheels, adaptive suspension and a panoramic sunroof all as standard. When the iX3 is already so much more than the plug-in hybrid version though, it’s a shame that you need to stretch for the Pro for the likes of a head-up display, automatic high beam and the Harman Kardon stereo.

It would be very easy to dismiss the iX3 as an expensive step up from its plug-in hybrid alternative. But here at Electrifying we applaud that BMW is offering another electrified choice to X3 customers and that 285 mile range makes it pretty usable as an everyday car – especially for business drivers who can take advantage of its low Benefit-in-Kind company car rates. It’s no mistake that BMW is expecting a hefty rise in corporate sales for this iX3. It may not come cheap, but we think the iX3 is a very impressive car.

Discover the all-electric BMW iX3 with a test drive from BMW. Subject to applicant status and availability.