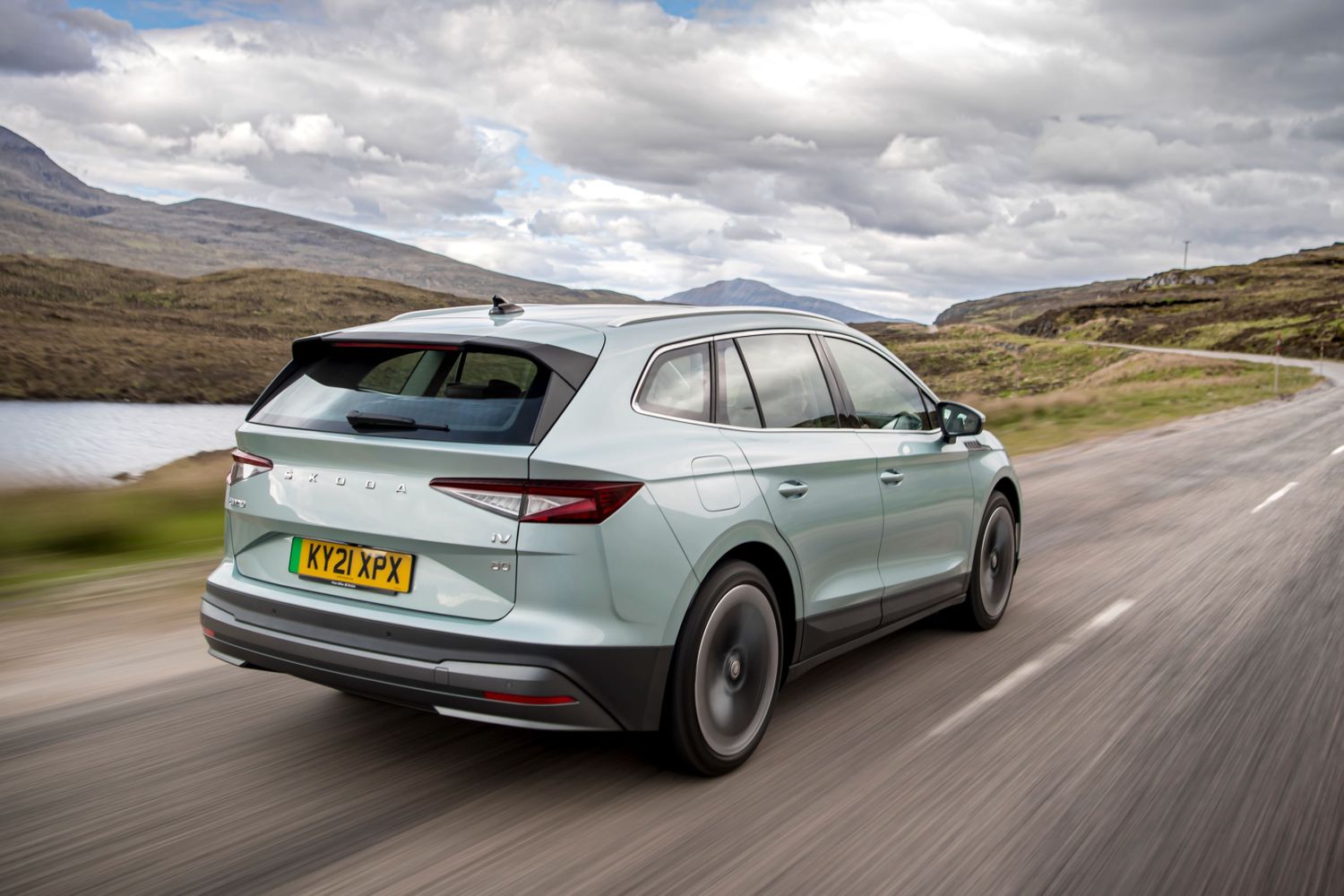 It’s fair to say the Enyaq has caused a lot of excitement around the Electrifying office, mainly because we have had so many questions about it from readers.

This isn’t surprising, as it seems to have everything going for it. Here is an electric car which uses the same mechanical hardware as Volkswagen’s ID.3 and ID.4 but has more space, better efficiency, and nicer interior and a lower price.

That means it has a range of up to 333 miles in the big-battery versions while the cheapest models are around £32,000 once you’ve taken off the government grant.

You can choose between two pack sizes; 58kWh and 77kW, which Skoda confusingly calls the 60 and 80. The smaller one uses a 178bhp motor, which is about the same as an old 2.0-litre petrol or turbo diesel. It has an official range of 256 miles on a single charge.

The larger 77kWh model we tried produces 201bhp and – in theory - returns 333 miles on a single charge. Both come in two-wheel-drive with the power going to the rear wheels, and there's also a four-wheel-drive model with the 77kWH battery called the 80x.

Inside it’s very spacious, with a flat floor without the lumps and bumps you need to fit in bits of engine and gearbox in a conventional car. There’s plenty of space in the front and rear, even for lanky teens.

There’s space for their kit too, with 585-litres with the seats up, which is bigger than a Mustang Mach-e or the ID.4. This can be extended to 1,710 litres with the rear seats folded. That’s more spacious than the biggest Volvo estate and only a little less than Skoda’s biggest SUV.

The size of the interior is the same across the Enyaq line up, but everything else will change according to your taste and how much you want to spend. Skoda has ditched all the usual trim levels we are used to. Instead, you choose your battery size, your preferred interior and then your extra equipment. In theory this means you can have the kit you want rather than the stuff someone in marketing thinks you’ll want, but the options are bundled together into a series of packages which means, for example, if you want a key that you don’t have to take out of your pocket to use, you have to pay for ‘additional noise suppression’ or an electric tailgate.

Tick a few boxes like this on the order form and the cost soon adds up. The top versions with the fanciest interiors go up to £43,000 which makes it the most expensive Skoda ever. But add all of the options and it could top £53,000. Suddenly it doesn’t look like such a bargain, so be sure to choose carefully and compare the Enyaq to rivals like-for-like on equipment.

The biggest of those rivals is the closely-related VW ID models. We’ve two main criticisms of those cars – the cheap-feeling interiors with hard, scratchy plastics, and the occasionally obstructive technology. The Skoda improves on both of these and feels a little more luxurious purely because there are some actual buttons rather than relying on a touchscreen. That’s good news as it’s much less distracting while you are driving than trying to prod a touch screen or get a voice recognition system to understand you. The number of those buttons decreases rapidly on the lower-spec models though, leaving you with blank places where switches should be.

There are more plush-feeling materials around the interior too, but there are still parts that feel a bit low-rent compared to other cars in this price range. The door pull for example feels like something you’d find on public transport rather than a £40,000+ car, and you’d have to touch it every time you get in the car.

Once you are on the move, there is better news. The performance level is really well judged for a family car; it’s absolutely fast enough, but you don’t feel it's unnecessarily quick like some rivals. Doing 0-60 in five seconds in a family SUV might impress small children but it’s just not needed and adds to costs like insurance and maintenance.

The huge 21-inch wheels which are an option look fantastic and give the steering a sharper feel, but the lack of squishiness in the low-profile tyres does mean you feel the bumps. Replacement tyres are pricey too. There's a 20-inch option which offers a decent compromise or you can go smaller if ride comfort is more important than looks.

Even on the bigger wheels this is a remarkably calming car to drive with excellent refinement. There are clever touches such as a predictive braking regeneration which knows when you are approaching a roundabout or junction and ups the level of deceleration. If you are on a clear motorway it will just coast if you lift off the accelerator. If you’re used to another electric car it might take some getting used to, but it soon makes sense and works well.

Lower spec cars don't get this, or even cruise control.  Even adding drive modes is a £285 option - a surprise since they are standard on most other electric cars and just a software tweak.

But it doesn’t seem to boost efficiency too much. The car we drove should have been getting 333 miles from a full battery, which works out at an impressive 4.3 miles per kW. That’s better than the VW ID.4, which can only officially manage 310 miles. But as with the ID.4 we struggled to achieve near that claim, so our first try of the Enyaq suggests that it may also suffer from an overly optimistic efficiency figures. Over a longer drive in a variety of models in milder weather, the Enyaq was getting 3.5-3.9 miles for a kW.

If you want more efficiency when it’s cold outside, a heat pump is a £1,000 option which helps the Enyaq use less power for the heater when it’s wintery. That’s standard on some rivals like the Nissan Ariya and even the Leaf, but we reckon it’s worth having if you regularly intend to go on longer journeys and don’t want to wear a coat the whole way in winter to save a few miles.

When you come to charge, the Enyaq takes between six and eight hours on a home wallbox, depending on the battery size. If you are out and about and need a rapid charge, all models now accept a 120kW for the small battery model and 125kW for the larger one - this used to be an option, so check if you are buying a car from stock. This will mean that you charge from 10 to 80 per cent in 38 minutes.

So, the big question is – are we disappointed? Is this a better car than the ID.4 and Mach-e? Has it been worth the wait? Well, the Enyaq drives brilliantly. It’s not as exciting as the Ford and the big wheels don’t help refinement, but it’s extremely relaxing and performs effortlessly. We also love the interior on the more expensive models, and the quality is mostly good enough. It’s still not perfect in places, but it certainly doesn’t feel as pared-back as the ID.3 and ID.4.

It’s hugely practical inside too, and we think the performance is just right for a family car - not slow and not ridiculously, unnecessarily fast like some electric cars. When it’s priced as highly as this particular car though, it starts to go up against some stiff competition and even further down the range you’ll need to be checking the comparison chart carefully to see what you’re getting for your cash. Start ticking a few option boxes and it doesn’t seem the bargain we first thought it would be. But choose the right model for you, select your options to tailor it to your lifestyle and driving pattern and it could be the best family electric car you can buy. And that’s a reason to get excited.