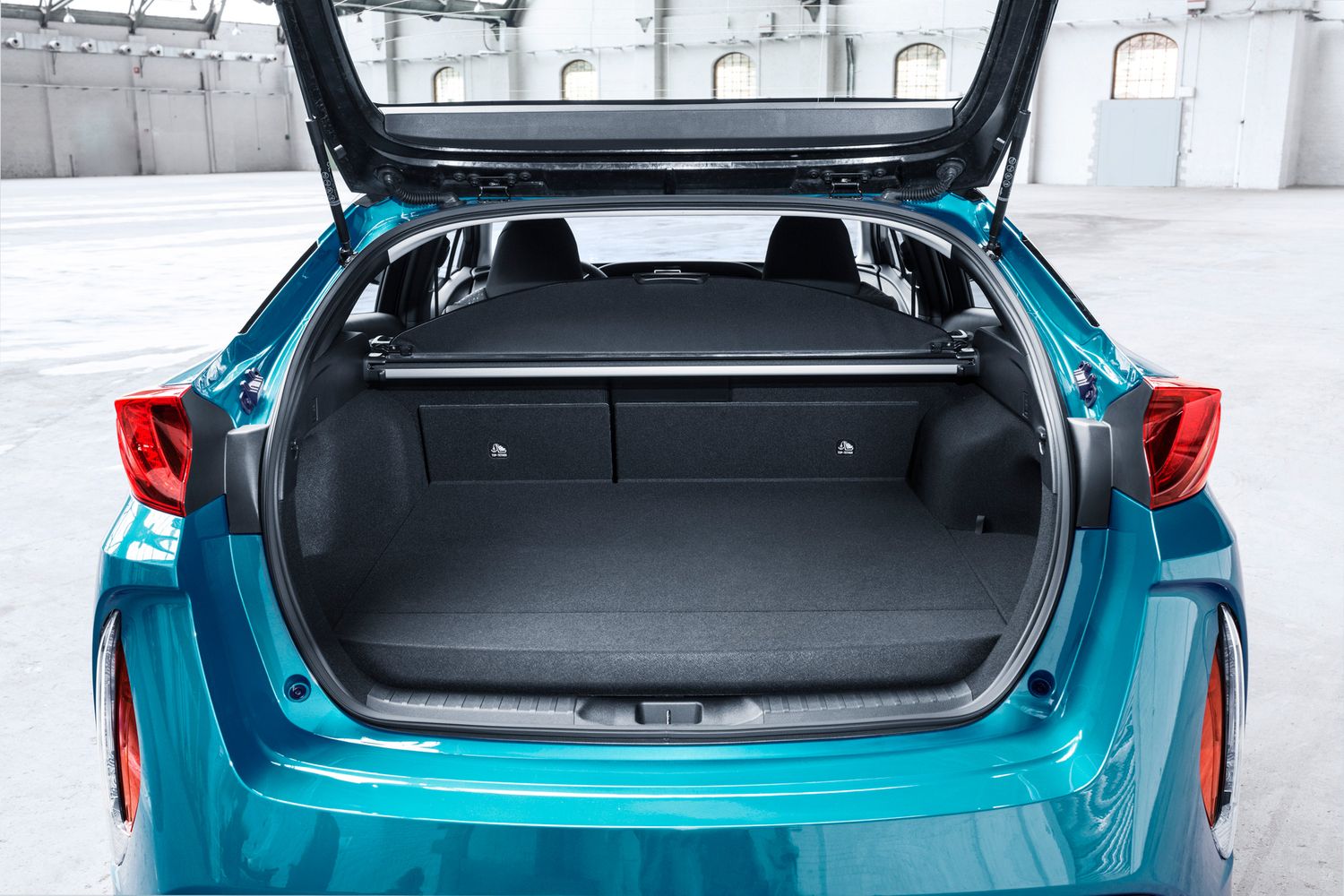 Front seat occupants will have plenty of room, but the back can be cramped for tall passengers. The boot is big, but shallow.

The taxi ranks of the world wouldn’t be full of Priuses if they weren’t a practical, spacious and comfortable car. For the driver and front seat passenger there will certainly be very few complaints, as there is plenty of head and legroom. It’s full of pockets and cubby holes too, making it easy to find a home for your cups, phones and receipt books.

In the rear it’s not quite so rosy, as the swooping roof which makes the Prius so aerodynamic also steals a chunk of the headroom compared to a more upright car like a Nissan Leaf or Kia Niro. Legroom is fine though, especially as there are no batteries stored under your feet, in contrast to most pure EVs.

Both the Prius and PHEV have the same amount of luggage space with the seats up and down. It’s a reasonable size too, but is quite shallow compared to a conventional hatch, so you might find yourself storing suitcases flat rather than upright. This generation of Prius has been around for a few years, but it still has a decent amount of technology and a good safety record.

The Prius is a high-tech car in many ways under the skin, but there are also a decent amount of buttons on the dashboard to keep gadget fans happy. All of the Prius models have an eight-inch infotainment screen, while the PHEV gets extra dual 4.2- inch TFT screens with specific displays for the charge information.

Business Edition Plus models also have a wireless phone charging tray which is big enough for the latest plus-size phones, but Apple CarPlay and Android Auto aren’t yet included.

A colour head-up display projects vital information onto the base of the windscreen, meaning you don’t need to look down at the dials to check your speed or the navigation instructions.

The top-of-the-range Excel models add some equipment which you might reasonably expect to be standard on the lower models, such as rain-sensing wipers and front and rear parking sensors. It also gets self-parking, a 10-speaker JBL-branded audio system and voice recognition control for the stereo/navigation system.

The Prius has had five-star ratings from the independent testers at Euro NCAP for nearly two decades and three generations of the model. The new car was tested when it was new back in 2016 but the scores are impressive even today, with a 92% rating for adult occupant safety. This is partly down to a strong metal shell, but the Prius also has all round airbags, including one to protect the driver’s knees.

It did well for its accident protection tech too, and the “Toyota Safety Sense” package is standard on all Priuses. It includes an autonomous emergency braking system which can detect and react to pedestrians as well as vehicles in the car’s path. A lane departure alert which can nudge the Prius back into lane is also part of the pack, along with a blind spot monitoring system and ‘Rear Cross Traffic Alert’ – a gadget that detects if a car is moving towards you as the Prius backs out of a parking space.

« RangePerformance »
Own a Toyota Prius or looking to buy? Tell us about your experience