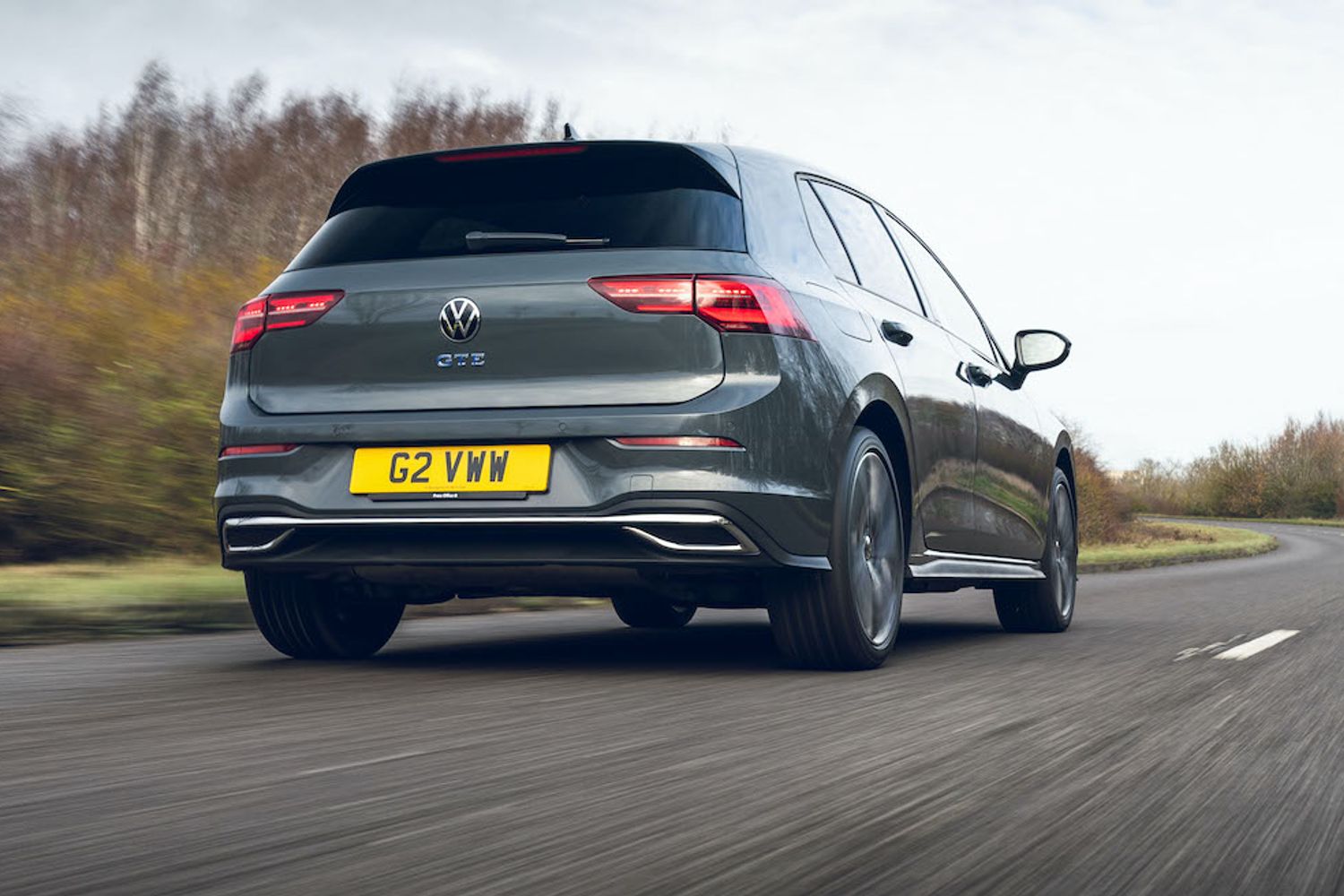 ​The Volkswagen Golf GTE is one of those cars that seems like it has every imaginable box ticked. It’ll do 40 miles of pure electric running (according to official WLTP figures) courtesy of its 13kWh battery, before a 1.4-litre turbocharged petrol engine kicks in to keep the GTE functioning like any ‘normal’ petrol car.

​Charging that battery takes under four hours from a dedicated home wallbox, or some five hours from a normal three-pin domestic socket. The cables are provided for both of these charging methods, and it’s reassuring to know that the Golf GTE’s Type 2 charging socket is the European standard, and is compatible with most public car chargers. It’ll charge up at any Type 2 AC charger (which are now very common in towns and shopping centres), but that four-hour top-up time is the fastest you’ll ever get, as the Golf’s charging rate is capped at 3.6kW. That’s around half as quick as the peak rate of one of its chief rivals, the plug-in hybrid Mercedes A250 e.

The GTE looks great; there’s a very deliberate aping of the GTI going on here, with honeycombe styling cues on the grille, aggressive bumper and LED light design, and even an almost-tartan upholstery finish to the sports seats. More than that, with the electric motor and petrol engine working together, the GTE churns out 242bhp, which is more than enough to give it a rather sporting 0-62mph time of 6.7sec.

However, in practice it’s disappointing that the Golf doesn’t live up to the promising looks and on-paper numbers. It’s certainly rapid in a straight line, and the six-speed dual-clutch automatic gearbox does a decent job of delivering the right ratio at the right moment, but the GTE feels a touch too heavy and inert to deliver hot hatch-like fun on the right road.

Still, it’s always composed and predictable, with a great driving position and level of refinement that makes it a brilliantly slick commuter whether it’s long motorway treks or torturous town traffic that you muddle through most of the time. On the optional adaptive dampers of our test car, it’s also comfortable even around town. We haven’t driven the GTE without these variable dampers, but our experience of the Seat Leon e-Hybrid on standard suspension suggests that they’re a wise addition, since the Seat (which shares a platform and powertrain with the Golf GTE) is quite unsettled on poor surfaces.

The Golf GTE it its own trim level in the Golf lineup, and it gets everything you’d expect including automatic LED headlights, heated seats, adaptive cruise control, swanky ambient lighting and more. A 10-inch colour touchscreen has all the features you’d expect including wireless Apple CarPlay, and configurable digital driver’s dials also feel very up to date, but touch-sensitive climate control buttons just beneath the screen are a bit of a pain as they’re too easy to activate by accident.

Mind you, you’d expect a lot of equipment given the Golf’s price. At nearly £36,000, it’s much more expensive than a Mercedes A-Class plug-in hybrid, let alone the Seat Leon e-Hybrid, Skoda Octavia iV and Renault Captur E-Tech. The Mercedes even undercuts the GTE for CO2, so can deliver cheaper company car tax, although the Golf GTE is still way cheaper than an equivalent non-electrified petrol or diesel alternative.

The Golf disappoints for boot space, too. Those batteries are fitted under the boot floor and take up 108 litres of space compared to other Golf models, which leave the GTE with only 273 litres of luggage room – comparable to the much smaller Toyota Yaris Hybrid, for some context.

Having said that, the boot aperture is wide and the floor flush with the load lip, so many families will be okay with the Golf’s carrying capacity, even if it’s disappointing by class standards. There’s also no estate Golf GTE variant, as there is with the Seat Leon and Skoda Octavia PHEV models.

Overall, the Golf is a pleasure to drive, but a high price, slightly underwhelming dynamics and a disappointing boot size make it hard to justify despite a serious ‘want one’ factor.

« UsedRange »
Own a Volkswagen Golf GTE or looking to buy? Tell us about your experience