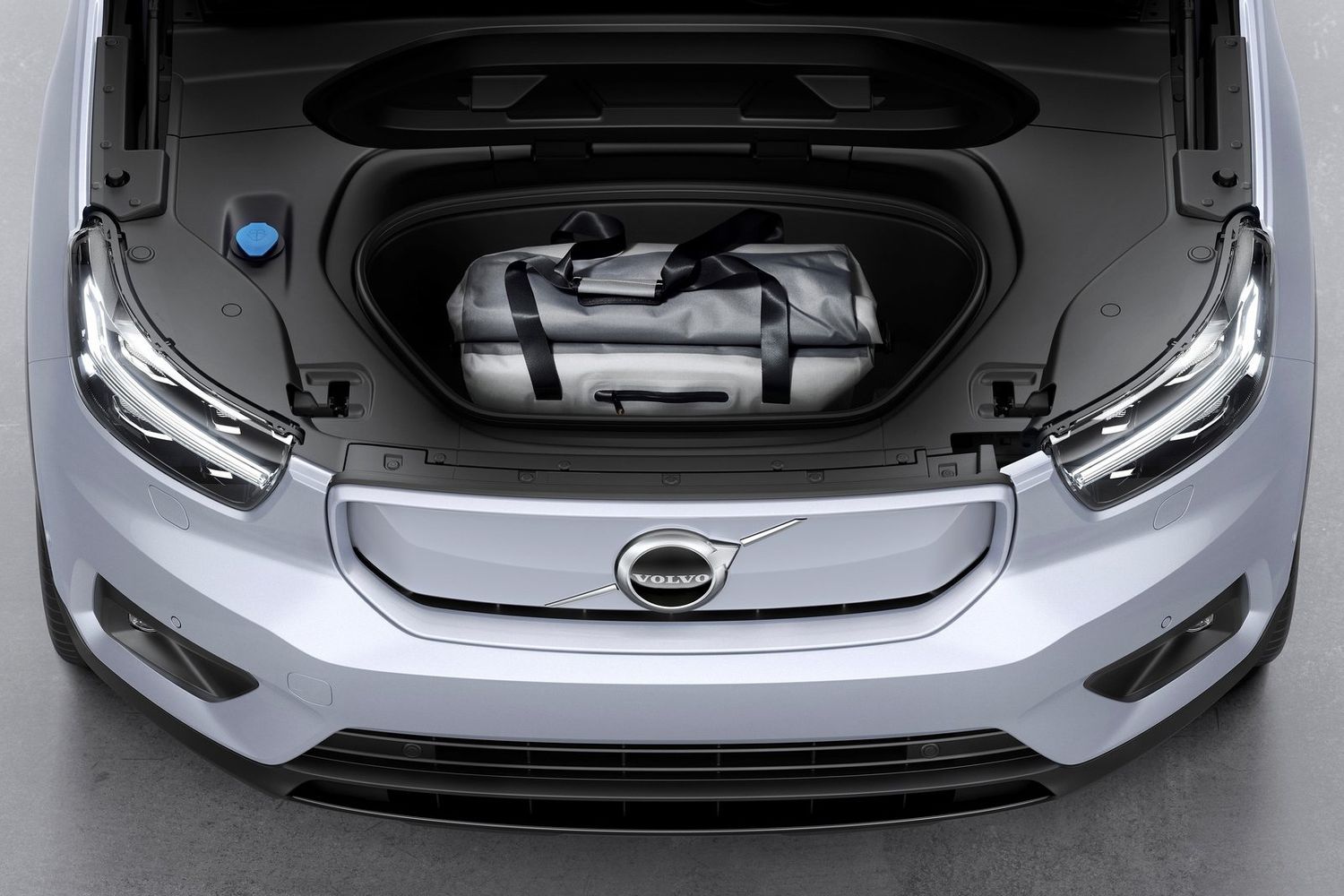 The Recharge retains most of the space and practicality of the conventional XC40, although the boot has shrunk a little.

The XC40 is a proper mid-size SUV which has been designed with typical Swedish attention to detail for design and practicality. There are big door pockets and storage areas inside, and it even has a rubbish bin between the front seats – this will be especially welcome for anyone whose kids usually just throw wrappers and cans on the floor.

There’s plenty of space for four to be comfortable and five with a bit more of a squeeze. The passenger space isn’t compromised by the conversion of the car to electric although the boot is a little smaller, losing 47 litres of space to the powertrain and batteries. It’s still big enough for a few suitcases, a pushchair of golf clubs though and you get 31 litres of space back in the form of a ‘frunk’ under the bonnet where the engine would usually sit. It’s a perfect place to store charging cables, except that the socket is at the back of the car!

If you've got younger kids, make sure you take your child seats to the dealer to see if they fit. The rear headrests are fixed and mean only certain boosters fit.

It’s clear that the closest rival to the XC40 in terms of price, range and performance is the Tesla Model 3. And one of the Tesla’s big attractions is the tech, so Volvo has tried its best to match it. This doesn’t just mean in the way it drives, but also the interface between the car, the owner and the rest of the world.

Hence the XC40 Recharge is the first car to feature Volvo’s new infotainment system which is powered by Google’s Android operating system. Just like the Tesla, it will get updates over the airwaves so it can have the latest apps and software. You’ll just wake in the morning find the car will have upgraded itself.

You can also do all the expected things – preheat the car via an app and use Google’s state of the art voice recognition to give the sat nav and entertainment commands. Despite the Google involvement, Apple CarPlay compatibility is standard too.

Volvo is synonymous with safety, so it won’t be any surprise to hear that the XC40 is one of the safest cars on the road. As you’d expect, the diesel version of the XC40 got a full five-star rating in the independent Euro NCAP crash testing and an exceptional 97% score for occupant protection. The boffins there are happy that it applies to the electric version too.

Volvo has got to some pretty extreme lengths to ensure the battery is almost as well protected as the occupants. It is sited under the passenger cell floor and enclosed in a special orange case which alerts rescuers that there is high-voltage present. It’s also surrounded by a special strong alloy cage and dedicated crumple zones. The rest of the body has also been reinforced to allow for the structural changes made when the conventional engine was removed.

The XC40 also has an impressive package of crash prevention technology too, including lane departure warning, emergency braking radar and all-around cameras.