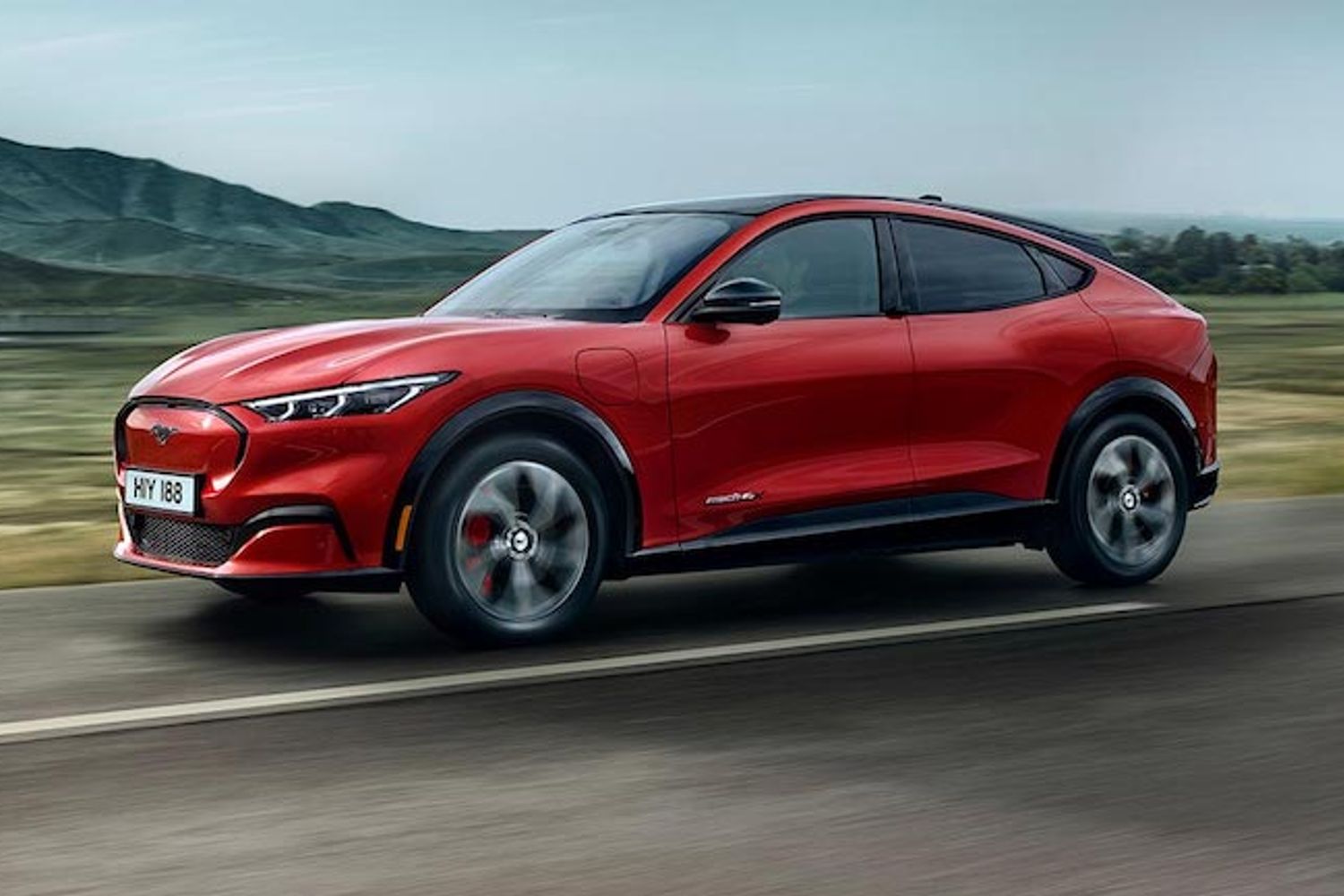 Ford is widely credited with killing off the electric car back in the first decade of the last century. Battery-powered vehicles were just as popular as those with internal combustion engines and there was a sort of Betamax-versus-VHS battle to see which would be the dominant way of propelling the horse replacement. Then Ford started making the Model T in 1908, brought petrol engines to the masses and the rest is history.

Perhaps it’s not a surprise then that Ford has been slow off the mark producing its first proper electric car. The company has flirted with them in the past with concept cars and the odd experimental van, but has then quietly given up. It even bought a promising Norwegian EV company called Th!nk in 1999 and then dumped it four years later.

But now, Ford is getting serious. So serious in fact that it is betting on its most precious horse – the Mustang brand. The company’s first ‘proper’ electric car will wear the galloping pony badges of its most iconic car.

Unlike the Mustangs we all know, the Mustang Mach-E is not a sleek two-door coupe. To the horror of traditionalists, this is an SUV - although it’s pretty far removed from the boxy-shaped off-roaders which usually fall into that category. No, this car is an SUV in the same way that a BMW X4 or a Tesla Model Y can be described; four-door, swoopily-styled and high-riding.

The fact it’s an SUV is unlikely to be the factor which upsets those Mustang fans the most though. They are more likely to be horrified that this car is fully electric rather than powered by a big, rumbling V8.

Even the most ardent petrol head couldn’t complain about the power on offer though. Like the Mach E’s biggest rival – Tesla – the electric Mustang has a variety of power options that range from quick to indecent. A GT version due in late 2021 will have 459 bhp and sprint to 60mph in just 3.7 seconds, while lesser versions range from 258bhp to 337bhp with either a single motor driving the rear wheels or dual motors and all-wheel drive.

Even the battery sizes seem to be a nod to Elon’s flagship Model S and X, with a choice of 75 or 100kWh options. That’s pretty big for this size of car - at 4.7m, the Mach-E is an almost identical length to the Model Y, but shorter than a Mondeo.

Ford need to make it drive in a way which will tempt people out of the Tesla and Polestar of course, but will also need to convince those Mustang fans that it isn’t a sell out. Has it succeeded?

We drove what is expected to be the biggest-selling model, fitted with the dual motor and extended range battery, giving it all-wheel drive and 345bhp. That gives is a 5.1 second 0-60 time, which is better than many performance cars. Despite this, the range of 335 miles safely outstretches the Model Y’s 314 miles.

As you’d expect, this means the Mustang has plenty of performance, even if it doesn’t have the truly shocking pull of a Tesla Model 3 at full beans. But the Mach-E corners in a far more entertaining way, and in many ways it really does feel like driving a Mustang as you look down that long bonnet.

Because the huge batteries sit under the floor, the centre of gravity is lower it feels stable and sporty. The engineers have calibrated unique settings for the shock absorbers, springs, anti-roll bars, steering and powertrain specifically for Europe’s narrow, more twisty roads and higher speed limits and it shows. This car doesn’t feel wallowy like many American cars – there's little in the way of body roll. Even through a slalom the Mach-E feels well controlled, although the steering feels a little strange, becoming weirdly heavy when turned away from the straight ahead position.

You get used to it, but it's not so easy to accept the ride comfort. On the 19-inch wheels of our twin-motor model it is just too harsh for British roads and has a crashiness through potholes which can become tiring. A Model 3 has a hard ride too, but seems to take the edge of the bumps a little more effectively than the Ford. Perhaps it means the base model Mach-E with its squishier tyres and smaller wheels will be the pick of the range.

Like most other electric cars, the Mach-E has three driving modes to match your mood or the amount of electricity you can afford to use. But instead of the usual Sport/Normal/Eco naming, Ford’s marketing brains have sat around a mood board and come up with the alternatives ‘Whisper’, ‘Active’ and ‘Untamed’. We cringed a bit, but perhaps you’ll think its genius. Apparently the sportiest mode was going to be called 'Stampede' until the lawyers reined in the plans.

Unleash the Untamed/Stampede/Sport mode and the car is noticeably more responsive to inputs to the throttle and steering wheel. This setting also adds a fake V8 noise and even a ‘downshift’ feel as though you’re changing gear. Perfect for the Playstation generation. Not so good for cynics who might find it all a little gimmicky.

When it comes to stopping, the Mach-E wipes off speed effortlessly, with no hint that this is a heavy car. But the level of regeneration will be a disappointment to drivers who are already familiar with electric cars. Ford claim that it’s possible to drive with just one pedal and you should never need to touch the brake except in an emergency. We can only guess that their test drivers have better foresight than us, as we constantly had to use the brake pedal in European traffic.

Once you’ve reached your destination and need to recharge, the Mach-E has some impressive ability. Even the cheapest version can take a rapid charge at 115kW, while the rest of the range can manage 150kW inputs. That’s fast enough to get a 70 mile top up in under 10 minutes. That rapid charge capability is great, but the convenience and reliability of the Tesla Supercharger network is still a major draw for buyers.

The inside clearly has a nod to Tesla (and perhaps Polestar) too, with a dashboard dominated by a huge 15.5” iPad-like infotainment screen. It looks after a few too many functions for our liking, but it isn’t quite as all-or-nothing as the Model 3’s tech and there is at least still a smattering of dials in front of the driver to make the initial drive less intimidating.

As you’d hope, the technology is pretty impressive, with ‘Machine Learning’ helping the car to anticipate drivers’ habits over time, learning from each user’s routines to make the navigation and communication suggestions at the right time. There’s the potential to use your smartphone as a key too, but sadly this won’t be available in the UK at launch.

While the kit count is high, the quality is mid-table. The Mach-E can’t claim to be a ‘premium’ brand and falls short of the solid and stylish look and feel you’d find in an Audi e-tron, Polestar, BMW iX3 or even a MINI Electric. But the Mustang feels more solid than a Tesla, even if it does have the odd switch and control borrowed from a common-or-garden Focus.

It’s also reasonably comfortable for adult passengers in the rear, although that coupe-like roof line means it feels a little enclosed. Legroom is a little cramped too, especially compared to a car like the VW ID.3. Boot space is pretty decent though (but still behind the ID.4), but there’s also a 100 litre "Frunk" at the front, which is plastic lined and even has a drain – perfect for muddy boots and sports kit.

So Ford’s long awaited real attempt at a dedicated electric car is impressive. It drives in a way which will placate Mustang fans. It has the technology, range and charging capability to make potential Tesla buyers look twice and is spacious enough for (small) family life. But this isn’t the car which will swap Ford’s massive UK sales to electric. That will be pushed by two vehicles: the Electric Transit, due in 2022 and a smaller electric hatchback with hardware borrowed from Volkswagen’s ID.3. Perhaps then Ford will be paying suitable penance for killing off the EV more than a century ago.