Renault's second-generation electric range kicks off with an impressive five-door family hatch. It's a great package and very efficient, but looks pricey compared to some rivals.​

“I really like the look of the Megane E-Tech, and the stats are all really competitive. It's a shame the spec isn't as good as we expected and the price looks a little steep.”

“I'm a big fan of the Zoe, so it's great to see Renault finally build on that with the new Megane. It's a really impressive package and I love the Google-based infotainment tech. It really works!” 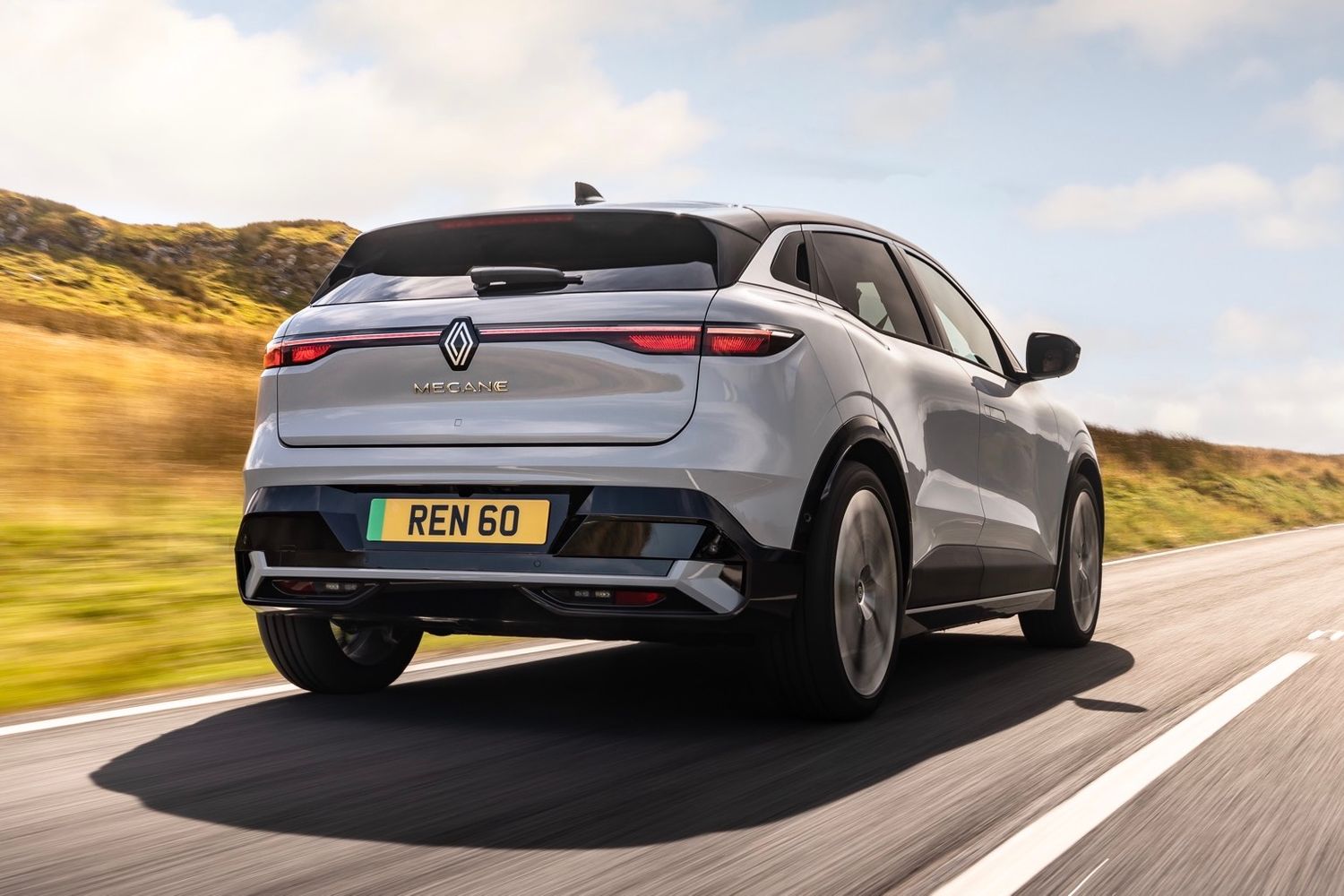 Renault is no stranger to the world of electric cars. Indeed, there’s a good argument to suggest it was one the pioneers with both the Zoe (which continues to sell in decent numbers) and the Twizy (which doesn’t). Along the way we’ve also had the Fluence, an instantly forgettable, under-batteried family electric that sunk without trace in 2014.

Although the French giant was selling electric cars long before the idea was even on the table at the likes of Volkswagen, Renault has been surprisingly quiet over the last couple of years. The Zoe is starting to show its age - especially in NCAP crash tests - while the Twizy has quietly disappeared from the brand’s UK line-up.

But there’s good news on the way. New CEO Luca de Meo has proclaimed a “renaulution" and has written a blank cheque to teams developing a new Renault 5 and Renault 4. The brand has also invested hugely in a new electric car platform (a set of foundations that can be used to underpin a number of new models) that will see a new, second generation of Renault electric cars. The platform has been developed with Nissan, and provides the base for the new Ariya SUV.

The first of Renault’s new wave of electrics is this, the Megane E-Tech. Aimed fairly and squarely at the Volkswagen ID.3, it will be the first car to give the German hatch a true run for its money. This is good news because competition means that car makers have to work twice as hard to part us from our cash.

So what’s it like? Well, ignore the fact that Renault has chosen to slap the Megane badge on it. This isn’t merely a converted battery version of the brand’s evergreen family hatch. The Megane E-Tech is an all-new, ground-up electric car packaged in a family-friendly five-door hatchback-cum-SUV shape. At 4.2 metres long, it’s fractionally shorter than an ID.3 and, thanks to a clever new battery pack design that is only 11cm thick, hides its height extremely well. It cuts a chunky, purposeful profile that strikes a decent balance between familiar and futuristic, and thanks to some bold detailing in the front bumper and shallow headlight strips, manages to be one of Renault’s most engaging designs for years.

Inside, the Megane is equally impressive. Renault has found the best balance in this class so far from digital instruments, a large touchscreen and a few conventional switches. It’s a shame we don’t get the bigger display which is used in left hand drive cars though.

And the fact that infotainment and navigation are now based on a Google operating system (OS) also makes usability easier. There are a few oddities such as the angular mobile phone holding shelf that does a fine job of kneecapping drivers of a certain height, and a curious over-supply of steering column stalks, the Megane E-Tech is well thought-out.

Other occupants also fare well. As with all models designed around the electric drive, there is more space than usual. The flat floor gives rear seat passengers more fidget-space and although the sloping roof line and small windows make it feel a bit more closed-in than it actually is, the E-Tech promises to be an excellent family car. The boot can hold 440 litres of luggage, and thanks to Renault’s slim battery design, the floor is low and wide.

Another reason why the Megane has such a spacious boot is because, unlike the Volkswagen ID.3, the E-Tech has a front-mounted motor. According to Renault, this layout was chosen becasue it saves around 100kg of weight for cables and cooling. On the downside, there’s no frunk under the bonnet, but given that the Volkswagen doesn’t have one either (even with the motor at the rear), it’s no deal-breaker.

Oh, and if you’re hoping for an all-wheel drive version, don’t panic. Renault has engineered the platform to accept a motor at both ends (the Nissan Ariya will be offered with dual motors), so expect some kind of all-wheel drive Renault at some point in the future. This will take the form of a sporty Alpine version that will become the brand’s new flagship model.

In terms of battery size and range, Renault will offer the Megane E-Tech with a 40kWh or 60kWh battery, with the latter being the first offered to UK drivers. The latter delivers a WLTP range of 280 miles, which is pretty impressive when you consider that Volkswagen’s ID.3 58kWh offers around 18 miles less.

DC rapid charging can be done at a maximum speed of 130kW, which is fine rather than spectacular. You’ll add around 180 miles in 30 minutes on a 150kW charger, which will be okay for most drivers. However, when compared to Hyundai and Kia’s new generation of ultra-fast charging (250kW) cars, you have to wonder whether Renault (and Nissan) have missed a trick by not developing the platform with an 800 volt system rather than the slower 400 volt one.

To help maximise efficiency, Renault claims to have left no stone unturned. For example, the navigation is optimised according to topography and traffic flow, while the battery is brought to the perfect temperature for charging in advance. Renault also claims that the energy management for battery cooling and interior air conditioning is one of the most efficient on the market.

Launch models are offered with a 220bhp motor that will be able to whisk the Megane from 0-62mph in 7.2 seconds. During our brief drive of the car, we found that E-Tech feels a little quicker than the figures suggest. And, unlike some competitor cars, the Megane keeps on pulling up to the legal limit. At motorway speeds, the instant shove of torque is perfect for allowing the driver to execute clean an efficient overtaking manoeuvres.

There are four levels of recuperation to choose from with the lowest being none at all and the the highest delivering proper one-pedal driving. Although we’d need to compare the two back-to-back, the Megane’s driving experience feels more composed than the ID.3s - particularly if you like to drive with a one-pedal style.

Thanks to some clever weight saving measures (such as having the motor up front), the Megane E-Tech is a little lighter than most of the competition. At 1,650kg, the 60kWh model is around 100kg lighter than the ID.3. Given that the petrol Megane tips the scales at 1,599kg, Renault should be applauded on doing a great job in keeping the E-Tech so lean.

On the road, this translates to a surprisingly agile driving experience. Although it doesn’t have quite the balance of a rear-drive ID.3 when accelerating out of corners, the Megane feels perfectly at home on a twisty section of road and delivers plenty of steering feel. Road noise is well suppressed and overall, Renault has done a great job in giving the Megane a comfortable ride quality.

Should you buy one?

Should the Megane E-Tech be on your shortlist? If you’re looking for a good-looking, five-door family hatch with a decent range, then yes. The pricing is higher than we expected though, with the cheapest model starting at £35,995 and going up to an eye-watering £39,995 - that's around £5,000 more than the Nissan Leaf and the new MG4, but is competitive with cars like the Kia Niro EV.