Volkswagen's ID.3 might get most of the attention, but the bigger, SUV-shaped ID.4 is actually a more useful car for family motorist. Is it a better used bet?

“The ID.4  has a good range, plenty of space for the family and decent performance. But there aren't many around used, so have a good look around at rivals too before you pay a premium.”

“I live in London and see hundreds of ID.4s being used as taxis. In one way it shows they are comfy, spacious and reliable. But I must admit it puts me off owning one a bit too as someone might try to hail me.” 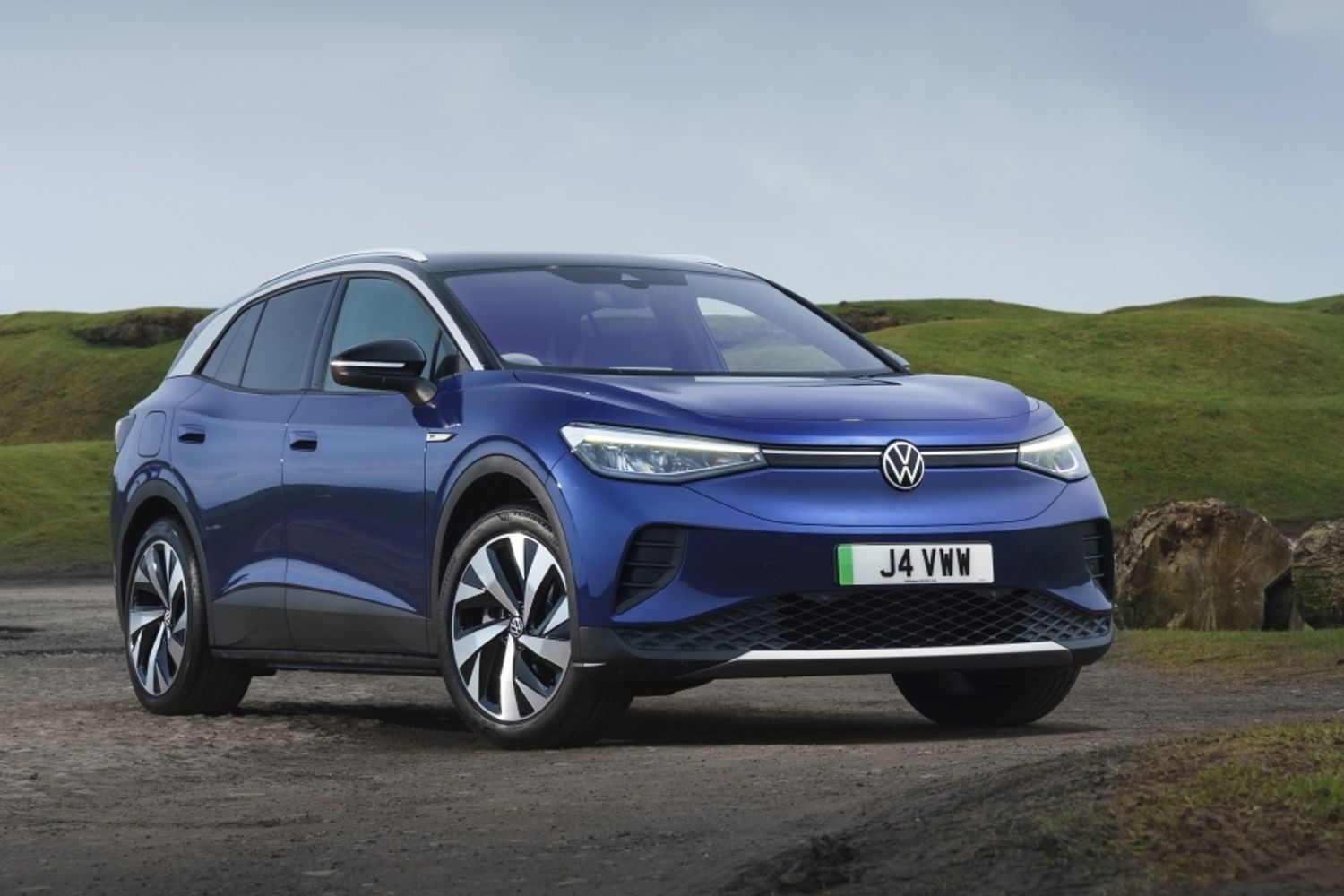 Hot cakes clearly have nothing on SUVs when it comes to sales success, and given that this is Volkswagen’s first crossover to feature fully electric drive it’s hardly surprising that demand is high. There are a lot of ID.4s used as workhorses though, so choose carefully when buying.

If you’ve read our new ID.4 review, you’ve hopefully gathered that we quite like the ID.4, so if you’re like-minded, read on to discover which of the many versions you would be wisest to go for and what you should be mindful of once prices begin to move more markedly southwards…

At launch, Volkswagen kicked off with a commemorative 1st Edition version of the ID.4 that used its larger 77 kWh battery. It took the entry level model’s already plentiful kit and added trinkets like larger 20-inch alloy wheels, a black finish for the roof and special badging. Some of these earlier launch cars are now available with mileages creeping towards the £30K mark, but unfortunately for used buyers also with prices inching only very sedately below £40,000.

The most accessible ID.4s are therefore still those equipped with its smaller 52 kWh battery, which is available in two performance levels – 146 bhp Pure and 168 bhp Pure Performance. Among the used stock the cheapest we found were 146 bhp Pure versions in entry-level City trim (which surprisingly has already been discontinued and replaced with a Life option), costing around £35,000. If you go nearly new, you might find that the dealers are asking prices which are actually above the list price, as customers are willing to pay extra to avoid the lengthy wait for a new car.

The ID.4’s design is just enough of a departure from the familiar VW template to make a statement, but without rocking the boat too severely, and that’s entirely to be expected. VW needs to ease its traditionally more conservative customer base into electrified driving gently, and this car, arguably more than the ID.3 hatchback, is a spearhead for its planned bombardment of the EV market, which will involve no less than 70 models by 2028, so the approach needed to be measured. We reckon the end result is nicely judged, and whether you prefer it to the look of the Skoda Enyaq iV and Audi Q4 e-tron, which share the ID.4’s  hardware, is of course down to personal preference – our straw poll concluded that the Skoda has the edge.

The particularly distinctive aspect of the ID.4’s appropriately futuristic-looking interior is what it doesn’t feature as much as what it does – buttons and switches are conspicuous by their absence in the minimalist cabin, which only adds to the cool, calm and collected air it exudes with its sophisticated colour schemes, slick displays, soft-touch plastics and pillowy seats.

That calm may at times be shattered, however, because as we’ve mentioned the infotainment system is a little too relaxed for comfort in its response, and the lack of physical buttons means that you need to fiddle around with touch-sensitive slider controls for regularly used functions, which can be frustrating while you’re driving, particularly at night, because curiously they’re not illuminated.

Most ID.4 models feature a single motor powering the rear wheels. It delivers 146 bhp or 168 bhp in Pure and Pure Performance forms, and in both it’s powered by a 52kWh battery. Step up to Pro Performance level and the larger 77 kWh battery is combined with a 198 bhp version of the motor, which again feeds its output through the rear wheels exclusively.

Choose entry level Life trim (formerly known as City) for your ID.4 and you then get to choose between the Pure, Pure Performance or Pro Performance motor options. These don look a little basic however, especially with the Next up is Style trim, which is available with the Pure and Pure Performance set-ups and adds touches like more sophisticated front and rear lighting, including a snazzy illuminated strip running between the headlights and the VW roundel.

From a comfort and convenience perspective the Family and Max specification levels are as good as it gets. The latter lives up to its name with a no-holds-barred equipment list including extra home comforts like upgraded 14-way adjustable sport seats, a panoramic sunroof and an augmented reality head-up display, along with an array of upgrades to the ID.4’s already impressive arsenal of driver assistance and safety tech. Both these trims are paired only with the top 198 bhp Pro Performance drive system.

That’s not the end of the road where performance and roadholding are concerned, though, because thanks to a second motor on the front axle the recently introduced GTX and GTX Max all-wheel-drive versions provide 295 bhp and an even more surefooted feel from the comfort of extremely well-appointed cabins with special GTX detailing.

Naturally these are the quickest ID.4 models, hitting 62mph from rest in 6.2 seconds and calling time at 112mph. Pro Performance versions need 8.5 seconds to do the same and stop just short of three figures with a still licence-threatening 99mph top speed. The Pure Performance and entry level Pure configurations can reach that same top speed but need nine seconds and 10.9 seconds respectively to hit 62mph.

Putting aside important factors like performance and range for a moment, we reckon entry level Life trim will more than meet the needs of most ID.4 buyers. As well as LED headlights and tail lights and a parking camera, it includes a 10-inch infotainment system with Android Auto and wireless Apple CarPlay, sat-nav, wireless smartphone charging, keyless go, climate control and heating for the front seats, the windscreen and even the steering wheel. There’s an abundance of safety equipment too, including the all-important adaptive cruise control and nice-to-haves such as high beam assist.

Plump for an ID.4 with either the Pure or Pure Performance drive configurations and you’ll benefit from 146 bhp or 168 bhp and a 52kWh battery that’s officially good for a range of up to 213 miles, depending on the package you choose and the equipment level you pair it with from the choice of Life or Style options. As we’ve previously mentioned, though, the closest we reckon you’re likely to get to this claimed range will be around 200 miles in the summer and 175 in the winter.

The Pro Performance models with their 77kWh battery naturally have considerably more staying power, shunning the socket for between 316 and 322 miles, the latter being theoretically achievable only in the entry-level 'Life' versions with the smallest 18-inch wheels. Again, don’t expect to get within a hair’s breadth of these mileages, because they were covered under artificial test conditions, but you should come pretty close. That just leaves the sprightlier four-wheel-drive GTX models, which despite their greater prowess are still officially capable of eking up to 301 miles out of a full charge.

This being a state-of-the-art electric SUV, kinetic energy generated during braking is of course harvested and fed back into the battery to optimise range potential, but it’s a shame that the regenerative system offers only two modes. Even in the most enthusiastic of these, it doesn’t produce enough deceleration to make ‘two-pedal driving’ a possibility in the ID.4, as it is with many other electric offerings.

It’s too soon in the ID.4’s life for any chinks in its armour to have revealed themselves in sufficient numbers to set any alarm bells ringing. For the time being we can only relay the fact that Volkswagen covers the car with a standard three-year/60,000-mile warranty, and the battery as a separate entity for up to eight years or 100,000 miles. It also throws in three years’ worth of roadside assistance. Watch out for cars which have had a hard life though - many ID.4s are used as company cars and even taxis.

Also make sure your car has been serviced in the dealer network, or it might have missed out on software updates to make the charging faster and the infotainment less frustrating.

Using a home wallbox or on-street point the ID.4’s 11kW on-board charger needs 8 hours 30 minutes to fully replenish the versions equipped with a 52kWh battery, or 12 hours 15 minutes to bring the 77kWh models back up to speed. The 52kWh cars can charge at up to 100kW, and their 77kWh counterparts at up to 125kW, and at rapid chargers both need around 30 minutes to restore 80% of their capacity. As we’ve mentioned previously, buyers would do well to look into VW's We Charge service for public charging – it grants easy access to 150,000 charging points across Europe and opens up preferential rates in the Ionity network.

As the first Volkswagen SUV to cross the divide between internal combustion and electrification the ID.4 carried quite a weight of expectation on its modishly dressed shoulders, and we’re glad to say this slickly executed package has largely lived up to the promise it held.

It’s not a perfect 10 – performance and infotainment arguably fall slightly short of expectations – but with a healthy real-world range in all its forms, a look that’s fittingly fresh and futuristic inside and out, plentiful space and a respectable turn of speed delivered with great manners the ID.4 is a consummate everyday pure-electric SUV.

There’s a big and unavoidable ‘but’ coming, though, because as is increasingly the case these days this accomplished VW shares the limelight with a Skoda sibling that’s even more accommodating, even more affordable and arguably just as capable. Even in these enlightened times, though, there are still buyers who would forego the excellent, and essentially identical, Enyaq iV in favour of the ID.4 on the strength of the VW badge alone, and while they might be a little worse off financially for that, we’re sure they won’t be disappointed.