Supercar performance, family car practicality. The EV6 GT looks like a bit of a bargain - even after the recent price rises - and it's be better to drive than some more expensive rivals too.

“The EV6 is already one of the most sought-after electric cars in Britain, and the the GT's performance will elevate it to become the sort of car teenagers want posters of on their bedroom walls.”

“If you haven't been keeoping up, you might dismiss the idea of a performance car from Kia. But the GT has been engineered by the same people who turned humble Hyundais into the highly-acclaimed N models.” 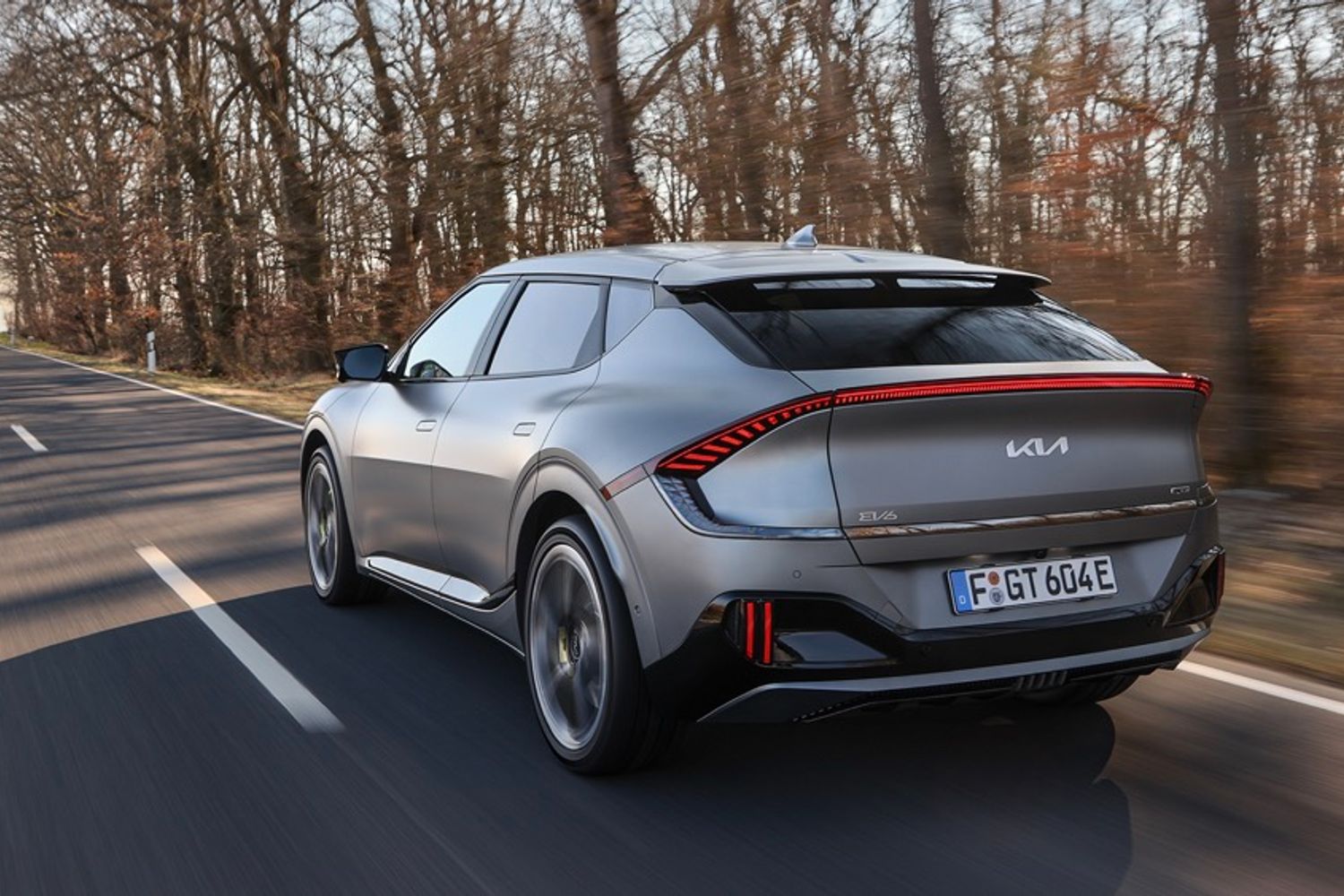 Kia has come a long way in a short space of time. A brand once famed for its mostly forgettable runarounds went electric and transformed itself into one of the most exciting car brands in the world. And it’s all thanks to cars like the EV6 – a model which has proved that the Koreans are right at the top of the electric car game.

And if the standard EV6 made rivals sit up and take notice, this new GT model is really going to blow them away. It’s the sportiest, fastest and most exotic car Kia has ever made.

You don’t need to be Sherlock Holmes to work out that the Kia EV6 GT is based on the normal EV6 that arrived last year. As you’ll probably know if you’ve tried to order one, it’s one of the most in-demand electric cars of 2022.

But what’s so special about the GT? It’s is essentially a five-door family car with the performance of a Lamborghini and a price tag that’s going to be about £100,000 less.

Underneath the floor is the same 77.4kWh battery that Kia offers in the standard EV6, plus a motor at the rear at the front. But that’s where the similarities end. The rear motor in this GT develops 362bhp while the one at the front adds 215bhp more. That’s a combined output of 577bhp.

It also has a torque output of 740 Nm. Torque is the measure of a motor’s rotational force - it’s basically what gives you that shove in the back when you hit the accelerator. And, let me tell you, 740Nm is probably enough to move me into the back seats…

It means this car is insanely quick. 0-62mph in three and half seconds is also the perfect answer to anyone who thinks electric cars don’t have a personality. It's maybe not QUITE as neck-snapping as something like a Porsche Taycan Turbo S, but definitely in a similar ballpark. If you have friends with sportscars like BMW M3s, they’re going to suddenly dislike you intensely. And the speed just keeps coming - it honestly puts a strain on your floppy bits. Where most electric cars don’t bother with top speeds much more than 100mph, the GT will hit 162mph. Apparently. I’m assuming that the battery will drain in about 30 miles at that speed, but .. .y’know… it’s nice to know that it could. If it wanted to.

Thankfully, Kia has fitted the GT with an equally over-engineered braking system. To reign in all that power, the GT has brake discs the size of dustbin lids and they work very well. ​

The EV6 GT is the work of the same engineer in charge of Kia and Hyundai’s most enjoyable cars to drive - namely the Kia Stinger and the ‘N’ performance models. That's really good news, as it means it isn't just about straight line speed. The GT comes with what Kia calls ‘GT Drive Mode.’ With the regular EV6, you can choose between Eco, Normal and Sport modes which give a progressively sportier driving experience. The GT adds a fourth mode which throws the kitchen sink at the sportiness. The motors deliver full beans, the steering reactions are sharpened and the traction control is altered to give a less 'interrupted' feel. You can also fine tune the settings to get your perfect, tailored set up.

There’s some inevitable physics at work though. The Kia has no problem making power - electric motors are good at that - but with big batteries comes heft. The battery alone weighs 486.7kg - nearly half a tonne - and despite all the magic going on, you never quite lose the feeling of mass - especially on the brakes or when you make a very quick change of direction.

But the EV6 GT is still surprisingly agile when you’re going fast on a track, but also just like any other EV6 when you‘re quietly cruising on a nice road.

It also has a secret - Drift Mode. We can (and we do) argue about whether electric cars should have a setting which is designed to toast tyres, but the EV6 GT can, easily. If nothing else it will help convince petrolheads that electric cars can do things they think are cool.

If you are more impressed with charging speeds than burning rubber, then you may already know about the EV6's party trick when it comes to charging. It has an 800 volt electrical system which in the electric car world, is cutting edge tech.

Why? The higher the voltage, the lower the current needs to be to charge it. A lower current means less heat is generated, which means you can add energy at a much higher rate. What that means in waiting times is that this car can charge to 80% in under 20 minutes on a 350kW charger.

But because there’s the option of more power, the GT gets a slightly lower WLTP range figure than the others at 263miles. But that’s still plenty.

And, like the normal EV6, the GT comes with a Vehicle 2 Load or or V2L system that allows you to power any device. So when you’ve finished beating Ferraris away from the lights, you can pull over and make yourself a nice cup of tea to celebrate.

The good news is that the EV6 isn’t a concept car or a one-off to go racing or rallying with. You could have the keys to one of these by the end of the year for the not insignificant sum of £61,595.

Now, that’s clearly a lot of money – and more than Kia has ever charged for one of its cars. But let’s put that price into perspective. In terms of bang per buck, we don’t think there’s anything to beat the EV6 GT. The Tesla Model 3 Performance can match it on acceleration, but will cost you £995 more. The Ford Mustang GT is slower (and not as dynamically impressive) and a whopping £11,235 pricier.

A Porsche Taycan Turbo is fractionally quicker to 62mph but costs so much, you could actually buy two EV6 GTs and still have change left over.

The Kia EV6 is an expensive car. But for the performance, ability and specification, It's actually very keenly priced. It’s not an out-and-out sportscar, but the changes do add an extra element of driving fun to the EV6 experience which wasn’t present before.