The ID.5 is a good-looking coupe version of the ID.4 SUV. The GTX version isn’t as sporty as promised, though, and rivals have a lot more performance.

“I'm not sure I get the whole coupe SUV thing - you are paying more money for a less practical car. Still, the ID.5 does look pretty good and it still has a huge amount of space. ”

“Volkswagen's sleeker version of the Passat - called the Arteon - is a really good looking car. The ID.5 isn't quite as drastic a transformation from the ID.4 but it's still a stylish alternative for anyone who doesn't want to go for a full SUV.” 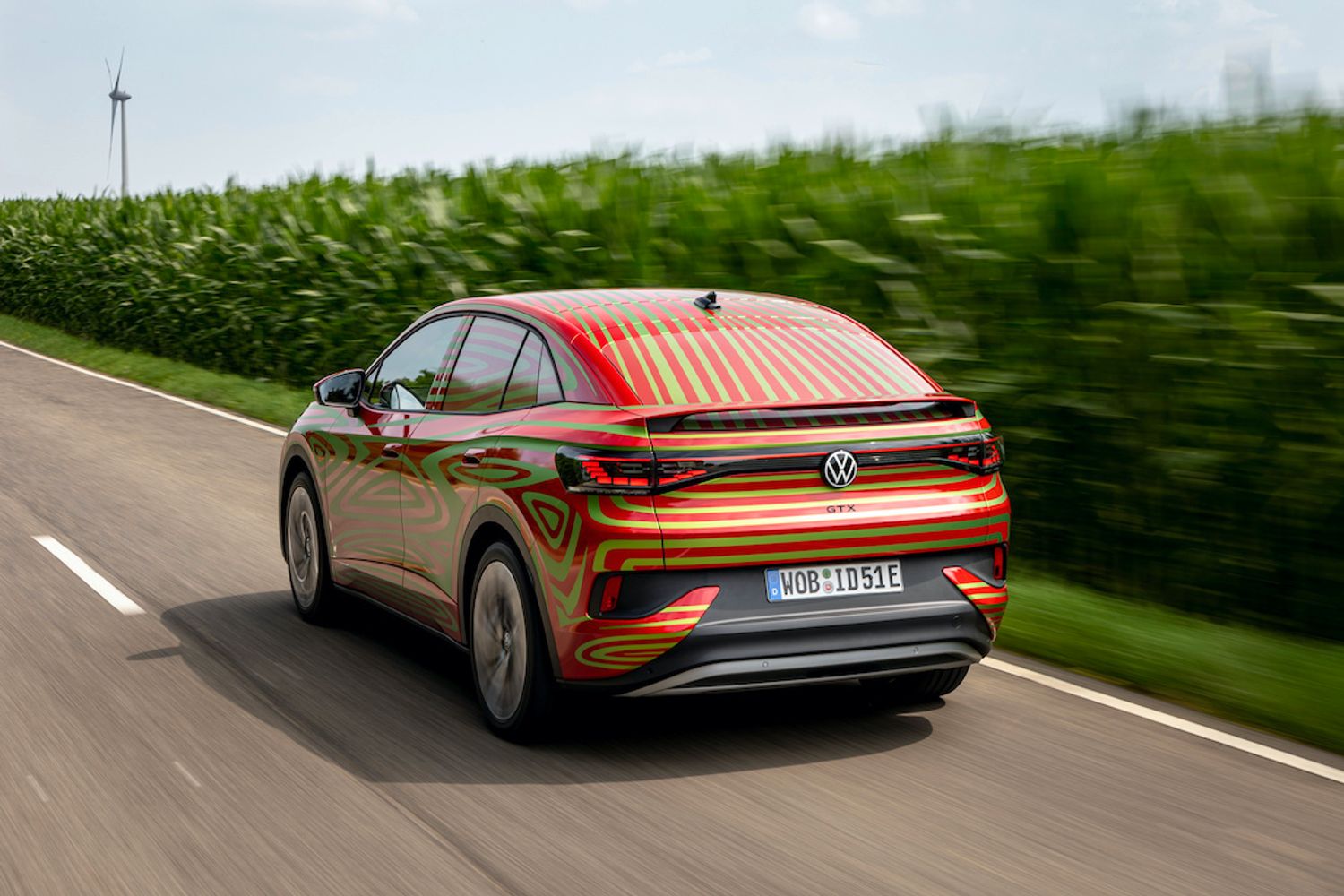 It's always been pretty straightforward in Wolfsburg, the home of Volkswagen. In VW's rule book, SUVs were large and practical. While BMW, Mercedes and Audi all followed the trend of trying to turn off-roaders into swoopy coupes, Volkswagen steered clear of such frippery.

That was then, though. Now Volkswagen is leaving no stone unturned in the race to win sales in the world of SUVs, and in particular electric SUVs. This, the ID.5, is not just the firm's first electric coupe-SUV but its first coupe-SUV in general. But is VW a bit late to the party and does the new ID.5 impress? We grabbed the keys to a pre-production GTX prototype, finished in garish camouflage, to find out.

The first thing to mention is the coupe-SUV is ID.4 SUV launched earlier this year. The new ID.5, arriving in the UK in early 2022, becomes the third model in VW's ID pure-electric range, and it also has the task of spearheading Volkswagen's new sporty range of electric models, badged GTX.

Just as you’d expect, there are few visual differences between the ID.4 and the ID.5 save the roofline. While the ID.4’s roof extends in a gradual curve to maximise rear headroom and boot space, the ID.5’s steeply slopes downwards in a more traditionally coupe-like fashion. The rear window is more raked, too, and there’s a neat integrated rear spoiler. Coupe-SUVs can sometimes look a little dumpy, but the ID.5 is rather good looking in our eyes.

The sloping roofline doesn’t impact too much on interior space, either. While there’s noticeably less headroom than the family-friendly ID.4, there’s still plenty of it, and VW has been clever with the packaging. Six-foot passengers can slide the rear seats forwards ahead of where the roof really starts to steeply drop down, meaning their heads don’t brush the roof too much. And thanks to the ID.5’s long wheelbase, even when the seats are slid forwards, there’s still plenty of kneeroom.

While the body is different, the two SUVs are identical underneath. The ID.5 we drove was in range-topping GTX trim, so it gets a pair of electric motors – a 201bhp motor for the rear axle, and that’s paired with a 107bhp motor for the front wheels, making the GTX four-wheel drive. In total there’s a pretty punchy 295bhp, which is good compared to other Volkswagen ID models, but pretty tame compared to the Tesla Model Y Performance (expected to be around 450bhp) and the 480bhp on offer in the Ford Mustang Mach-E GT.

In contrast to the ID.4, the ID.5 is likely to be arriving in the UK first in GTX guise. GTX is VW’s new electric sporty badge – an electric GTI, supposedly – and will have the task of converting petrolheads to the benefits of electric performance motoring. Thanks to those two electric motors, the ID.5 GTX is very quick to accelerate and feels quicker than its claimed 6.2 seconds 0-62mph sprint time.

Just like with the ID.4, VW has also fitted a Vehicle Dynamics Manager which tweaks the electronic differentials to aid fast cornering, and it does a good job. Like its SUV sister, the ID.5 is quick to change direction and goes around corners in a balanced way, backed up by accurate, if slightly numb-feeling, steering.

Most of the time the ID.5 GTX disguises its two-tonne weight very well, but for those people expecting GTI-like agility and balance, the GTX does sometimes get caught out when driven quickly and feels heavy. No amount of electric trickery can make two tonnes disappear. It’s for this reason we’d expect lower powered, non-GTX models with rear-wheel drive to make more sense, as just like with the ID.4, the standard models are more than good enough and the GTX doesn’t do enough to show its sporty colours.

The GTX’s two electric motors are fed by a 77kWh battery, giving a 308-mile range – that’s 10 miles better than the ID.4 GTX’s range, which goes to show just what a more aerodynamic body shape can do. However, what’s not so good is the ID.5’s 125kW maximum charging rate which allows 186 miles of range to be added in 30 minutes. Hyundai and Kia with their 800-volt hardware simply embarrass the ID.5 in this area and can add far more range in the same time period.

Volkswagen hasn’t confirmed prices for the GTX variant or, indeed, the complete UK line-up, but we would imagine there will be a £1,700 premium over the ID.4. That means the GTX could cost around £57,000 which is a lot of money. But who said a coupe-SUV is good value for money?